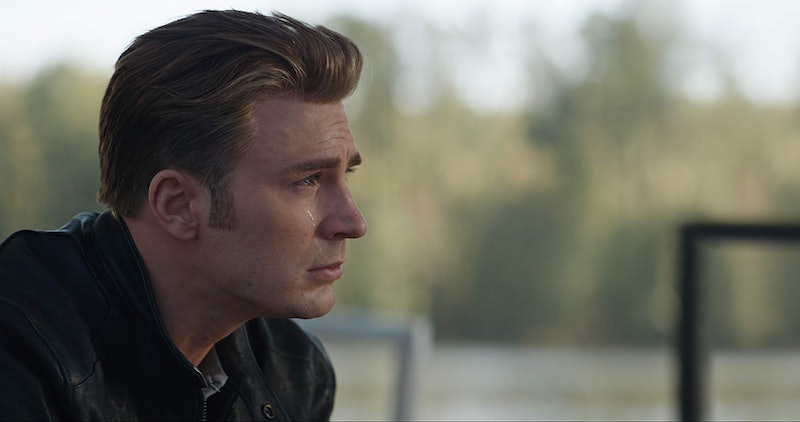 We've seen Steve Rogers a.k.a. Captain America (Chris Evans) go on quite a facial hair journey throughout his time in the MCU. He went from being a scrawny, clean-shaven cadet in Captain America: The First Avenger to embracing the glory of a full beard in Avengers: Infinity War. The all-American hero, who usually looks like the boy-next-door, debuted the rugged lumberjack look in that film, likely due to the fact that he and some other Avengers were in hiding and operating as vigilantes post-Civil War, after breaking the Sokovia Accords. And it wasn't just the audiences that noticed, because even Thor drew attention to the beard, and accused Cap of stealing his look. It's gone in the trailers for Endgame, though. So what happened to Captain America's beard?

While the full beard look was embraced by fans, Steve never explains why he grew. Did he just not want to risk being identified going into a Walgreens? Or did he want a physical manifestation of his newfound rebel identity? Whatever the case, it's undeniable that the Cap can pull any look off. (Well, maybe not that mustache Evans grew that one time.) But when the Avengers: Endgame trailer debuted, fans couldn't help but be disappointed to see that he'd shaved it all off, without a shadow of scruff in sight.

At present-day Endgame time, the world and the entire universe is in a much larger mess than anything the government could have ever imagined back in Civil War. It's pretty safe to assume that no one's concerning themselves with the Sokovia Accords, or actively hunting the Avengers down to hold them accountable for breaking their deal with the U.N. So Cap, as far as we can tell from the Endgame trailers, is no longer in hiding and has rejoined society — or, at least, what's left of it. With all of this in mind, maybe he's decided to finally decided to pick up a shaver?

There's a scene in one of the final trailers for Endgame wherein Rogers stands in front of a bathroom mirror sans beard. He's obviously got a lot on his mind, what with his fallen comrades, the new plan to defeat Thanos and save the universe, and the actual execution of the plan with half of their team still missing. It could very well be moments before this scene that the Cap decided to stress-shave.

Honestly, nothing's certain until Endgame when it premieres on April 26. And even then, there's no guarantee of a solid answer to this stubble dilemma. Chances are, the movie won't even acknowledge the great loss of the Cap's beard — which, I mean, is totally understandable because there are bigger things to worry about.

However, we'll stick with the theory that Captain America bid his luscious facial locks goodbye because he wanted to go back to his classic look. He most probably only grew the beard in the first place for the same reason Black Widow (Scarlett Johansson) went blonde, which was to hide her identity after Civil War. Now that he's free to do whatever he wants and has no reason to fear being identified, he chose to shave it all off.

As great as it would have been to see Rogers wearing that cool new Avengers suit with his Infinity War beard, we've got to respect the Cap's wishes and his own personal style. But here's to hoping he'll grow it out again, or that actor Evans decides to grow it out, once he retires the shield.