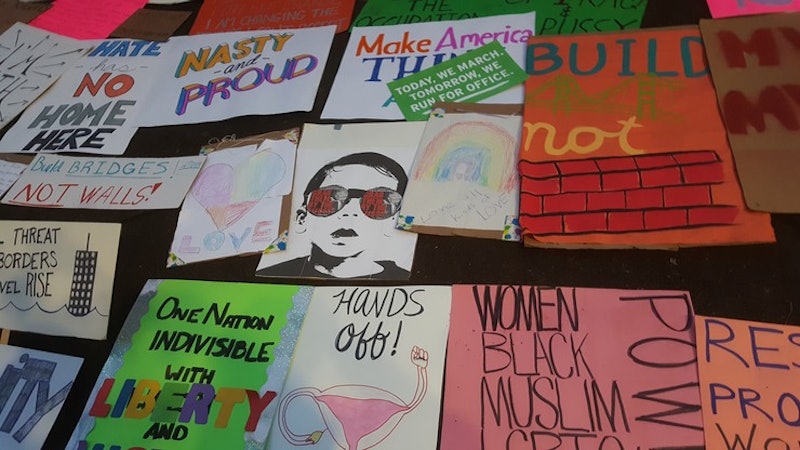 When five Northeastern University professors came across all the signs scattered across Boston Common after the Women's March, it struck them as a visual representation of the many concerns people have about Trump's presidency. So, these scholars are preserving the Women's March signs for future generations to better understand this moment in American history. Just as the signs were about to be thrown away, Nathan Felde, Alessandra Renzi, Dietmar Offenhuber, Lucas Freeman, and Alifa Rachmadia Putri picked up over 1,000 and drove them to a storage unit with plans of moving them to the school's archives. Northeastern's library is currently figuring out exactly how to preserve the materials.

The signs on display said everything from "Love Your Mother" to "Build Bridges, Not Walls." It's not clear precisely what Northeastern's library will do with them yet, but publishing copies or incorporating them into an exhibit are possibilities.

"The collection of original signs has a great material presence that is much rarer to find when so much activism happens on social media and rallies tend to have pre-made similar signs that are distributed by the organizers and then collected again," Renzi, an Assistant Professor in Emergent Media, tells Bustle over email.

For Offenhuber, an Assistant Professor in the departments of Art + Design and Public Policy, the sheer volume and diversity of the signs revealed that the protest was "not about a single message, but a wide variety of civic issues brought together by shared concern."

Renzi called the march "part of the largest mobilization for social justice in U.S. history." Indeed, over two million people in the United States participated. This attendance "speaks to the mood of the time: the hope and fears of a majority of citizens, not just women," Renzi added. "It also reminds us that similar protests took place in the past, and that there is a renewed urgency to defend women’s rights, this time, hopefully, from a more intersectional perspective. In the '70s, women of color, indigenous women, and gender-non-conforming women were kept out, or at the margins of the movement. Today, this should no longer be the case."

The scholars don't just see the signs as representing the Women's March itself. They view them as a testament to multiple social justice movements that are mobilizing right now. "These groups are otherwise involved in struggles for social, racial, migrant, labour, and environmental justice on a daily basis," said Renzi. "They were doing this before the inauguration and will continue to do it now that there are new urgencies."

And, accordingly, Renzi wants to remind people that the struggle isn't over now that the march is. "I think the important work to make the world a better place takes place through daily engagement and organizing," she said. "Volunteering, advocating, educating, having productive conversations, having someone’s back, and speaking up for injustice when we see it."

More like this
How To Politely Reject Someone Who Keeps Asking You Out
By Laken Howard and Lexi Inks
Bustle Daily Newsletter: October 4, 2022
By Hayley Schueneman
Black History Month UK’s 2022 Theme Calls For Action, Not Words
By Maxine Harrison
Chris Kaba's Family Continue Fight For Justice After Viewing Police Bodycam Footage
By Sophie McEvoy
Get Even More From Bustle — Sign Up For The Newsletter