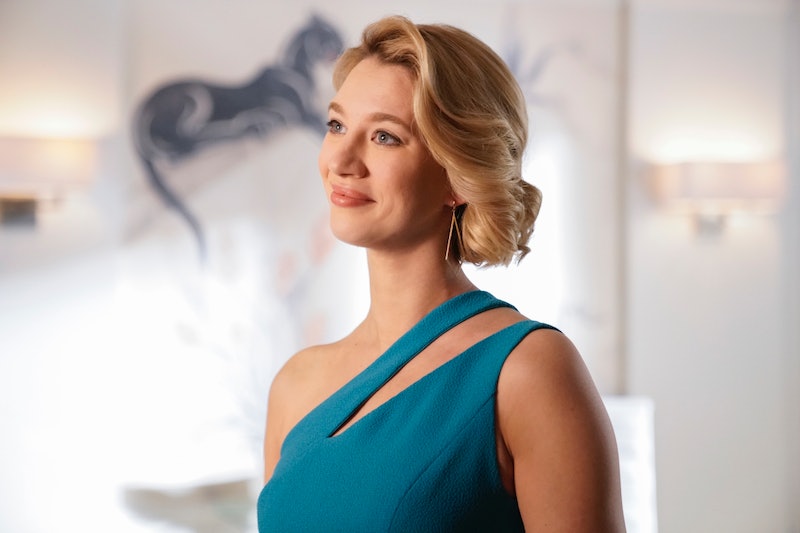 Petra has gone from being one of the more villainous characters on Jane the Virgin to trusted confidant of our heroine. So while Jane and Rafael are poised to get their happy ending with Petra by their side, what will happen to Petra on Jane the Virgin during the final episodes? After losing her girlfriend JR (farewell, Rosario Dawson!), things finally started looking up for Petra in Season 5 when she conned Milos out of owning the Marbella. The hotel is all hers now, thanks to her tortured assistant Krishna. But with six episodes to go, there's bound to be some more high-stakes drama. And as Petra's life might be even more telenovela-twisty than even possibly Jane's, there's reason to be concerned for your favorite formal-short-wearer.

Jane the Virgin showrunner Jennie Snyder Urman may not be so trustworthy anymore after she acted like Michael was really dead back in Season 3. But she has teased some major, life-altering events for the final episodes of Jane the Virgin. Urman told TVLine ahead of the Season 5 premiere, "Jane always has a pregnancy around the season finale, and that will happen." And she added, "There are deaths. It's a telenovela. People are going to have to die."

If what Urman said back in March holds true, then audience members can expect a pregnancy and multiple deaths before the show is through.

With Petra having such a chaotic life, it seems reasonable to think that one of these impending plot points will impact her. Especially since Urman hasn't offered many hints about Petra's future when talking about the final season of Jane the Virgin.

Urman told TVGuide that "the way that [Petra and Jane are] there for each other is a really important part of our last season," which has continued to be true. And she told TVLine after the Season 5 premiere that Petra's relationship with JR was "important in this season in many different ways" — another true statement. But what else is in the cards for Petra? Urman hasn't really said.

But speaking of cards, Petra's mom Magda returned to the Marbella as a tarot card reader in "Chapter 85." As her twin sister Anezka — and her brother-in-law Scott — are evidently both dead, Magda is really all the biological family that Petra has left. JR helped break their bond (literally) when she used an ax to separate the handcuffs that connected Petra and her mom.

But there's no way that was the last we'll see of Magda, so she will probably pop up and cause trouble for Petra one last time before Jane is over. Perhaps Magda will even be working for Milos as he's stuck in prison and most likely bitter that Petra tricked him.

As for the death hints from Urman, Magda is a great candidate for a character to die in the last few episodes. It doesn't seem likely that the unscrupulous Magda could be rehabilitated like Petra was, so it would be a death that's not so painful for fans. On the other hooked hand, it would be completely devastating if Petra herself died. But because she has become so close to Jane and mended her relationship with Rafael, that just might be the type of cruel emotional blow that Jane the Virgin wants to deliver to viewers.

When it comes to pregnancies, Petra seems content with being mother to twins Anna and Elsa so it would be a real shock if she were to become pregnant. But a more feasible theory is that this single lady will get another chance at love.

This writer is still holding out on the possibility that Petra and Michael could get together for a truly telenovela-inspired twist. And even if you don't like the sound of that theory, it's far better than Petra ending up dead. But a truly delightful end to Petra's story would be if her game-changing love JR returned.

As Petra's complicated past of being a street performer in the Czech Republic has always caused issues for her in the present, fans should prepare for it to haunt her at least one last time. Because while things are looking fantastic for this entrepreneur career-wise right now, no one is ever safe on Jane the Virgin — not even the survivor Petra. Here's hoping that whatever happens though, she's standing by Rafael and Jane's side when they tie the knot and that she manages to get her own piece of a happy ending too.