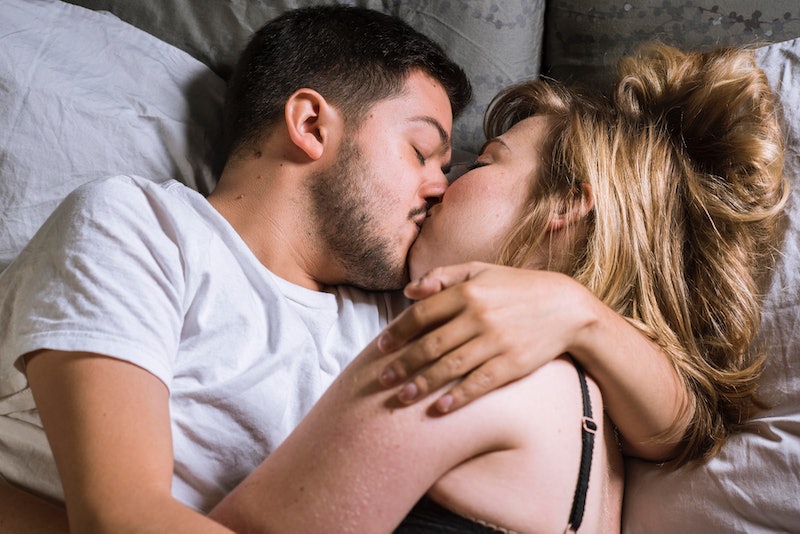 You may have learned about the birds and the bees growing up, but the reality of what controls our sexuality much more complicated — it's all about hormones, neurons, and a whole lot of science. And new research shows that a little brain chemical called kisspeptin is responsible for a lot of our sexual behavior — and our sexual attraction. The study, published in the journal Nature Communications, found that kisspeptin controls our attraction, and they made the discovery by studying mice.

"In female mice, we can say that these kisspeptin neurons act as a central hub in synchronizing ovulation with sexual behavior," Professor Julie Bakker, who is leading the Laboratory of Neuroendocrinology at Liège University and was the one of the research leaders on this study, tells Bustle. "Kisspeptin is also present in humans and has a very similar function in stimulating fertility. There are actually already clinical trials in the UK going on in which kisspeptin is tested as a treatment for infertility."

But that's not the really exciting part — kesspeptin had been previously linked to our sexual behavior, including changes around puberty and fertility. It's the fact that the new research links behavior and attraction that's a breakthrough, because it could lead to developments in how we address low levels of sexual attraction. And there are plans to study exactly how this plays out in women, rather than just looking at mice. "Now it would be of course interesting to test whether kisspeptin stimulates sexual desire in women and we are actually going to conduct such a study: we are going to measure brain activity using MRI upon exposure to sexual and emotional stimuli in women treated or not with kisspeptin..." Bakker says. "We are about to start this study, we are in the final stage (just testing some of our MRI tasks), but we will start scanning very soon (within a couple of months)."

And that's really exciting because, once they establish the effect on women's sexual desire, this new information about kesspeptin has a lot of potential improving some women's sex lives.

Why Is It Important?

So why do you need to know about a hormone that you can't really control? Well, it could have a large impact for those who have struggle with low sexual desire. Understanding what triggers attraction is the first step toward addressing problems achieving it.

"If kisspeptin indeed stimulates libido in women, then we can foresee its application as treatment for low libido in women, but of course some additional studies will be needed then," Bakker says. "For instance kisspeptin can only be administered by injection at the moment (it is a peptide, you can't take it orally, it will not 'survive' the stomach). So we need to think about developing kisspeptin as some sort of pill. Perhaps another possibility will be a nasal spray. For example oxytocin (which is a peptide as well) can be delivered by nasal spray so perhaps it can be the same for kisspeptin?"

So this new discovery of kisspeptin could, theoretically, lead to new treatment options for women suffering from low sexual desire. And there's clearly a need — researched published in the Obstetrical & Gynecological Survey found that between 30 and 50 percent of women suffer from some form of sexual dysfunction, including decreased libido and problems with arousal and lubrication.

Now, you should never have sex that you don't want to have, obviously. And some people are happily asexual. But there are women out there who want to want to have sex — who want a higher sex drive than they currently have. It's clear from the demand for products like Nuelle's Fiera, an arouser and sex "pre-hancer" intended to help increase libido, that some women are looking for a way to increase their sexual desire.

While the Fiera and arousal gels may be great options for some, it's exciting to think that this finding about kesspeptin could perhaps lead to addressing the cause of low sexual desire.

Kisspeptin has been known as a big player in our sexual behavior for a while among researchers, but it's new link to attraction might have some major real-world impact. So for some of us, it's just an interesting bit of knowledge, but for those suffering from low sexual desire and looking for a way to increase it, well, this is potentially a big step forward.