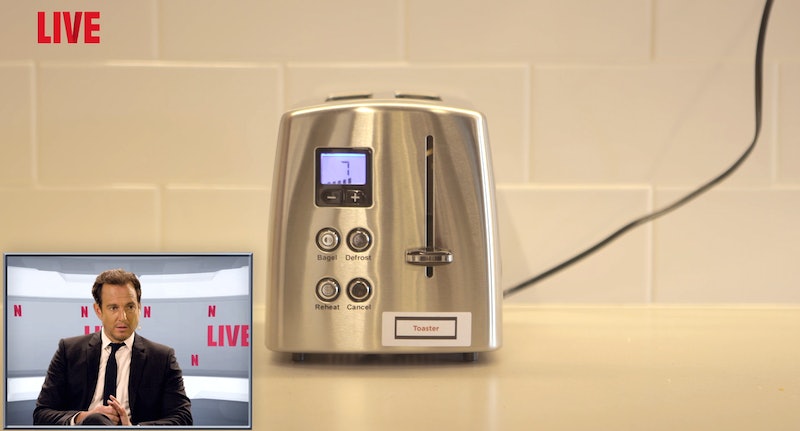 If you were perusing Netflix in the wee hours of March 31, then you most likely stumbled across Netflix Live. As you got sucked into Will Arnett narrating random objects around the Netflix offices, you may have been naive like me and believed that Netflix Live could be a real thing. Of course, I didn't think Arnett giving commentary about the drama of a toaster was going to be the future of the streaming site, but I did consider this could be a funny approach to launch a new Netflix product. Yet, once you take into consideration the company's long history with pranks, it becomes clear that Netflix Live is its April Fools' Day joke for 2017.

When you go to the Netflix homepage on March 31, you will see "Netflix Live: Sneak Peek." Although not actually "live" (the 48-minute running time is a dead giveaway), the program tricks you by saying its "Connecting to Netflix Live." It then launches right into Arnett giving commentary about a copier in an office. As he ponders who looks good in office fluorescent lights (the answer? Ashton Kutcher and his angular face), you know immediately you are in for a real treat even if you have no idea what you are watching.

Netflix Live only gets better and more bizarre from there. With a microwave, toaster, pencil sharpener, parallel park job, and puddle all being subjects of Arnett's "live" commentary, the 48 minutes will fly by and you'll start wishing that Netflix Live would be a real thing.

But, alas, hoping for Netflix Live to be real is most likely more futile than that person's attempts to parallel park. After some fast and furious Googling, I discovered there was once a time when Netflix discussed potentially live streaming sports — but only if Netflix owned and created the sporting event. You'll also find that Reddit users started wondering if Netflix Live could be real and quickly surmised it was a prank. Then, once you remember all of the other times that Netflix tricked you on April Fools' Day (there's even a whole Wikipedia page dedicated to Netflix's April Fools' Day jokes), you'll realize that they just pulled a fast one by releasing this year's joke a day early.

If you need a refresher of Netflix's past pranks, for 2013, Netflix unleashed highly specific categories, like "Movies Starring Estelle Getty and Some Other Guy." For 2014, Netflix released food-themed "Netflix originals," like Sizzling Bacon. If you were marathoning shows during April Fools' Day 2015, public service announcements would pop up to tell you to stop. And John Stamos memorably took over Netflix for 2016.

This year, it looks like it's Arnett's turn to prank Netflix viewers — and perhaps playfully mock Facebook Live in the process. Besides promoting his many Netflix shows (seriously, there are so many), the actor will have you chortling at objects you never thought you'd chortle at — like grass. There are even surprises that I won't give away except to say look out for the two people who are thumb wrestling.

And, if after watching Netflix Live, you're still wanting more, be sure to visit Netflix on actual April Fools' Day — April 1 — since the end of the video directs you to, "Tune in tomorrow for full coverage." I can't wait to see what bland object Arnett will give colorful commentary about next.

More like this
Taylor Swift Wanted To Be In 'Twilight: New Moon,' According To Its Director
By Grace Wehniainen
Jonah Hill Explains How His Anxiety Attacks Will Change The Rest Of His Career
By Grace Wehniainen
Here’s Where Manti Te’o Is Now
By Arya Roshanian
Florence Pugh Won’t Discuss Harry Styles Sex Scenes In 'Don’t Worry Darling'
By Grace Wehniainen
Get Even More From Bustle — Sign Up For The Newsletter