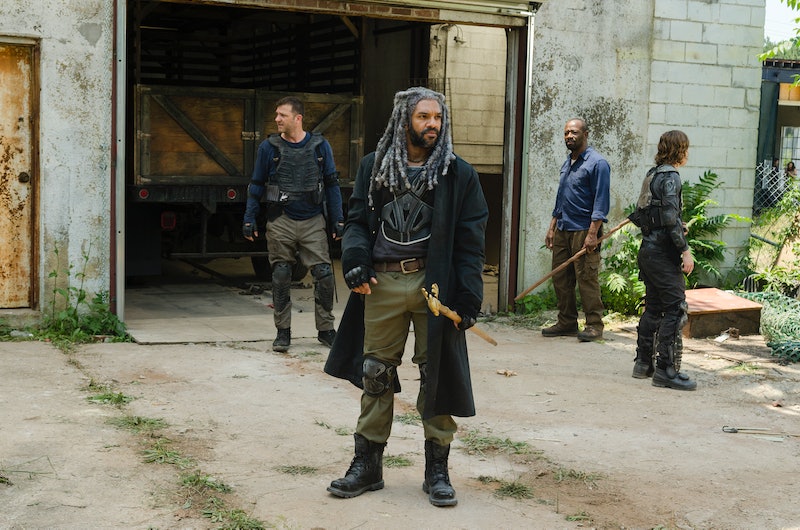 Each person in charge in the zombie apocalypse has his or her own leadership style (and if you're Rick Grimes, you may have a totally different leadership style depending on the day). Ezekiel on The Walking Dead prefers to keep his community uninformed about the Kingdom's arrangement with the Saviors. While that isn't how every person in power would handle the situation, that's how this zookeeper/community theater actor turned tiger owner/zombie apocalypse royalty has chosen to handle communications. As it seems that a war will be brewing between the other communities and Negan's group when Season 7 returns on Sunday, Feb. 12, the Kingdom's deal with the Saviors on The Walking Dead may be coming to an end. Yet, Ezekiel's people have had a pretty sweet setup until now.

When The Walking Dead introduced the Kingdom in the second episode of Season 7, "The Well," they appeared to be a peaceful and thriving group — making time out for the arts and education. However, they are not untouched by the Saviors, it's just that Ezekiel has kept his negotiations with Negan's crew secret from the general public of the Kingdom. As they are quite willing to call a man "king" and just go with the flow, the majority of the Kingdom doesn't seem very hardened, so though I'm more of an "honesty is the best policy" type of gal, I kind of understand why Ezekiel has kept his followers blissfully ignorant.

Although Morgan and Carol arrived at the Kingdom after Ezekiel's arrangement with Negan had already been established, The Walking Dead revealed that Ezekiel and his most trusted people go to a location away from the Kingdom to provide the Saviors with supplies. While "The Well" showed them handing off zombie-fed pigs, the Savior in charge of the Kingdom runs, Gavin, noted that the next week would be produce, so the goods change on a weekly basis.

Gavin also took stock of how much the Kingdom was providing and noted there would be consequences if they were ever short in their handoffs to the Saviors. So, not only is there a rotation of goods each week, but there is a quota that Ezekiel and his people must fulfill to satisfy the Saviors' demands. While most of the people in the Kingdom are unaware of these transactions, if Ezekiel does not meet these specific requirements, his town would surely feel the wrath of Negan. Heavy is the head that wears the crown.

In a video for AMC, showrunner Scott M. Gimple discussed the new communities that were introduced in Seasons 6 and 7. He noted how Negan treats Ezekiel from the Kingdom and Gregory from the Hilltop differently than how he treats our main man Rick. When speaking of the relationship between the Kingdom and the Saviors, he said:

"[Negan] did see strength in Ezekiel, but Ezekiel saw strength in them and they've managed to make an agreement with the Saviors without the Saviors ever stepping into their world. Ezekiel is getting them goods and it just seems that it's a tentative sort of peace."

The peace being tentative was something that was alluded to in the Season 7 midseason finale when Kingdom member Richard approached Carol and Morgan. Richard noted that he doesn't think the Kingdom and the Saviors can coexist and expects the Saviors will eventually destroy the happy community. Unfortunately, both Morgan and Carol denied his request to convince Ezekiel to come up with a plan to fight the Saviors, but thankfully, it looks like the Alexandria group will be coming to the Kingdom in the second half of Season 7 to form an alliance.

The Kingdom is still a nice place to live, even with the deal with the Saviors, but the members of the community deserve to know that there is a massive threat looming right outside of their gates. However, whether or not Ezekiel makes a royal decree about his arrangement with the Saviors or not, I assume the general population of the Kingdom will be finding out about Negan soon enough.