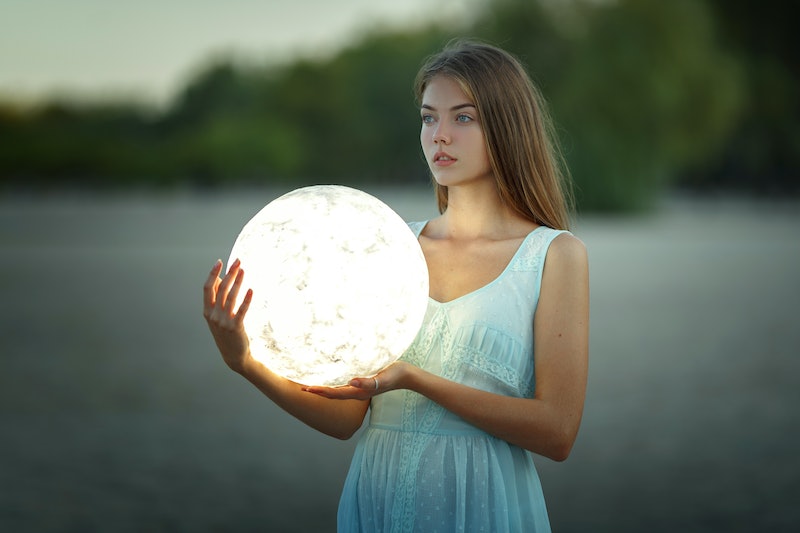 The first full moon of the new decade is headed our way, and it's definitely living up to any and every monumental expectation you might choose to place upon it — because it also happens to be a lunar eclipse, here to rock our world as eclipses love to do. But it's likely that the January 2020 lunar eclipse full moon will affect the new year far beyond this weekend. The changes taking place now are set to influence our lives over the first half of 2020, as we'll see the themes and issues it's bringing up linger up through the next set of eclipses that will begin in June of this year. This series of eclipses and their ongoing influence is known as an eclipse phase.

"The January 10 lunar eclipse combines with the December 26 solar eclipse to form an eclipse phase that lasts until the lunar eclipse on June 5, 2020," shared astrologer Jamie Partridge of Astrology King. " The December 2019 solar eclipse was ... very fortunate. But combined with this ruthless lunar eclipse it suggests the strong will consolidate their power, the rich will get richer, and the poor will get poorer." This eclipse is dealing with issues of authority (Capricorn territory) and safety (Cancer territory), and there are some intense aspects that give off an authoritarian air. This simply means that in the areas where we do feel powerful and strong, we must use that power for good, and reach out to help others who need a hand during this rocky astrological time.

But let's pause on that and discuss this question: What is an eclipse in astrology? During eclipse seasons, the Nodes of Fate (also known as the North and South Nodes), which represent lessons of the past and the fate of our future, are activated by the moon. Currently, the Nodes are in Cancer and Capricorn, which align with the recent series of eclipses (the eclipse during the Dec. 26, 2019 new moon was in Capricorn, while the upcoming full moon eclipse will be in Cancer). And the upcoming Jan. 10 eclipse is actually part of an even longer, nearly two-year eclipse cycle that began back in the summer of 2018. With this cycle finally concluding, we'll see the themes, issues, and life changes that come up for us now linger through the lunar eclipse on Jun. 5, which begins a new eclipse series on the Gemini/Sagittarius axis —and we'll want to be prepared.

Astrologer Nura Rachelle, also known as Moon Mystic, spoke with Bustle and broke things down further. "The January Full Moon Eclipse is happening at 20˚ Cancer," she explains. As mentioned, the North Node (which represents the energy we should be embracing and striving toward as we move into the future) is also in Cancer, alongside the full moon. "Of course, the South Node [is also] considered here," continues Rachelle, "as having the Full Moon within a close enough orb of the South Node (at 8˚ Capricorn) is what makes this an eclipse." (Here's an explainer on the North and South Nodes if you'd like to dig a little deeper!)

So let's get back to how this affects us on a personal level. Because of the nature of this Cancer/Capricorn axis, the energy we are dealing with during these eclipses have to do with safety and security — and this applies to our emotional states of being just as much as it does our literal and financial ones. Eclipses always bring an air of unpredictability. Unlike a typical full moon, which is useful for bringing projects to a head or a conclusion, a full moon eclipse is more likely to bring realizations, often of the unexpected sort. Ask yourself: What was coming up for you during the last eclipse during the December 2019 new moon? You're likely to see a continued thread of energy under this upcoming luminary, but with a shift toward the emotional and spiritual rather than the physical or financial.

With this full moon in Cancer (which is the sign ruled by the moon!), we'll be dealing with matters of our emotional safety, comfort zones, and what makes us feel nurtured — and given the eclipse-y energy, these parts of our lives may feel a bit unstable, which can be scary and unsettling. "This eclipse will make us access our shadow self," explains astrologer Lisa Stardust, who spoke with Bustle. "We can avoid personal drama if we embrace our emotions and sentiments. Being kind to ourselves and others is essential." Allowing space for our feelings and sentimental values under the Cancer moon is a must during this eclipse.

Nerve-wracking as it may be, we can expect the events, realizations, and emotional breakthroughs that take place under this full moon to ultimately help align us on the right path — or perhaps put us on new paths entirely. That said, you'll want to keep track of what changes are afoot and how you're feeling: "On Friday it’s best to keep a journal by your side, especially with Mercury tightly conjunct the sun," advised astrologer Six, who spoke with Bustle. "It’s possible that new opportunities and plans can arise, propelling some of us into long-term projects."

We may feel a lack of control due to the effects of the eclipse, but should trust that it's for the best — and know that it's not over, either, because we'll be dealing with these themes for the first half of the year. The energy that surfaces now will be worked on continually and revisited throughout the coming six months. Pay close attention to what matters arise for you emotionally and otherwise under this lunar eclipse, as you'll find that things come full circle during 2020's halfway point, marking the end of this Cancer/Capricorn eclipse cycle.