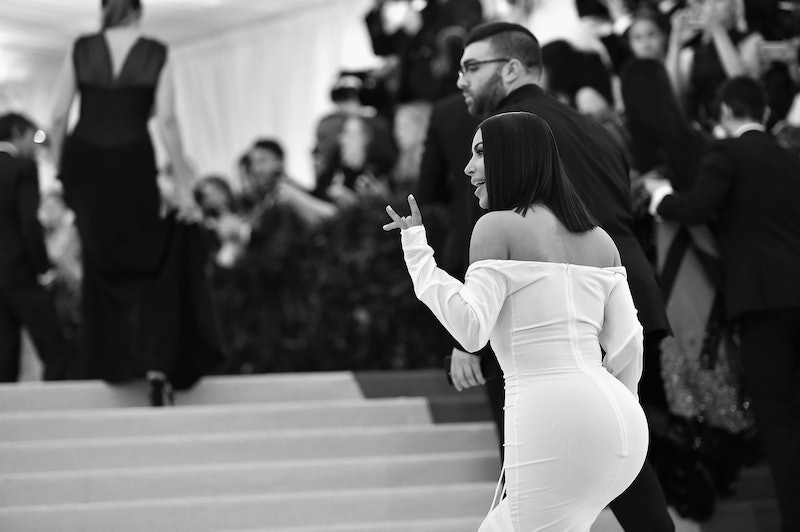 If you take a moment to ponder the perfect butts throughout history, many shapes and sizes will likely come to mind. We've all appreciated J Lo's curves, for example, as well as the tiny pertness of a Victoria's Secret model's derrière. Venus and Serena Williams also stand out for their athletic glutes, as do the gorgeous ladies known for their larger butts like Kim Kardashian West and Amber Rose.

Clearly, there's a wide range of what's considered"perfect," and it seems every shape and size has had its day. Ideal butt shapes change all the time according to prevailing fashion trends, which celebrities are most popular, and even what's going on in the economy. That's why, no matter which type of butt you have, it's important to keep in mind no one shape is actually "perfect." In fact, the ideal is often just an over-the-top version of what's popular at the moment — and thus not worth your comparison.

"Cultural ideals of body shapes have tended toward illustrations of extreme versions of cultural ideals," Dr. Melanie McNaughton, PhD, an associate professor of communication studies, tells Bustle. Whenever fitness is in fashion, suddenly butts have to be round, high, and super toned. And when bigger butts are in vogue, then the ideal includes bums that are extra big. If you don't meet the criteria, it can feel like you're not beautiful. But that's so not the case. Read on for some butt shapes that have been considered perfect throughout the ages, so you can see just how arbitrary "ideals" tend to be.

The Renaissance was all about a full figured woman, since weight was a way of showing off wealth. "The early body style was influenced heavily by the idea that a woman should reflect her husband’s status," says Carlos Cavallo, a dating and relationship coach who has studied evolutionary psychology and sexuality. A rounder frame meant you had a life of leisure, so women were all about celebrating their curves.

Victorian Era (1800s): All About That Hourglass

By the time the 1800s rolled around, women were striving for an hourglass figure — meaning a smaller waist and larger hips. This was all thanks to the industrial age and the advent of the corset. "In the 1800s ... women’s figures began to be extensively modified with corsets ... which created an artificially small waist and often altered women’s skeletal structure and their organs," says McNaughton. While that may sound horrifying, it goes to show the great lengths some people go to in order to fulfill cultural expectations.

The 20s were, in many ways, a breath of fresh air following the laced up and constricted Victorian era. This was the age of the flapper, as well as a more athletic build. As McNaughton tells me, this change happened in response to the new political and social freedoms won by women, such as the right to vote. The look also had a lot to do with women entering in the workplace.

Ladies dropped the corset in order to move freely and do their jobs, and because it was a class distinction. "The ideal figure of the 1920s pointed toward a reduction in some of the obvious physical class distinctions in terms of clothing and appearance," she says. It also favored a much thinner (and flatter) butt shape as a result.

During the Golden Age (from the 1930s to the 1950s), glamorous movie stars and singers like Billie Holiday were having a major impact on the ideal shape. "[The] hourglass figure became the classically proportioned look that Marilyn Monroe and others sported," Cavallo says. This is when Hollywood perpetuated the whole 36-24-36 proportion as the "ideal" shape for ladies, which included a rounder fuller butt.

During the 1960s, the voluptuous look fell by the wayside in favor of thinner supermodels, like Twiggy. No one really cared about butts or shapeliness, but instead focused on long lean lines. "The emphasis went to the legs, which established the long lines and thin frame that became more and more predominant," Cavallo says.

The 70s brought on another cultural shift, again in response to feminist progress in society. "We ... saw a resurgence of an androgynous (thin and flat) ideal body type," McNaughton says. "The narrow-hipped body ideal of the 1970s emphasized tanned fitness. Although it was a more ‘natural’ look (without the use of corsets to pull women’s bodies into curved hourglass shapes), being able to sustain the tanned fit ideal meant that women needed to pay close attention to their diet." This brought on the fitness craze of the 80s, where thin and toned butts remained ideal.

Today: All Butts Are Good Butts

While we obviously have a long way to go in terms of accepting all body types, it seems we're much more open to butts of all sizes — tiny butts, big butts, and seemingly every butt in between. But if I had to choose one trend for today, I'd say larger athletic butts are it.

In many ways, that's great news when it comes to health and body acceptance, mostly because it feels the most inclusive. "I'm delighted with how more muscular and athletic female bodies have become celebrated over the last 10 years or so," fitness expert Julie Buckley tells Bustle. "I remember seeing adult women desperately trying to diet down to these tiny sizes and avoiding any exercise ... Whilst things are far from perfect nowadays, I do see women aspiring more towards a strong healthy body."