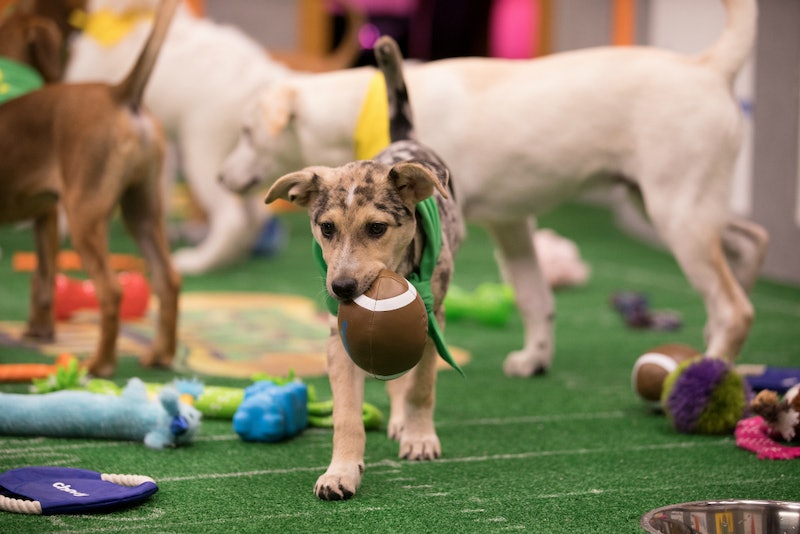 The weekend of Feb. 4 marks a major occasion for two types of people: Those who love football and those who love puppies. Even if you don't have a stake in the Eagles v. Patriots matchup at the Super Bowl LII, the weekend is providing something that everyone can get behind. There is no conflict at the 2018 Puppy Bowl, only great puppies. Those who are hoping to schedule their Super Bowl parties to include the dog-friendly event will be relieved to hear that the two will not overlap, as the Puppy Bowl airs at the earlier time of 3:00 p.m. ET, and ends an hour and a half before the Super Bowl begins at 6:30 p.m. ET.

Animal Planet promises that the Puppy Bowl will feature "two hours of fuzzy faces, sloppy kisses and puppy penalties." This means that fans of puppies and football will be able to get their fill of both on Feb. 4. While the rivalry between Team Ruff and Team Fluff, the two competing Puppy Bowl teams, isn't as dramatic as the showdown between the Philadelphia Eagles and the New England Patriots, there will still be plenty of can't miss moments at the Puppy Bowl.

The Puppy Bowl has a more lax ruleset than the Super Bowl, but that doesn't stop rulebreakers from trying to push past those rules to make for some surprising moments. With 90 dogs in the line-up, plenty of dogs will get their day to go for broke and try something risky on the field. Whether a puppy is trying to sneak a nap during the middle of the game or an MVP in the making follows through on some radical jumps, the Puppy Bowl is bound to have some surprising moments.

There Is A Can't-Miss Kitty Halftime Show

The Super Bowl may have Justin Timberlake's return to the sporting event sporting event for the first time since his controversial 2004 appearance, but the Puppy Bowl has the big football game beat with the cat person demographic — and I'm not talking about the short story! The Puppy Bowl will be treating audiences to a Kitty Halftime Show which Broadwayworld reports will feature cat band Kitt-ENSYNC performing the song "Meow, Meow, Meow." Fans can only hope the track is the lead single from an upcoming album entitled Cat Of The Woods.

A Sloth Will Be There

There's going to be a sloth at the Puppy Bowl. Sloths are cute, charming, and very easy to relate to. For all the thing that make sloths great, however, they are not natural athletes. Fear not sloth enthusiasts, for the sloth will not be crushed in the competition by a Lion King-style puppy stampede (one of those is traumatizing enough). Instead, the sloth will be serving as a referee during the match. While the sloth may not be out on the field, it's doing important work just by being present. Someone tell Kristen Bell, quick.

Now in its 12th year, the Puppy Bowl has already proven to be the perfect antithesis to the tense, nail-biting action of the Super Bowl. It's relaxing, wholesome, adorable, and raises awareness for animal shelters by featuring puppies that are up for adoption. The Puppy Bowl airing at 3:00 p.m. ET makes the program accessible to households who want to have their fill of puppies and football in the same day, and there's no better way to relax before the biggest American sporting event of the year than with nearly a hundred furry friends running around a field without a care in the world. It's appointment television at its finest.