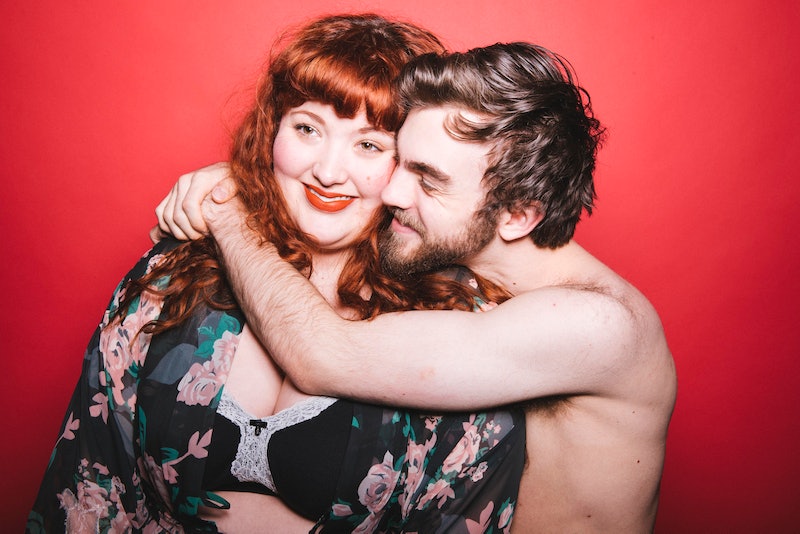 When it comes to expressing and receiving love, we all have different preferences — and not everyone is the super touchy-feely, cuddly type. So what should you do if you and your partner disagree on the ideal amount of physical affection in your relationship? First of all, don't panic: it's totally possible to meet in the middle on this issue, it just takes some careful, thoughtful communication, as well as a willingness to compromise. In a new-ish relationship, overcoming this hurdle can be no biggie, though it might be a little trickier once you're set in your ways of affection as a long-term couple.

"When your relationship is still in its early phase, it's a little easier to adjust your levels of physical affection in order to meet each other's needs, as both parties are more likely to want the relationship to grow and will make that their focus rather than simply gratifying their physical needs," Caleb Backe, health & wellness expert at Maple Holistics, tells Bustle. "However, as the relationship persists, you'll be faced with adjusting your levels of affection to meet that of your partner's more often as you start to establish one another's personal boundaries more clearly."

New couples are still learning each other's preferences in lots of areas, so it can feel more natural to have a convo about how much affection you each want and need from the other. But if you're in a long-term relationship and want to change how you and your partner show affection, that can be more difficult: it requires you to communicate why your current situation isn't working for you, as well as think of ways you can compromise. But if you're unhappy with the level of affection in your relationship, it's essential that you communicate that, because if you don't, it will only brew resentment and cause problems down the line.

"Over time, having different levels of affection for each other can become really taxing on your relationship as the differences tend to cause distance and tension between one another," Backe says. "One partner may want more emotional intimacy, while another may be seeking more physical intimacy for instance. You may start to feel as though your needs are being neglected or that you're sacrificing too much and not getting anything in return and while a little bit of this is an important part of having a healthy relationship — too much on one side or another can have negative consequences on the health of your relationship."

Tips For Talking To Your Partner About Affection

When you're faced with the prospect of opening a conversation about a subject as ~touchy~ as physical affection, it can be daunting. One important thing to remember? As long as you focus on the issue from an emotional standpoint first — aka communicating how you feel, not throwing out accusations or blame — it's a lot easier to dive into the topic without creating friction.

"You should focus on verbal forms of encouragement and try to reassure your partner that you still love them, you're just trying to make some changes or come to a more mutually beneficial compromise," Backe says. "It's imperative that mutual benefits are emphasized as this will enable a much smoother conversation and exchange of ideas rather than using abstract terms or trying to hint at things."

Even if you know (or suspect) that you're the only one who's unhappy with the amount of affection in your relationship, it's still important to approach the issue as a team. If your relationship is healthy, your partner will be open to hearing your side — and will understand that finding a compromise will be beneficial for both of you, and for the overall health of the relationship.

"Encourage your partner when they state their own wants or needs and give support when they have shown that they understand your point of view," Backe says. "This doesn't mean that you can't express your point of view when you don't agree with something, but focus on trying to suggest positive alternatives rather than simply denying your partner's opinions or ideas and if you feel that this is happening to you — then be clear about pointing that out."

How To Reach A Fair Compromise About Affection

Every couple is different, so of course there isn't just one example of a "fair" compromise when it comes to affection levels. Maybe you want to have more sex (or less sex), cut back on PDA, or simply spend more time cuddling: either way, the key is to first figure out what kinds of physical affection you do and don't want, and how often.

"If one partner feels that the other puts too much emphasis on physical affection (i.e. they only want sex) they can say that they feel distant and would like to spend more time doing activities that help to build emotional intimacy like enjoying comfortable silences, watching funny movies, going on hikes or generally trying non-sexual activities that you don't usually do together in order to share a new experience," Backe says. "If the opposite is true and you feel that you want to achieve a greater level of physical intimacy in your relationship, then the same is true about being open and direct about the point that you're trying to make."

It might sound cliche, but as long as you communicate what you want from your partner in terms of physical affection — and do so in a constructive, delicate, we're-in-this-together way — there's no reason you and your partner can't come to an agreement on some new boundaries for affection in your relationship.

"Your partner will feel a lot more willing to be open to new ideas or suggestions or hear your side of the story when they feel as though you're putting things aside to make them your priority," Backe says. "When you feel like you're loved, you're a lot more willing to make compromises (within reason) than if you're simply being told to do something simply because it would suit someone else's agenda. Relationships are all about finding an equilibrium and that's imperative when discussing things of this nature."

It can be scary to approach your partner with an issue when you feel like something needs to change in your relationship, but if you're both loving and respectful partners, it doesn't have to be a big deal if you need a little more (or a little less) affection in your life. And if you expressing your needs is met with disdain, indifference, or even cruelty, then you'll know that your partner simply isn't the right person for you — and you can focus your energy on finding someone who's on the same page as you about affection... or is at least willing to compromise with you on it.