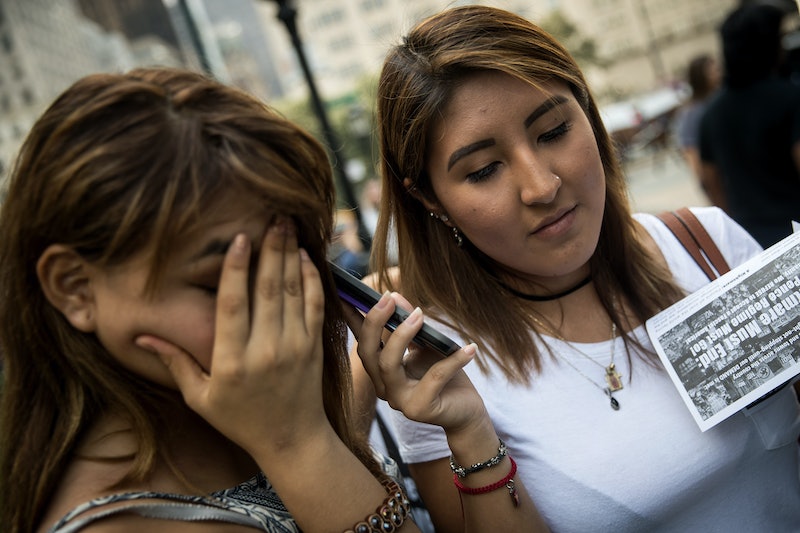 In high school, Alicia Mendoza dreamed of attending Northwestern University. Her guidance counselor said that she would likely be accepted, but Mendoza knew her dream would likely never come true. In 2010, she was not eligible for financial aid, and there were very few scholarships available for undocumented students like her. She knew she'd never be able to afford the tuition.

Despite these challenges, Mendoza managed to attend community college while working at an exploitative job cleaning bathrooms for little pay in order to afford the books, rent, and food she needed to get by. “I couldn’t do anything. I couldn’t drive. It was so hopeless,” she tells Bustle.

Deferred Action Against Childhood Arrivals — an Obama-era program also known as DACA — changed that. Enacted in 2012, the program protects about 800,000 undocumented immigrants from deportation if they were brought to the United States illegally by their parents when they were younger than 16. DACA allows this group to live without the fear of deportation, get legal jobs, and attend college. Thanks to the program, after her time at community college, Mendoza pursued an MBA at Northeastern Illinois University. “It opens up educational opportunities, and it opens up employment opportunities that you can’t access legally without a work permit.”

Last week, Donald Trump announced the end of DACA by March 2018. No new DACA applications will be accepted, and renewal requests from DACA recipients whose benefits are set to expire by March 5, 2018 must be received by October 5, 2017. On Twitter, Trump asked Congress to legalize DACA, even though, as the New York Times reports, his administration had just decided not to ask congress to take action.

DACA’s repeal and the resulting uncertainty has been worrisome for students like Mendoza as well as university administrators. Several universities have condemned the act and offered support for these students, including Columbia, Harvard, and the University of California. But without the legal benefits that DACA provides — namely, a work permit — students and administrators say that attending school will be significantly more challenging for undocumented students.

The real concern is that without DACA, students won’t have work permits.

While undocumented students, including those with DACA, cannot receive federal student aid, The College Board explains that they can receive scholarships or, in some cases, state aid. And Lynn Pasquerella, the President of the Association of American Colleges and Universities, tells Bustle that some private universities also provide their own aid to undocumented students.

According to Pasquerella, these resources will likely not go away because “public and private colleges and universities will be working to enhance state and private financial support to close the gap for DACA students that will result from the recent decision to suspend the program.” But she says the real concern is that without DACA, students won’t have work permits. Even with a generous financial aid package where a student pays in-state tuition, without the ability to work, “how will students make up for the hidden costs, of buying books, of the room and board?” she asks.

Daniel López, the Vice President for Student Affairs at Northeastern Illinois University, tells Bustle that “If [students] lose the ability to work, then they will have difficulties paying for their tuition and fees.” He explains that students “will have to go again under the shadows to work in places where they get paid with cash.” He has also seen students drop out for a semester or two because they cannot afford the cost.

Pasquerella says that college presidents are looking for funding to cover these new burdens placed on DACA students. But Elsa Núñez, President of Eastern Connecticut State University, tells Bustle that “once [students] don’t have a work permit, we can’t give them any employment. It would be illegal.”

López says similarly that if students do not have a work permit the college cannot hire them. “We obviously can make scholarships available to them, but we know that we don’t have enough private scholarships that students can apply for because we just don’t have the resources."

According to Núñez, losing that income would be devastating because it allows the students to pay for things like books and transportation. “It would be a problem,” she says.

Before receiving DACA she worked 60 hours a week making pizza and wasn’t able to attend school.

Bustle spoke to several undocumented students with DACA in both undergraduate and graduate programs, and all of them agree that their work permits are essential to their education. One student, Karla Robles, is in her third year at Loyola University in Chicago. She renewed her DACA permit in May, but if Congress does not legalize DACA, she will lose her work authorization in two years. She has a full scholarship and has also held a few different jobs. “Working during the school year allows me to be able to pay for my books and food. I definitely need at least a part time job,” she tells Bustle.

Mary Soto, who attends Bronx Community College at the City University of New York, tells Bustle that the most important benefits of DACA was receiving a work permit and being able to pursue her education. Before receiving DACA she worked 60 hours a week making pizza and wasn’t able to attend school. “When I received DACA it changed my life completely because I was able to come to school,” she says.

Yadira Alonzo found out that she was undocumented when she graduated high school in 2014. Now a student at Northeastern Illinois University, she tells Bustle that DACA has allowed her to work on campus. She has a scholarship but she pays for the remainder of her tuition herself since her parents cannot help her financially. “If I wasn’t able to work in school, I don’t know how I would be able to pay for my tuition since I get no other help other than my scholarship.”

Janeth Vazquez tells Bustle that paying tuition can be difficult even with a job. Vazquez, a graduate student at the University of Illinois - Chicago who is pursuing a Masters in Social Work, has a work permit through DACA, which is set to expire in 2019, Since she does not receive any scholarships, she has to pay out-of-pocket for her tuition, using money earned through a job. Her graduate program is only one year, but she’s still uncertain how she will pay for next semester. “It definitely has been a struggle, but I’m keeping my mind positive.”

This struggle won’t end when Vazquez graduates, either. Eventually, she wants to become a social worker, but in 2019 if she doesn’t have DACA and cannot work legally, a lot of uncertainty lies ahead. “As it stands,” she says, I’m not sure what I’m going to be doing.”

“Even though we knew DACA wasn’t a permanent thing, it was just a relief to live a normal life where we can go to school, apply to scholarships, travel — just know that you’re kind of safe.”

Robles says similarly that DACA’s repeal would impact her ability to pursue goals she has had since childhood. “I want to be a teacher, so I will definitely be needing a work permit in order to work in the schools,” she explains. “I really want to work in the Chicago Public Schools, and if I didn’t have a work permit that just means that I wouldn’t be able to fulfill my goal of being an educator here in Chicago and working with different communities.”

For Guadalupe Muller, a student at Queens College, CUNY, DACA has provided a sense safety. “Even though we knew DACA wasn’t a permanent thing, it was just a relief to live a normal life where we can go to school, apply to scholarships, travel — just know that you’re kind of safe.” she tells Bustle. “Now the question is: Are we willing to risk working off-the-books, are we willing to work in these unsafe environments that we thought we were safe from?” she asks. “With DACA we felt in a way like we were equal again.” Muller was in the process of renewing her DACA when the Trump administration repealed the program. She is uncertain of its fate and is currently working with an attorney to figure that out.

Many universities provide counseling to help their undocumented population cope with these issues, and some schools have attempted to establish safe campuses for students fearing deportation.

For its part, the Trump Administration has said in a statement that DACA recipients will not be enforcement priorities unless they are criminals. The United States Citizenship and Immigration Services, which is part of the Department of Homeland Security, declined Bustle’s request for an interview or statement.

Pasquerella explains that on-campus deportations are not likely, and that university presidents across the country have vowed to protect students within the bounds of the law. Moreover, she says that while presidents are obligated to comply with federal law, they do not have to turn over personal records.

More like this
To The Beauty Products I'll Never Use
By Alix Strauss
Which Cast Member of 'Westworld' Season 4 Has the Highest Net Worth?
By Meg Walters
What Is Megan Thee Stallion’s Net Worth? The Traumazine Hitmaker Isn’t Worried About A Budget
By Hugh McIntyre
Gemma Collins' Net Worth Is Only Going Up
By Catharina Cheung
Get Even More From Bustle — Sign Up For The Newsletter