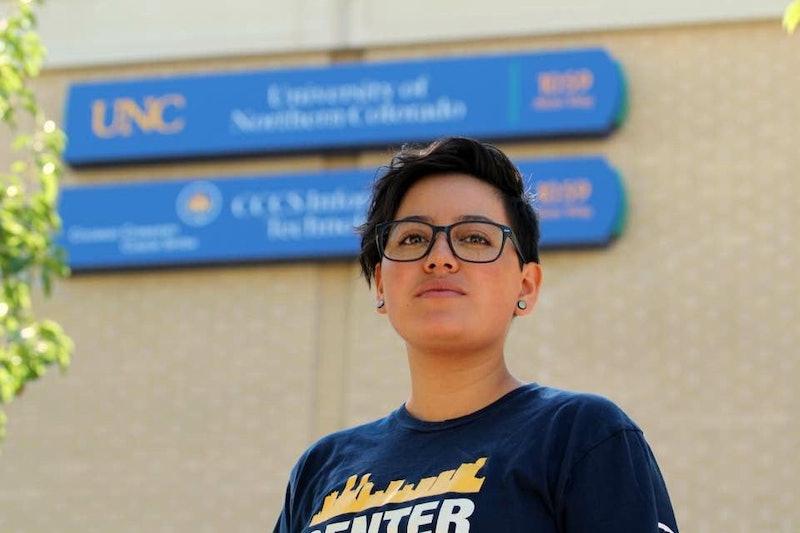 Two weeks ago, I took my daughter to her first day of school, and started my fall semester at the University of Northern Colorado. It was an emotional first day; I was feeling both proud and sad that my baby was now a fifth grader. But these feeling were further complicated by the knot that had formed in my stomach over our uncertain future. Most of my classmates know what to expect. They know that after graduation they will be able to get a job in their chosen career field. I don't have that privilege. I was born and grew up in a small village in Zacatecas, Mexico where there was a lot of violence and few educational opportunities. As a result, when I was 15 I left Mexico to live with my aunt in Aurora, Colorado with hopes for a better future. Today, I am a DACA recipient. UPDATE: Jeff Sessions announced during a press conference Tuesday morning that the White House plans to "rescind" DACA.

On Tuesday, the White House will announce its decision on whether to eliminate the DACA program after officials from nine different states threatened to sue if the President didn’t repeal the program by September 5. The end of this program means 800,000 people who gave their information over to the government, passed a background check, paid a fee, and met all other requirements will lose their authorization to work, attend school, and to be protected from deportation. I am one of those 800,000.

Many people do not even know what Deferred Action for Children Arrivals (DACA) is. DACA provides temporary, two-year permits to immigrants who arrived in the United States before their sixteenth birthday. DACA also protects recipients from deportation as long as they remain lawful, are working or attending school or have joined the military. DACA recipients pay taxes; we contribute to our communities. But DACA is not perfect. It offers no pathway to citizenship or permanent protections.

As a child, I came to Colorado speaking no English. At age 17, I gave birth to my beautiful baby girl, Michelle. With no immediate family close by to help me through my many challenges, I had to juggle being a new mother, a student, and an employee all before my 18th birthday. I attended the New American School in the evenings for three years and graduated with honors, earning a $10,000 scholarship from the Jared Polis Foundation through The New America School. This was my first major accomplishment, and it only served to affirm that my goals were attainable through hard work.

"Congress has the ability to provide my daughter and I, and over three quarters of a million DREAMers just like me with a permanent legislative solution."

I have been in love with art and education since I was six years old and my goal was to one day be both a working artist and an art teacher. More recently I have decided to become an elementary school teacher after working in a school and seeing where I could make a difference. Attaining this goal has taken me longer than other students, because I must work, study, and care for my 10-year-old daughter, but I am nearing the finish line entering my senior year at the University of Northern Colorado Center for Urban education.

In the last few days, people from all walks of life have been speaking up about the devastating consequences of what it would mean to eliminate DACA. Thousands of faith leaders, teachers, and elected officials — Republicans and Democrats — are standing up to say we need President Trump to protect DACA and Congress to pass a legislative solution. Just last week, over 350 business leaders from around the country including Warren Buffet, and the leaders of Facebook, Starbucks, General Motors, Marriott, and Microsoft released an open letter to the President and Congress to stand with Dreamers.

"I am a mother who wants to set a good example for her daughter and show her that dreams can come true."

As the certainty of my future lies in wait, Congress has the ability to provide my daughter and I, and over three quarters of a million DREAMers just like me with a permanent legislative solution. But we also have a president who is threatening to take everything away from us.

I have found a home in the United States and I have spent so much of my life living in this country learning what it truly means to be an American. I am a hard-working taxpayer, an active member of my community, and a mother who wants to set a good example for her daughter and show her that dreams can come true. I am a lifelong learner and I plan to continue growing in my career, attending grad school and getting as far as I can. It hurts me to know that in the place I call home I am not welcome, but I am resilient, determined, and strong. I am a dreamer! And that is what it means to be an American.

More like this
Romance Authors Are Mobilizing For Reproductive Rights
By Natalia Perez-Gonzalez
These 2 Women Could Be America’s First Lesbian Governors
By Tess Garcia
Looks Like She Made It
By Lindsay Zoladz, Beau Grealy and Tiffany Reid
Danessa Myricks Does It All
By Parizaad Khan Sethi
Get Even More From Bustle — Sign Up For The Newsletter