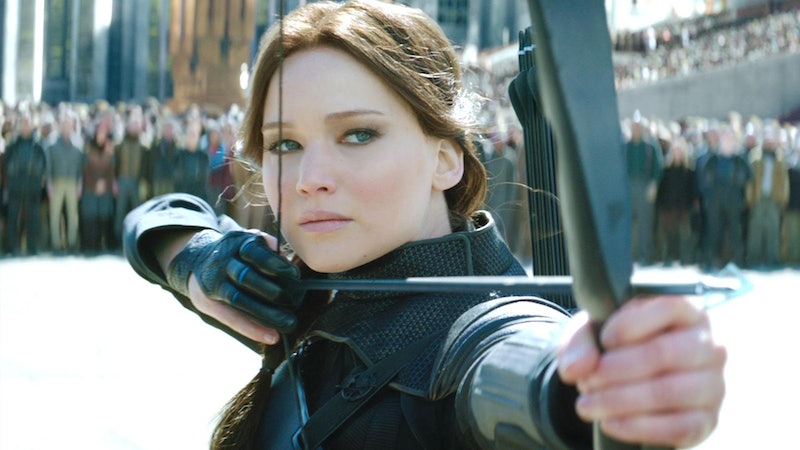 Perhaps fans have haven't seen the last of Katniss Everdeen after all. According to Variety, Lionsgate executives hope to reboot The Hunger Games franchise in one way or another. But what would a Hunger Games sequel be about? Well, during a recently meeting, Lionsgate CEO Jon Feltheimer reportedly made it clear the studio was open to finding new ways of telling variations on the highly profitable movies. Both The Hunger Games series and the Twilight franchise were two huge money-making ventures. Plus, the movies already have built-in major fanbases who would likely devour any chance to jump back into those worlds.

Of course, since both stories are based on popular existing novels, they'd probably have to get the blessing from the book's authors first. But let's assume for a second that Suzanne Collins, The Hunger Games author, signs off on more movies. They couldn't follow any existing novel storylines, so the screenwriters would have to get pretty creative in terms of revisiting without simply rebooting.

And, since Katniss Everdeen's storyline was seemingly wrapped up and the actor who played her happens to be one of the most in-demand and, according to Forbes, one of the highest-paid actors on earth, it may not be feasible to follow her journey again.

But if the stars align and Lionsgate is able to successfully revisit elements of The Hunger Games, there's a wealth of possibilities at hand. Here are just a few ways that the studio might decide to go about rebooting (at least elements of) the franchise.

They could go the prequel route and create the following ideas.

The Hunger Games: The Making of Katniss Everdeen

Let's be real. Despite the fact that Jennifer Lawrence may keep a busy schedule, if Lionsgate can snag the actor for some sort of "before she was famous" style prequel of her story, plenty of people would surely show up to see it.

The Other Hunger Games

If you recall, we were introduced to Katniss and Peeta during the 74th annual Hunger Games. That leaves 73 unexplored Hunger Games stories, including some more famous ones like the 50th which the already known and beloved character Haymitch Abernathy won. And who wouldn't want to see how that went down?

Instead of just focusing on previous Hunger Games, which could be interesting in itself, show the events that led up to the very first one. While it's fascinating to be plopped into an already existing world, it's just as entertaining to find out exactly what happened in that world to make it the way it is. Besides, there's a lot of questions around so-called President Snow's ascent to power. So it only makes sense to revisit that world and learn more about it.

Take a page from the Star Wars playbook and create a completely standalone story about new heroes we've never heard of, but had some sort of impact on the more famous events we already know about. Add a cameo from a character in the original series and you've got a formula for major box-office success.

If you want to time jump into the future for a sequel, perhaps something can happen to the peace that Katniss and Peeta helped create. Their world is rocked but they aren't able to help save it. So it's up to their children to lead the charge. Or, you know, something like that.

Panem Is Not Alone

Based on a Reddit fan theory, there's a chance Panem is not the last nation left on earth. If that's the case, the door becomes open to all sorts of awesome possibilities

Part of the attraction of both these books and movies is the fact that the characters are so rich diverse. And, at least onscreen, each one of them was brought to life in really compelling ways. So following the stories of any of the supporting characters could be a great way to reenter this world without reiterating the same thing over and over again.

People love to see two fantastical worlds mashed together. And, at least according to this Reddit theory, it's possible that Cloud Atlas (Nea So Copros) and The Hunger Games (Panem) could both exist in the same dystopian future. If you could somehow confirm that's the case (or just make it so by negotiating with all the creative parties involved), there's a never-ending supply of potentially engaging storylines.

Instead of revisiting worlds that have already come to life, why not ask the authors to create new ones? After all, these characters and stories came from their incredible imaginations. Though they're totally engrossing, it's entirely possible that new yet-undiscovered fantasy worlds exist in their minds. Sure, this option will take a little longer since the books need to be written and published before the screenplays can even go into production. But, based on what they've produced in the past, a new book from Collins (or even Meyer) would be totally worth the wait.

Of course, the story in The Hunger Games is perfect as it is. But, if Lionsgate and Collins wanted to partner up on more stories like it — or about Panem and that awesome already-existing world we've all come to know and love — it seems like they've got plenty of great material to work with.