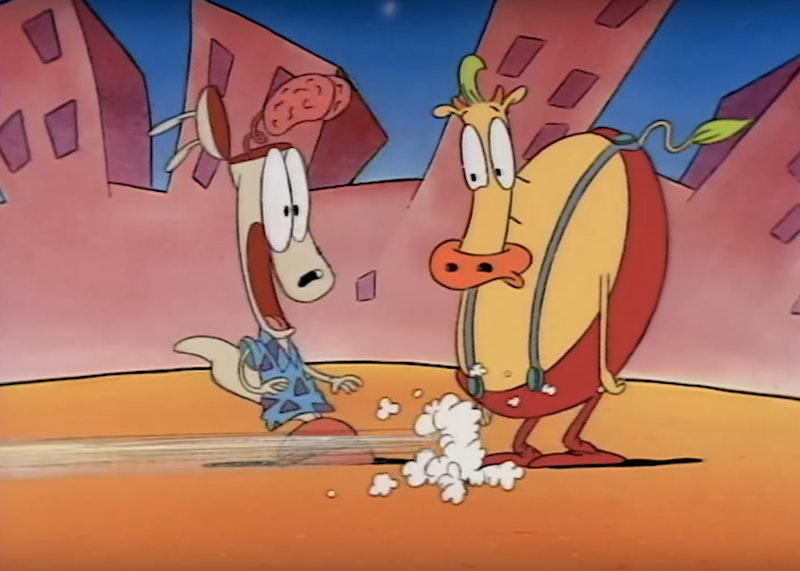 These days, it may seem like everything old is new again on Nickelodeon, but the network is doing way more than indulging in '90s nostalgia. The channel features plenty of new shows that modern kids love — and they are way different than Rugrats. What you watched on Nickelodeon versus what kids watch now will definitely throw you for a loop. For instance, they're not camped out in front of Rocko's Modern Life reruns, even though the channel has a new Rocko special in the works.

Laugh track-driven comedies, reality shows, and SpongeBob SquarePants reign supreme. The Nickelodeon of today doesn't have SNICK, and believe it or not, Nick-at-Nite now shows Friends. Yes, that's right, Friends. When it comes to Nicktoons, as they were affectionately called in the '90s, there are precious few to speak of. The channel has almost entirely devoted its lineup to live-action fare, minus some shows aimed at the pre-school set.

Luckily, one thing that has endured is slime. The gooey green stuff isn't dropped on celebs and kids as much as it once was, but it's still a staple of the Nickelodeon Kid's Choice Awards. So, hold onto those feelings of slime nostalgia, because nearly everything else you loved about the channel has been turned upside down. There's a new generation with their own TV preferences in charge now.

Tommy, Chuckie, Phil, Lil, and Angelica dominated the Nickelodeon airwaves for nine seasons full of life lessons, baby antics, and clever adult humor. The show is a surprisingly accurate depiction of what life in the '90s was like for kids and adults. Through the babies' eyes, the show explored playground dynamics, the joys of fad toys like Reptar, and the rapid pace at which technology was advancing. Meanwhile, the adults challenged gender dynamics, dealt with the anxiety of parenting, and presented an often hilarious look at being part of a grown-up friend group.

Like Rugrats, The Loud House is set in a suburban neighborhood, but it's not a throwback. This animated series made history when it featured the first same-sex couple in a Nicktoon. The series follows the antics of a large family of 11 kids, each with their own defining features. From a goth culture and pony loving 8-year-old to a social media obsessed 17-year-old, the family has a wonderful mix of big personalities. For today's kids, this show seems to provide a relatable and honest look at navigating the complexities of family life — with a healthy side of social consciousness.

2. Then: Clarissa Explains It All

If you needed life advice as a youngster, Clarissa Darling was likely your go-to. Whether she was engaging in a battle for the ages with her little brother Ferguson or trying out an alter ego, Clarissa tackled growing up with energy and a kick-butt '90s wardrobe. Best of all, her fourth-wall breaking monologues are full of wisdom and just the right amount of wit.

This show about quadruplets struggling to get along and define their own identities fills the Clarissa void nicely. In fact, Dawn owes a lot to her predecessor. She may not be able to explain it all, but as the only girl in a house full of boys, she's always finding new ways to stand out. She's not quite as confident as Clarissa, but there's no doubt she can teach kids a thing or two about growing up.

3. Then: Legends Of The Hidden Temple

Few things were more exciting when you were growing up than hearing the voice of Olmec. This game show married historical trivia with the coolest obstacle course this side of American Ninja Warrior. By combining tests of knowledge with the near impossible task of assembling the Shrine of the Silver Monkey, Legends of the Hidden Temple made game show magic.

Nickelodeon only has one game show on air these days, but it's a good one. Paradise Run is set in Hawaii, and challenges its kid contestants to complete in physical challenges and a scavenger hunt. On the surface, it's similar to Legends of the Hidden Temple, but the show's technologically savvy contestants make all the difference. Each team is tasked with snapping pics with their tablets — meanwhile, the tablets that Legend had were made out of Styrofoam.

Before you were old enough to watch Saturday Night Live, you probably were watching All That. The sketch series launched the careers of Kenan Thompson and Amanda Bynes. It also made Good Burger happen, for which the entire generation is eternally grateful.

There's nothing truly comparable to All That airing on Nick these days. Instead, kids gets their laughs from "epic fail" videos featuring America's Funniest Home Video-style sports mishaps. Crashletes is very much a product of YouTube culture, and it traffics in the universal hilarity of seeing someone wipe out on a bicycle and not get hurt.

5. Then: The Secret World Of Alex Mack

Alex Mack was an average kid... until a chemical spill gave her mysterious powers. The show played into the fears about the potential repercussions of an environmental disaster that seemed so prevalent during the '90s, but it also presented a young girl with superpowers who wasn't necessarily a hero. Seeing Alex grow into her abilities, grapple with typical middle school problems, and avoid being turned into a lab rat made for an exciting sci-fi show that remained remarkably grounded.

Like Alex, Henry is a middle-schooler keeping a big secret from his friends, but the similarities end there. Henry Danger features the same comedic tone that seems to define most of Nickelodeon's current live-action lineup, but it's also a sci-fi/fantasy show. As a sidekick with superhero aspirations, Henry is working toward a goal, even as he ends up going on his share of silly missions.

Premiering in 1999, SpongeBob SquarePants arrived at the tail end of the Nicktoons boom. The show mixed jokes about the mundanity of modern life with an absurd sense of humor that made it a favorite for adults and kids alike.

That's right, 11 seasons and 217 episodes later, SpongeBob is still going strong. The lovable sponge who lives in a pineapple under the sea's appeal continues to span generations. The kids who watched the show from the start are adults now, and some of them could feasibly now share the show with their own kids. SpongeBob's enduring popularity is proof that even when it seems like everything around you has changed, some things do stay the same.

Even though the Nickelodeon you knew and watched obsessively looks different, it's still one of TV's most reliable sources of entertainment for kids. It's just that these kids are way more into sitcoms than they are cartoons.