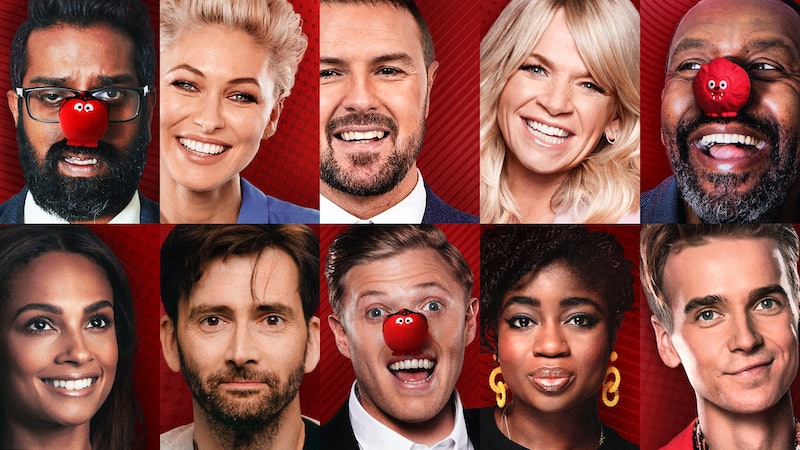 Attention comedy fans with a conscience! Comic Relief is back, fully prepped to provide your dose of celebrity silliness, and all in aid of charity. The Red Nose Day festivities have provided some of the most iconic moments in British comedy programming history, having gained support from the biggest names in the bizz. I mean, what else would you expect from Comic Relief co-founder and king of the rom-com Richard Curtis? The show has become such a huge event, and it seems to get bigger every year, so what's the TV schedule for Comic Relief 2019? And, more importantly, what take away are you going to get to enjoy with it? A curry? Chinese? Pizza? OK OK, so I can't answer the second question, but, before I get onto the first, let me remind you why celebs are getting funny for money on Friday night.

Comic Relief was founded back in 1985, and the first Red Nose Day event was in 1988. Since then, comedy legends like Lenny Henry, Rowan Atkinson, and Eddie Izzard have thrown their weight behind the campaign. Over the years, Comic Relief has produced some truly iconic sketches, and the organisers have managed to raise a billion pounds to date.

This year is going to be lit AF, with the broadcast taking place between 7 p.m. and 12.30 a.m. Read on to find out all the juicy deats of the night below.

Y'all better skid right over to the mothership of UK TV, BBC One, and get to enjoying a lot of sketches come Friday March 15 at 7 p.m. Hosts including Emma Willis and Lenny Henry will guide you into what will be a pretty wild night of entertainment.

Arguably the biggest hitters of the night are always in this prime-time slot, and 2019 Comic Relief is not messing around. Jennifer Saunders’ Mamma Mia: Here We Go Yet Again will be on during this slot, which will act as the sequel to Saunder's Mamma Mia sketch she did back in 2009. The OG spoof was too funny, so if you haven't seen it, make sure and recap beforehand.

One Red Nose Day And A Funeral will also appear in this section, and is certainly one to watch out for. This sketch will act as a spoof sequel to Richard Curtis’ legendary film Four Weddings And A Funeral. Hugh Grant, Andie MacDowell, Kristin Scott Thomas, John Hannah, Rowan Atkinson, and James Fleet have all signed up for the project, among others. So, yeah, it's going to be epic.

On top of that, Richard Madden will be doing a complete LOL version of his hit show Bodyguard and cricket legend Freddie Flintoff will be going for a spin on the Top Gear challenge track with football hero Robbie Savage. There will also be a performance from the Only Fools And Horses: The Musical cast, who are currently nailing it on the West End.

Moseying on over to BBC Two for a while so the country can get its daily Brexit update (eye roll) via the 10 o'clock news, the entertainment just does not stop. This time round, they are going for game show vibes.

University Challenge, arguably one of the best game shows of all time, will be doing its bit for Red Nose Day and letting a bunch of celebs take over. Hosted by David Baddiel, who may or may not be able to be as savage as Jeremy Paxman, a whole host of talent will show their general knowledge (or lack there-of) for this portion of the evening.

Comedians Luisa Omielan, Jason Manford, and Vick Hope will be joined by actors Martin Freeman and Emily Atack alongside other UK celebs to bring the house down. You might also learn some, like, actually useful things. Dare to dream.

OK, now that the country is updated with how crap a lot of things are, let's get back to the entertainment. Traditionally the more racy part of the show, the late-night slow will be hosted by the likes of Clara Amfo and Joe Sugg. As well as that, some famous AF people will be in the house to take donations over the phone. So who knows? You might call in and end up on the phone to a celeb.

The icon that is his highness Alan Partridge will be hitting his local Norwich in the hope of getting cash donations.

Fans of the Red Nose Day edition of Four Weddings And A Funeral will probs be dead keen to find out what it was like on set, so the broadcast team over at Comic Relief kindly made a BTS tape, which will be shared with fans during the late-night slot.

Next up, Magic Mike Live get busy. You heard me, giration a go-go and more abs than you could shake a stick at.

Fans of abs are probably also fans of Daniel Craig, so they should stay up to try and win a breakfast with Daniel Craig aka James Bond aka the man behind that walking-out-the-sea scene.

Whether you watch it from start to finish or only the bits that tickle your fancy, make sure and remember what the show is really in aid of, and dig deep with what you can.