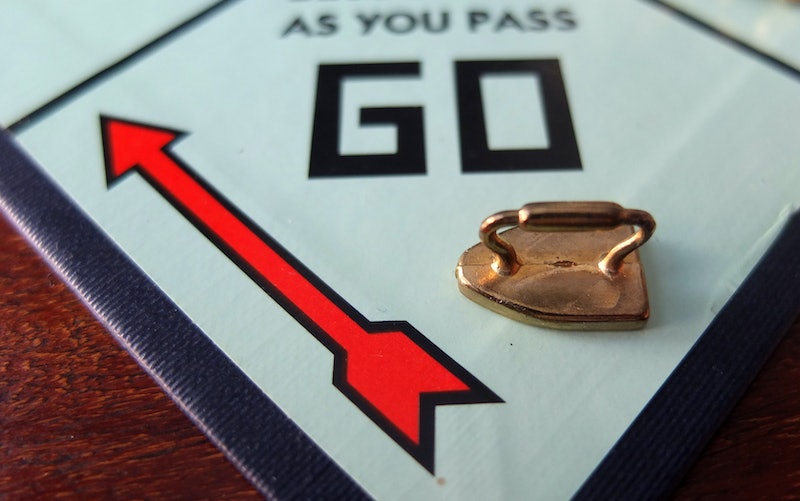 If you grew up playing board games, you already know that one of the most important aspects of a good game of Monopoly is picking your perfect token. Now, we actually have the opportunity to vote on new Monopoly pieces! Of course, you're probably wondering,"Hey, when can I vote on the new Monopoly pieces, anyway?" And as it turns out, I have excellent news for you: You can start voting on new Monopoly pieces literally right now.

Fans can vote by participating in the Monopoly Token Madness Vote. How does this work? The process is pretty simple. By simply visiting VoteMonopoly.com, you can vote for your favorite the 50+ options. Voting began on Jan. 10; what's more, it continues all the way through the rest of the month, finally ending on Jan. 31.

Some of the voting options do include the original eight tokens — the Scottie dog, car, top hat, thimble, boot, wheelbarrow, battleship, and the cat (which, by the way, was previously the iron) — but most of the options are new. What's more, the new options are a fun mix of "classics," like a penguin and a rubber ducky, as well as some very contemporary options, like a handful of emoji-inspired designs. Because what better way to get young generations into board games than by letting them embrace their love of the Face With Tears Of Joy emoji, right?

Interestingly, this is not the first time people have had the opportunity to vote for updates to the Monopoly pieces. Remember that swappig-the-iron-for-the-cat thing I mentioned earlier? That was also the product of a fan vote. But, the idea that we could essentially vote out all of the originals is definitely something. For a lot of us, Monopoly has been a classic, family game we played around the kitchen table after dinner or as we winded down from holidays; it's hard to imagine it with anything other than its classic token set.

There is a certain appeal to keeping things exactly as they are, especially when we consider how much our generation loves and takes comfort in nostalgia. Luckily, if you're in the nostalgia-filled Monopoly boat, you can easily vote to keep the original pieces in tact!

But if you're looking for a change, and perhaps hoping to engage younger generations who might turn to a video game or smartphone instead of a board game, getting an emoji or two into Monopoly might not be the worst idea. After all, times are changing, y'all.

Cast your votes from now through the end of January at the Monopoly Token Madness Vote website. Good luck!