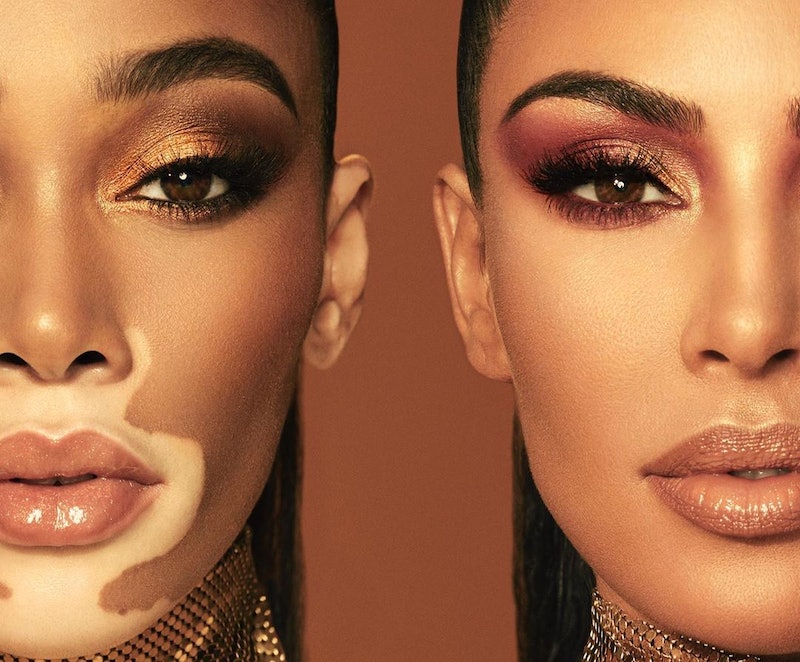 KKW Beauty is hot off its most recent release of the Sooo Fire collection, but that hasn't stopped the brand from giving fans a new product — and a new collab. On Sept. 3, the KKW x Winnie Harlow collection hit Instagram becoming the latest set of products to come from Kardashian West's eponymous makeup brand. It also happens to be only the third collaboration the brand has ever done.

In a post to both Kardashian West's personal account and the brand's page, KKW Beauty announced the KKW x Winnie Harlow collection which will include a 12-pan eyeshadow palette, pressed powder highlighter duo, and three lip glosses. While the glosses and highlight maintain the sheer but glowy and neutral take on beauty that KKW is known for, the new eyeshadow palette marks another color expansion for the brand giving fans a mix of pinks, purples, a cool tone blue, and neutrals. According to the post, the collection is set to launch on Sept. 13.

Kardashian West said via her Instagram, "I’m so excited to announce my new KKW x WINNIE collab!!! [Winnie Harlow] is someone I admire and respect so much. She’s the definition of a true beauty."

Harlow had equally as gushing words for Kardashian. The model wrote on her own page, "Thank you [Kim Kardashian West] for allowing me to be free in my creativity. Thank you for calling me and asking my opinion on everything to do with this collaboration!"

Harlow, who's birth name is Chantelle, appeared on season 21 of the Tyra Banks helmed American's Next Top Model where she finished in sixth place. The model made headlines back in May 2018 when she appeared on Bravo's Watch What Happens Live and stated that the reality show didn't do very much for her career. While some took the comments as shade, Harlow explained in later interviews that her words were never meant to be derogatory toward show-runner Banks or the series itself.

While America's Next Top Model may be why Harlow looks most familiar, her star has only risen post-show. She's appeared in Beyonce's Lemonade visual album, attended the Met Gala, and been an outspoken advocate for body positivity, particularly when it comes to living with vitiligo.

Harlow has the skin condition, but she's made very clear that vitiligo is simply a part of who she is, not something she "suffers" from. In March 2018, Harlow called out a newspaper who used such language to describe the condition writing in an Instagram post, "The only thing I’m suffering from are your headlines and the closed minds of humans who have one beauty standard locked into their minds when there are multiple standards of beauty!"

Fans will have to wait and see if Kardashian West decides to begin teaming up with others or even working with members of her own family. Her sister Kylie Jenner is known for working with her sisters, including Kardashian West, so spreading the love is in the family. Until then, the new KKW Beauty x Winnie collaboration will give you plenty to be excited about.