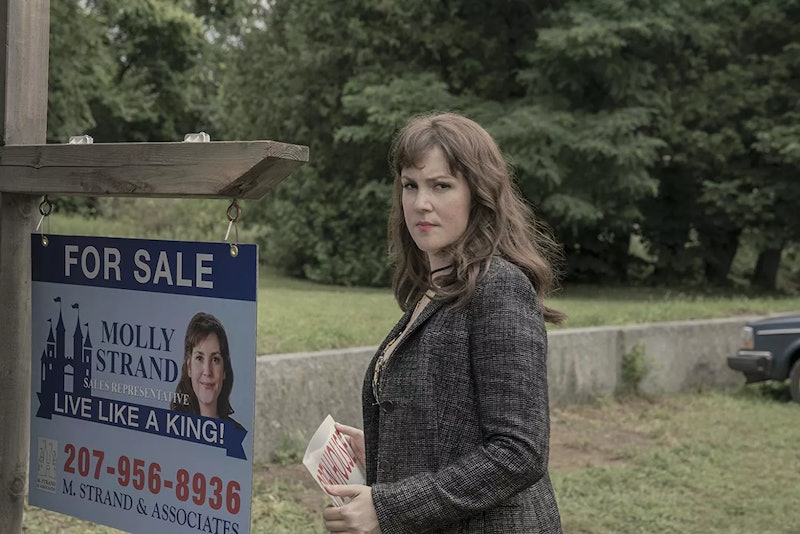 Spoilers through Episode 8 ahead. "Out there, in the woods… that's where you died." With those haunting words, The Kid set up yet another mystery for Hulu's Stephen King-inspired series to solve. But how did Molly die on Castle Rock? And, perhaps more importantly, when did Molly Strand (Melanie Lynskey) die? Given that she seems very much alive and well in the present day, there are a lot of questions about the creepy Kid's premonition of the real estate mogul's doom.

Although theories about the Kid at the start of the season largely revolved around the warden's prisoner being evil — a new form of Pennywise the clown, a manifestation of Randall Flagg, literally the devil himself — it's become clear as the season has progressed that there's a lot more to the taciturn stranger than meets the eye. The Kid is clearly hiding some sort of connection to Henry Deaver or the town of Castle Rock itself (or both), and the secret of his identity will unlock the mystery of the series. But now it appears he also has some sort of connection to Henry's childhood crush and next-door neighbor. What is the nature of that connection, and what happened — or is going to happen — to Molly?

There are three basic possibilities for what's going on here: past, present, and future. The first option takes the Kid's words at face value; spoken in past tense ("That's where you died."), the Kid's warning could mean that Molly died some time ago and has forgotten the traumatic event. If so, that obviously raises more questions. How long ago did she die? Perhaps when she was a young kid, during the timeline of the flashbacks to young Henry's disappearance? If she died in the past, then how was she resurrected? What power exists in Castle Rock to bring a person back to life — and what other deceased characters might return before the season is over?

The second option brings the Kid's warning into the present: Molly wasn't dead… she is dead. Perhaps he did see her die in the woods at some point, but was never resurrected by some holy power; rather, she's been going through life as a ghost, unknowingly, like Bruce Willis in The Sixth Sense. Of course, viewers have seen her interact with plenty of characters — and not just characters with supernatural abilities like the Kid and Henry, but also regular people like her sister and Jackie Torrance. But the idea of Castle Rock being littered with the unsuspecting ghosts of its victims is a compelling one and would make for a fun twist at the end of the season.

The final option is that the Kid's words are actually misleading, and Molly's death will take place in the future. To be honest, this seems like the most probable of the scenarios: that while the Kid may have already seen Molly's death in the past, what he saw was a vision of it that has yet come to pass… and that poor psychic Molly will kick the bucket before the season ends. Given that the Schisma is the effect of a collision between all possible realities, it's conceivable that the Kid got a glimpse of this outcome through the auditory phenomenon. And if so, it's possible that Molly's death is still avoidable, if what the Kid saw was just a possible reality — one that could be circumvented given prior knowledge of its existence.

But is fate avoidable or is it written in stone? That's the question that Molly fans will have to grapple with as the final two episodes air: will Molly Strand make it out of Castle Rock alive, or is she destined to die there like so many before her?