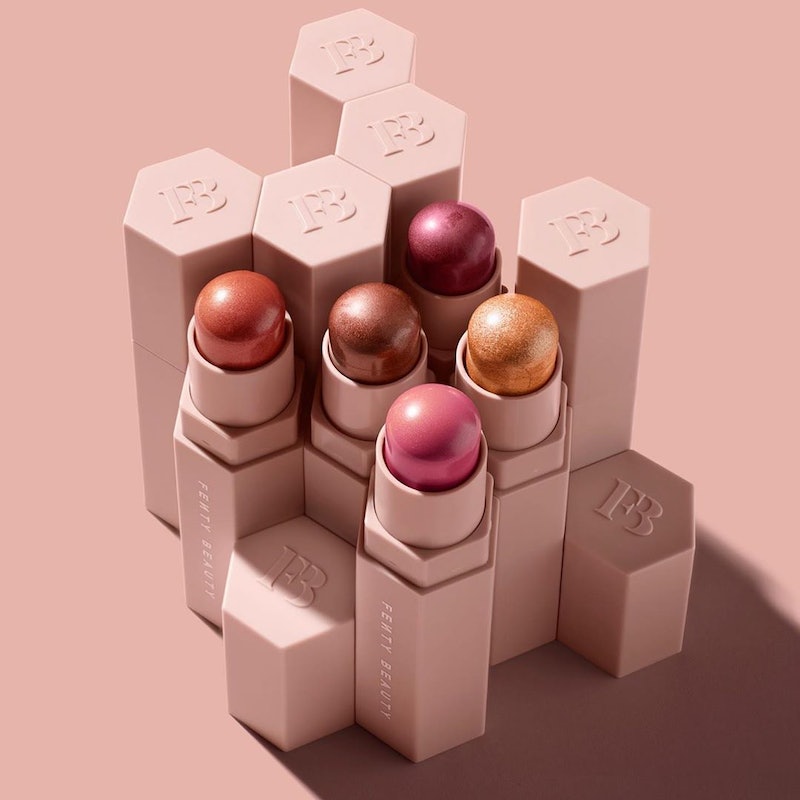 Rihanna's Fenty Beauty has been giving makeup lovers multiple launches of brand new products, and to say its a blessing is an understatement. Now, though, the brand is going back to an OG product. Fenty Beauty's new Match Stix colors are coming, and they'll have you blushing more than Rihanna's Savage X ads.

Almost two years ago, Rihanna launched Fenty Beauty with a plethora of complexion products. The brand's Pro Filt'r Foundation was certainly one of its standout product given its 40 (now 50) shades for all skin tones. Of course, every one remembers the vibrant metallic gold of the Trophy Wife highlighter. Both Fenty's foundation and its highlighters have seen expansions since the brand's launch, but something that hasn't seen a major extension is its colorful, shimmering Match Stix. Now, that's changing.

On Aug. 22, Fenty Beauty announced the launch of five new shimmering Match Stix colors. The brightly-hued, hybrid blush and highlighters are a cream to powder formula and one of the brand's original creations. As for the new shades, fans will be getting access to everything from a golden champagne to a next level fuchsia hue, and just like everything Rihanna does, there's a shade out there for all of her fans.

According to the post, the new shades include Champagne Heist, Pink Lemonade, Beach Bum, Cognac, and Bordeaux Brat. When you view the shades, the names make total sense and describe the new options perfectly. Whether you want a bright flush or some extra shimmer over your bronzer, the cream to powder formula of the new Fenty Match Stix will be perfect for you.

Plus, thanks to Rihanna being the kind goddess that she is, fans of Fenty Beauty don't have long to wait until they can get their hands on the new shades. According to the brand's announcement post on Instagram, the new Match Stix will be available both in-store and online at Sephora and the Fenty Beauty website on Aug. 23. Yes, just 24 hours after the announcement. Praise, Rihanna!

Of course, the Match Stix aren't the only thing that Fenty Beauty has launched lately. As mentioned, the brand always appears to be expanding. Most recently, Fenty's Brow MVP hit the internet. The classic, ultra-fine brow pencil comes in a major 14 shades and features a smudge resistant formula (because no one wants smudgy brows). Like the new Match Stix, Brow MVP is set to launch on Aug. 23.

That's not all, though. At the beginning of August, Fenty Beauty announced a brand new foundation and primer coming fans' way. The new hydrating formulas of both the primer and foundation marked a new approach to complexion for the brand that previous only featured a matte formula. However, like the original Pro Filt'r, the new Pro Filt'r Hydrating Foundation comes in a major 50 shades.

If you want an extra flush or a bit of highlight, the new Fenty Match Stix shades launch Aug. 23 at Sephora and Fenty Beauty. With a formula that the brand has already perfected thanks to its OG status, this is one launch you can bet will be amazing.