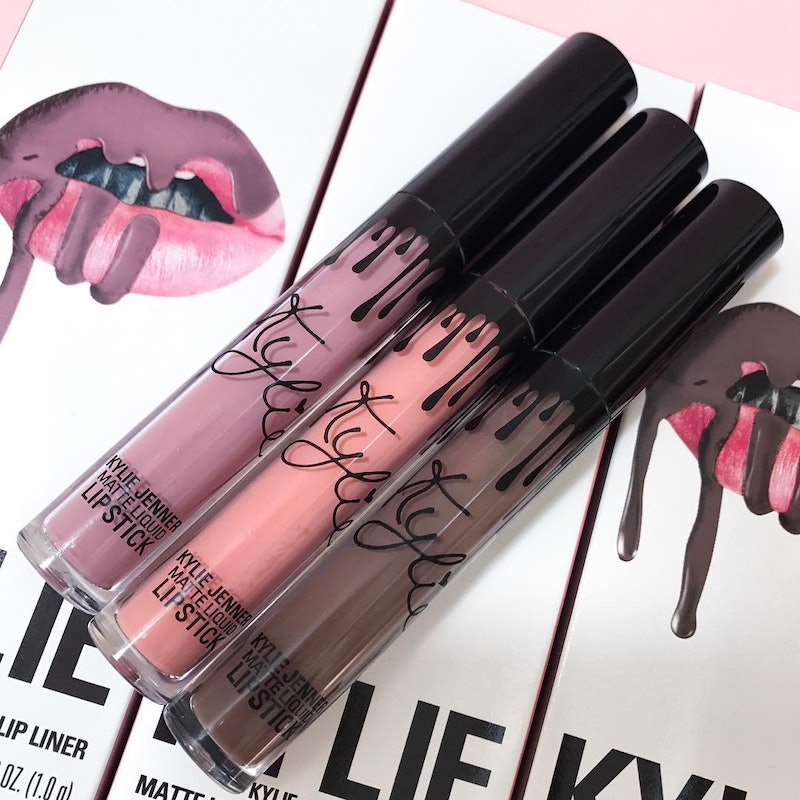 When it comes to Kylie Cosmetics, you never know what you're going to get. Matte, gloss, liner, dark light. The possibilities are endless. Now, Kylie Cosmetics September Back to School lip kits are officially upping the anti after the star teased them on her social media pages earlier this week. With school back in full swing and fall right around the corner, a new Kylie Cosmetics launch is just what everyone needed to get into the fall spirit, right?

When can you snag the latest Kylie Cosmetics matte lippies, though? According to Jenner's Snapchat account, the launch is Friday, Sept. 15 at 6 p.m. ET/3 p.m. PT. The time shouldn't come as a surprise to diehard Kylie Cosmetics fans. The mogul tends to release the vast majority of her collections and individual products in the afternoon, and it's kind of a stroke of genius. While you may be rolling your eyes because why is a release time genius, but just think about how huge Jenner's fanbase is. 3 p.m. PT is a time that works for both her west coast and east coast customers.

No one is going to have to chug a Venti coffee at midnight before spending their entire paycheck over on the Kylie Cosmetics website.

As for what's debuting in the Back to School matte lip kits, it's a much smaller launch than her last. But, come on, fans can't expect a Birthday Collection sized launch every month. A woman has to breath, but Jenner is still bringing her fans new goods. Despite tackling highlighters — aka Kylighters —, blushes, and eyeshadows, Jenner is throwing it back and launching more of her iconic lip kits.

Let's be honest, there will never be enough Kylie Lip Kits to go around.

Plus, with new lip kits comes new opportunities to mix and match. Jenner has previously showcased how she likes to combine her lippies to get a custom shade or look. Whether you want to get an ombre effect or mix and match liquid lipsticks and liners, by launching more kits, Jenner is just giving you more choices.

How could Jenner possibly debut new lippies, though? The creative mind behind Kylie Cosmetics has clearly already created a ton of shades. Well, before people started crying foul that her lippies have all morphed into one giant pink-nude or warm brown, Jenner swatched the Back to School mattes on her Snapchat, proving that not all lippies look alike when placed side by side.

Moon may be a brown tone, but it's undeniably cool. Meanwhile, her latest release, Mink, features a red undertone.

As for Bubble, it initially appeared to be a pink shade, but instead it's actually a lavendar making it a completely different look than anything else Jenner has currently for sale with Kylie Cosmetics. That, however, didn't stop her from showcasing it alongside her other pink hues and the cool-toned purple of Grape Soda.

As for Penelope — presumably named after he adorable niece Penelope Disick — it's the latest shade of pink the brand has crafted. While it does bear a definite similarity to Apricot, the lippies are still different from one another. Plus, hello, it's named after Penelope which is adorable!

If Bubble, Mink, and Penelope all look like your new must-have autumn lip obsession, mark your calendar. Come Friday, Sept. 15, these beauties can be yours. While Jenner hasn't officially revealed the price, every other lip kit retails for $29. It seems unlikely Jenner would mark her prices up for her fall lip kits.

Whether you're heading back to school, back to work, or are just really into fall lip colors, the new Kylie Cosmetics Back to School mattes may just be your new must-haves.