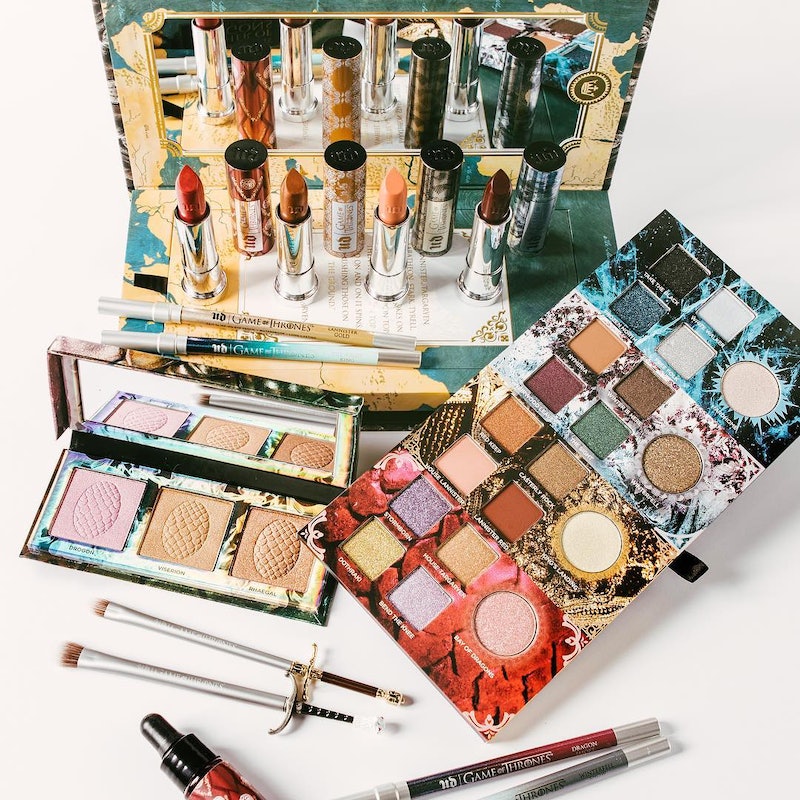 If you've been on the internet lately, you've probably noticed that practically everything is about Game of Thrones right now, and there's good reason for it. The final season of the hit HBO series is about to heir and for beauty lovers, there's a new Urban Decay x Game of Thrones makeup collection coming along with the premiere. If you've always wanted to get the perfect smirk like Cersei or embrace your inner Mother of Dragons, the latest collection will help you do so.

Urban Decay first announced their work with the popular television show back in February, and since then, the hype of the return of the show has only grown. With the series' last red carpet premiere on April 3 and two of the stars wearing the Urban Decay x Game of Thrones collection to the event, the need for the new makeup collaboration may be just as high as the anticipation for the show (okay, maybe not, but it's still exciting for fans of the show and cosmetics).

If you want to be one of the first to snag the collection before it sells out, the launch date is going to be so sentimental. The Urban Decay x Game of Thrones collection will launch on April 14, the same day as the show's premiere.

The makeup collection's launch date makes so much sense given that the collaboration between the show and the cosmetics brand is an official partnership. While there have been brands who have done Game of Thrones inspired items, this launch is different thanks to its official work with the television show.

In fact, the pieces in the Urban Decay x Game of Thrones collection are so on point with the show that some of the series' stars even wore it to their last premiere. Maisie Williams' look for the last red carpet of the show featured all Urban Decay makeup products including staples like the All Nighter Concealer and Foundation as well as the brand's iconic All Nighter Setting Spray. Alongside those items, though, Williams was also rocking the Mother of Dragons Highlighter Palette in shades Rhaegal and Drogon as well as shades from the eyeshadow palette on her eyes.

Nathalie Emmanuel was the other Game of Thrones star to wear the new collection, and while Williams took a more smoky approach to her look, Emmanuel was all about some fiery shades. She does, after all, play Daenerys Targaryen's advisor and confidant Missandei. For her look, she used the same Mother of Dragons Highlighter Palette as Williams but used just the shade Rhaegal. Also like Williams, Emmanuel wore the new eyeshadow palette from the collection as well.

If you want to rock looks like Williams and Emmanuel or want to create something totally different, you can get your hands on the Urban Decay x Game of Thrones collection on April 14, the day of the final season premiere for the show. Hopefully, a little bit of makeup can help soften the blow of the show's end.