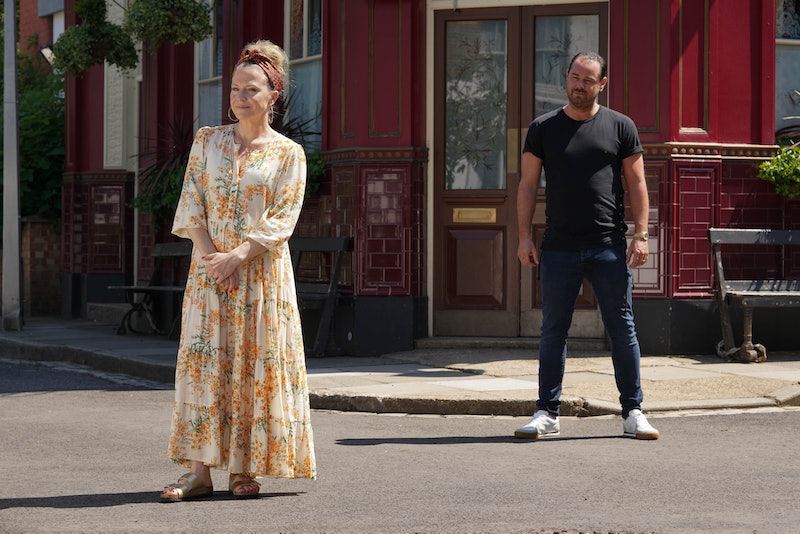 In a plot twist that nobody was expecting, EastEnders has finally run out of episodes. Filming was halted back in March due to coronavirus, which affected the show's airing schedule significantly. Now, for the first time in the beloved British soap's history, the Queen Vic will be temporarily closing its doors for business. But fan’s of the show will still be able to get their fix in the interim thanks to a new spin-off show, EastEnders: Secrets From The Square.

Each week presenter Stacey Dooley will be taking to Albert Square to sit down with members of the cast and relive some classic moments from the show, while we wait for EastEnders (which celebrated its 35 year anniversary at the start of the year) to resume filming later this year.

When & Where Will ‘EastEnders: Secrets From The Square’ Air?

Secret's From The Square, will be airing tonight (June 22) at 8 p.m. on BBC One in the place of the regular Monday EastEnders slot. The new show will take place on the actual EastEnders set, with everyone keeping two metres distance of course. There will be four episodes in Season 1.

Who Will Be Featured On ‘EastEnders: Secrets From The Square’?

The first episode will be all about the current Queen Vic owners Mick (Danny Dyer) and Linda Carter (Kellie Bright). They’ll be sharing their favourite behind-the-scenes stories from the square.

What Happened To ‘Eastenders’ & When Is It Coming Back?

EastEnders, along with many other shows, stopped filming back in March due to COVID-19 outbreak. Luckily, the BBC soap is filmed weeks in advance, the BBC made the decision to go from airing four episodes a week to two, so it could stay on screens for as long as possible.

Speaking about the new spin off, Controller of BBC Entertainment Kate Phillips said: “While going off air was never in their plan, we and the EastEnders team knew straight away that this would be the perfect opportunity to celebrate the show.”

Sadly there's no word yet on exactly when regular EastEnders will return, although insiders are guessing it'll be the second half of August or thereabouts. However, those looking for clues about what's to come may be in luck, as Phillips did say that the Secrets From The Square guests “may just give us some teasers as to what’s to come when they return.”

EastEnders: Secrets From The Square starts 22 June, 8 p.m. on BBC One.