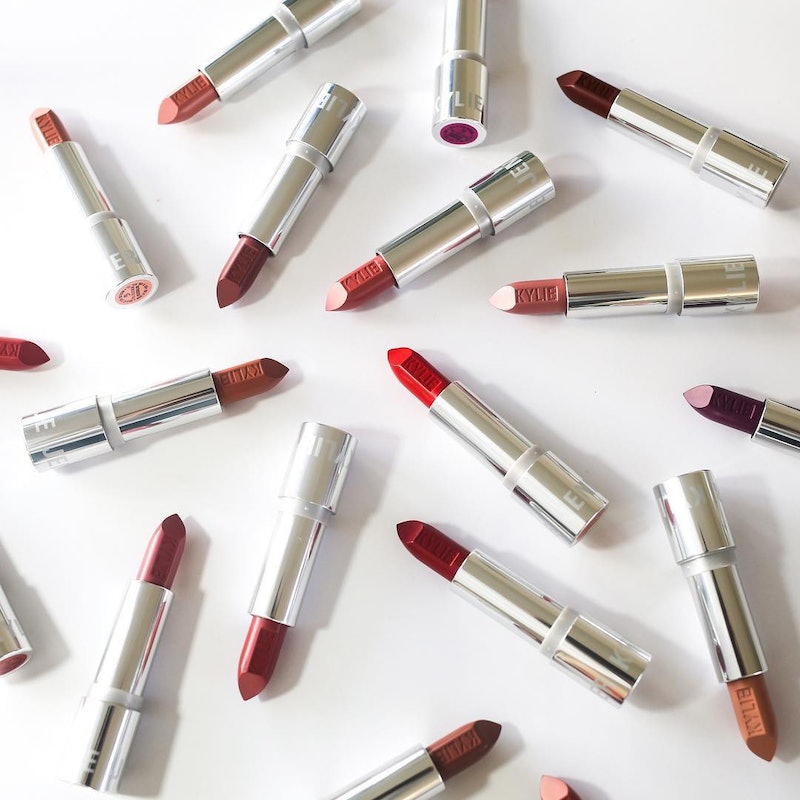 Kylie Cosmetics is no stranger to sold out products. In fact, it sometimes feels like the brand has had more restocks than launches — and the trend appears to be continuing. The Kylie Cosmetics Silver Series Lipsticks sold out in half an hour during their launch on Dec. 13, and it left many fans scrambling to get their hands on the coveted new lippies.

According to comments on the Kylie Cosmetics Instagram page, the bullet lipsticks were gone in only 30 minutes leaving some fans out in the holiday cold. Jenner, however, isn't going to let her fans be disappointed during the holiday season. After all, this is technically a second holiday drop for the brand.

According to Kylie Cosmetics' social media pages, the ultra-popular Silver Series Lipsticks will be restocking next week. As of press time, no official date and time has been announced, but come the week of Dec. 18, you can expect another chance to get your hands on the lipsticks.

What makes them special, though? They're the first of their kind of Kylie Cosmetics. The brand has never launched a bullet form of lipstick, and unlike Jenner's iconic matte liquid lip kits, the new lipsticks have a creme formula.

As for the price, the lippies retail for $17 making them one of the more affordable items on the Kylie Cosmetics website. The traditional lip kits retail for $29, but don't worry about Jenner up-charging for a new product. These bullet lipsticks are the same price as a single matte liquid lipstick.

Upcharging, however, has been a topic of conversation with Silver Series launch. The Kylie Cosmetics brush set caused quite a kerfuffle on the internet before its launch making the complete and ultra-fast sell out of the lipsticks a bit of an under-the-radar occurrence. All attention appeared to be on the brushes.

With a $360 price tag, the Kylie Cosmetics Silver Series Brushes garnered questions of whether or not they were worth the price. Ultimately, that's up to the customer to decide, but the court of public opinion — aka Twitter — was quick to sound off that the brushes were just too expensive.

While the conversation raged on about whether or not Jenner should lower the prices or create a synthetic line, it seems that fans were actually paying attention to the bullet lipsticks. With twenty shades to choose from, it was a great launch, and people wanted in on these beauties.

With a concealer and brush launch both creating buzz, maybe some thought the lipsticks would be overlooked, but that clearly wasn't the case. In a surprise turn of events, they turned out to be the most popular product of the Silver Series launch — if you're measuring by sell-out rate, that is.

Fans were definitely heartbroken over their missed opportunity to snag one of the new products.

Others tried their hardest but just lost track of time when they launched at 3 p.m. PT on Wednesday.

To say it was a stressful time for Jenner's fans would be an understatement.

As usual, though, the Kylie Cosmetics creator was quick to reassure her fans. She took to her Twitter account following the quick sell-out to apologize to those who weren't able to grab the lipsticks during the initial launch and congratulate those who did.

In the tweet, of course, Jenner announced the the Silver Series Lipsticks would be restocking next week, so if you weren't one of the fans she congratulated, don't worry. There will still be opportunities for you to grab these gorgeous, shiny silver lipsticks yet again.