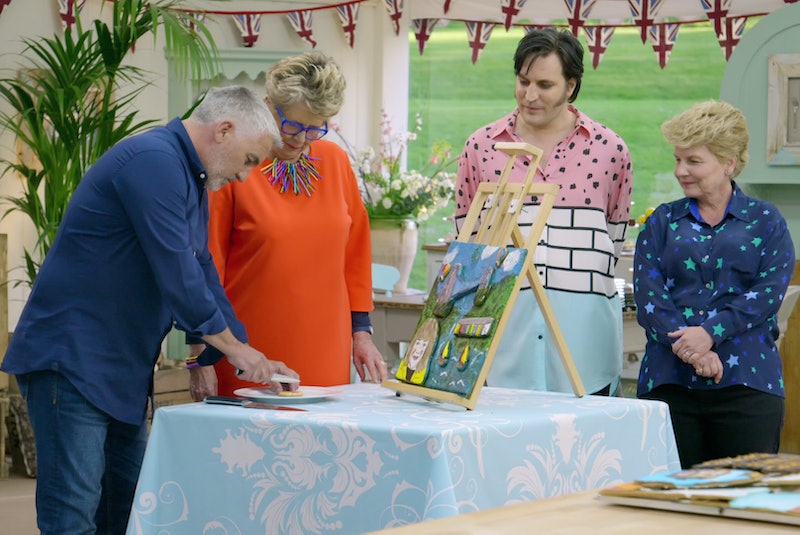 On your marks, get set ... head to Netflix! American fans of Britain's favorite baking show will finally get to experience the ups and downs of the famous white tent in as close to real time as possible, when the newest season of The Great British Baking Show arrives on Netflix on Nov. 9.

The most recent season of the beloved cooking show — which just wrapped up on Tuesday, Oct. 30 in the U.K. as Season 9 — is the first to hit the streaming service immediately after airing overseas, thanks to the recent deal that gave Netflix first rights to air the program internationally. Previously, U.S. fans would have to wait for the show to air on PBS before the episodes would make their way to Netflix for repeat marathon viewing.

That isn't the only change awaiting Great British Baking Show fans when the 2018 season arrives on Netflix next week: Rather than starting off the competition with Cake Week, as has become customary, judges Paul Hollywood and Prue Leith decided to task the bakers with making biscuits for their first outing. For their first weekend in the tent, the 12 new contestants will have to produce cookies that pay homage to a specific region in Britian, before showing off their artistic side with elaborate "selfie" portraits constructed entirely out of biscuits.

(Yes, you did indeed read that correctly.)

Despite The Great British Baking Show's reputation for being gentle, wholesome entertainment, the 2018 wasn't without its controversies. Most notably, the most recent installment of the show resulted in a great deal of fan debate over whether or not Hollywood's famous handshakes — a coveted sign of a job well done that gets given out during the Signature round, from the notoriously prickly judge — were losing their value, as Hollywood offered up significantly more handshakes this year than in competitions past. (Hollywood even gave out the first ever "Hollywood Handshake" for a showstopper this year, so clearly, the level of competition is higher than ever before.)

Another major controversy surrounding the 2018 seasons was whether or not French expat Manon had professional baking experience before appearing on the competition. For the record, she does not — though she did appear on another amateur cooking show in the U.K. before applying for The Great British Baking Show. A Channel 4 spokesperson responded to the controversy, telling The Sun, “We are fully aware that Manon appeared in one episode of The Box and this does not affect her eligibility to take part in The Great British Bake Off.”

Will that experience help her edge out out the competition — or are this year's crop of bakers truly, as Hollywood and Leith say every year, the most talented contestants yet? American fans can find out for themselves in just a few days.

Having the British and American premiere dates in such close proximity also helps to eliminate some of the confusion around The Great British Baking Show's American seasons. When the charming baking program first began airing on PBS, things kicked off with what was technically Season 5, which had just finished airing in the U.K. at the time. From there, PBS aired Season 4 in America, followed by Season 6 and Season 7 — and the seasons began appearing on Netflix in the same order.

However, on August 31, the streaming service picked up where the U.K. show had left off, and added Season 8 to its library, as Collection 5. (When the 2018 Season arrives on Netflix next week, it will be known as Collection 6.)

The recent winner of The Great British Baking Show will join an elite group of amateur home bakers, all of whom have proved that they have the skills to take home the show's iconic cake stand and have the personalities to win the world over.

All in all, that gives American fans plenty of time to make themselves a nice cup of tea and join in on all of the drama and excitement of 2018 Great British Baking Show Season when it hits Netflix on Nov. 9, just in time for the holidays.