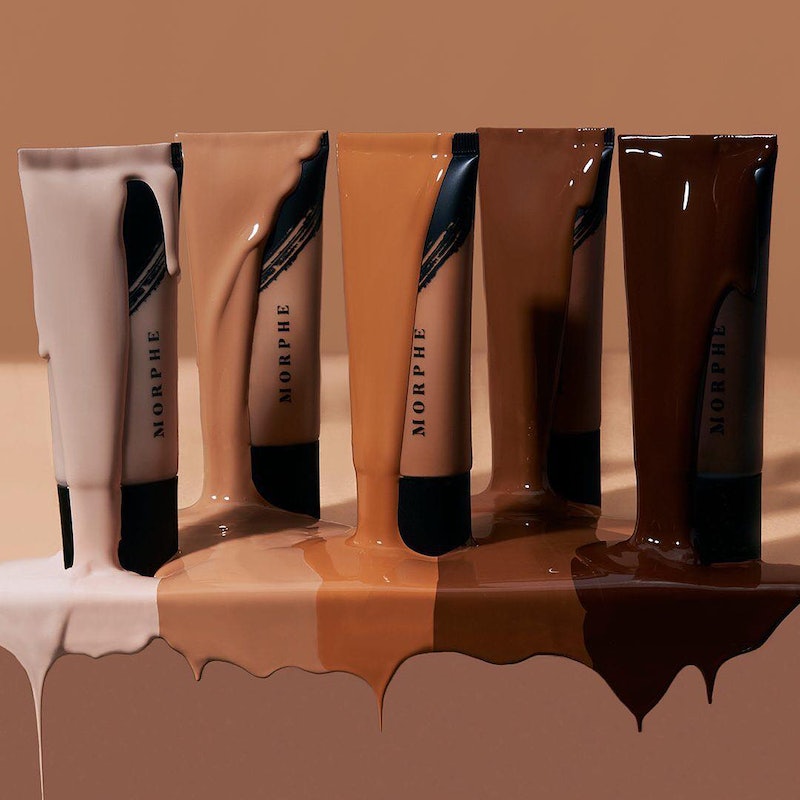 In case you hadn't figured it out yet, 2019 seems to be the year of the complexion product. Less than a month into the new year and two major brands have launched products for the skin. One of those launches is Morphe's Fluidity Foundation, and while you may have thought there was only one way to snag the new full coverage base products, that's no longer the case.

Just in case you've still been setting your resolutions or just trying to get back in the swing of things for 2019, Morphe officially announced their first even foundation barely five seconds into the new year. Okay, that's an exaggeration, but news fit hit the internet with a teaser on Jan. 1. The following day, the brand announced that their Fluidity Foundation was officially coming and in a whopping 60 shades. However, that's not all that the brand had up their sleeve.

Not only did Morphe announce that they had 60 different shades of foundation, but they revealed that alongside the foundation launch, there would be a matching Fluidity Concealer in 30 shades plus a pure white. If you're going to launch concealer and foundation, there has to be primer and powder, right? 15 shades of pressed powder and two primers to be exact.

Sounds bomb? Are you wondering where can you buy it all? While you may have thought Morphe's website and storefronts were the only places. Think again.

On Jan. 20, Morphe's Fluidity Foundation officially hit Ulta online. All 60 shades of the new complexion product from the brand are now available to be shopped via your Ulta account, which means that if you've been hoarding those Ultamate Rewards points, you could be able to get this foundation for even less than its already incredibly affordable $18 price tag.

Of course, the foundation isn't the only item that hit Ulta's shelves. The brand's Fluidity Concealer in all 31 shades (including the white shade) are available online as well for the same cost as the Morphe website: just $9.

There is a bit of a caveat to the launch at Ulta, though. There are two items that you'll still need to shop at a Morphe store or the Morphe website. The brand's pressed powders and their primers didn't make it to Ulta quite yet, so if you want to get your hands on those items, you'll need to place a separate order.

Morphe's Fluidity Foundation, however, isn't the only complexion product that seems to be making 2019 the year of the face. Rihanna's Fenty Beauty is also coming in strong with a major expansion of their own line of base products.

On New Year's Day, Fenty Beauty announced that not only were they launch a massive 50 shades of concealer, but they were also expanding their already inclusion foundation line to 50 shades as well. Add in some new beauty tools and 8 shades of loose powder, and you've got another brand having a major complexion moment.