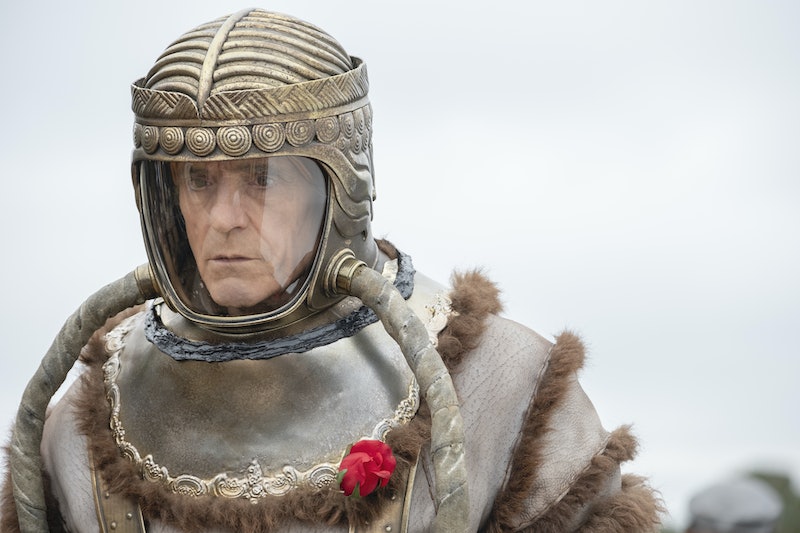 Spoilers ahead for Watchmen Episode 5. One of the weirdest, most mysterious aspects of Watchmen — an already supremely weird and mysterious show — is each episode's brief check-in with Adrian Veidt. These interstitial scenes raise plenty of questions involving the who, what, and why of the situation; but at least one of these questions finally got an answer in the fifth episode: where is Adrian Veidt? It's been clear for some time that the man formerly known as Ozymandias is trapped somewhere against his will, living a purgatorial existence in a lonely manor estate, attended by a parade of obedient but dim-witted clone servants, and watched over by a masked warden. But where exactly is this strange, stately prison?

Viewers caught on pretty quickly that Veidt's purgatory wasn't an earthly one; when he put loyal Mr. Phillips in some sort of homemade suit (RIP, that poor buffalo), the butler came back all frostbitten and very much dead, as though he'd taken a moonwalk without a helmet. Most theories at the time placed the prison on either Mars — where Dr. Manhattan could be seen in a news clip building and destroying a castle that looked a heck of a lot like Veidt's — or the moon, thanks to a nifty transition that dissolved from Veidt's telescope to the hunk of rock orbiting the Earth.

But Episode 5, "Little Fear of Lightning," revealed that Veidt hasn't been on the moon or the red planet. When he finally escapes the confines of his (holographic?) prison thanks to his trusty catapult, he finds himself in a desolate landscape, over which looms the large and distinctive face of Jupiter. While the gas giant technically has 79 satellites, it can probably be reasonably assumed that Veidt is trapped on one of the larger, more famous ones: one of the four Galilean moons. Furthermore, the icy surface means that volcanic, sulfurous Io can probably be ruled out — meaning Veidt's prison is likely located on either Callisto, Europa, or Ganymede.

What's he doing all the way out there, beyond the asteroid belt? Who put him there? And who is Veidt begging to "Save Me," as he spelled out in giant letters using the frozen body parts of dozens of dead Mr. Phillipses and Mrs. Crookshankses? Fans have been divided in their opinion on whether Veidt is the captive of Dr. Manhattan or Lady Trieu; but if those are the two choices, Episode 5 seemed to confirm that it's the former.

In any case, it's known that Veidt's captor is definitely a "he," given his and the Game Warden's veiled references to their overlord.

If Dr. Manhattan is the person holding Veidt prisoner on Jupiter's moon, then perhaps Lady Trieu is the one Veidt was signaling for help; perhaps the satellite belongs to the self-professed trillionaire, and it's conceivable that Veidt would know enough about the woman who bought his company to know when one of her satellites would be passing by overhead. (There appears to be a third word in Veidt's message, but only the letter "D" is visible after "Save Me"; could that be the first letter in Lady Trieu's first name?)

If Lady Trieu does find a way to rescue Veidt and bring him back to Earth, might he end up crash landing in the middle of a field near Tulsa, Oklahoma? Could that have been the object seen falling to Earth at the beginning of Episode 4 — the object Lady Trieu wanted to get her hands on so badly she used a genetically engineered child to bribe the couple living there out of their home?

As to why Dr. Manhattan — if that's truly the identity of Veidt's captor — chose one of the moons of Jupiter as the villain's prison, as opposed to the moon or Mars, that can only be guessed at until the show reveals more about how Veidt ended up there in the first place. Until that point, the location of Veidt's prison is at least a clever reference to a piece of graphic novel trivia. Jupiter is the Americanized version of the original Silk Spectre's last name: Sally Jupiter, née Juspeczyk, mother of Laurie Juspeczyk, now known as Agent Laurie Blake, former girlfriend of Veidt's captor, Dr. Manhattan.

How and why did Manhattan imprison Veidt in the first place? Why did Lady Trieu rescue him (if that's who did)? What is Veidt's plan when he returns to Earth? There are four episodes left to answer all of these questions — and more.