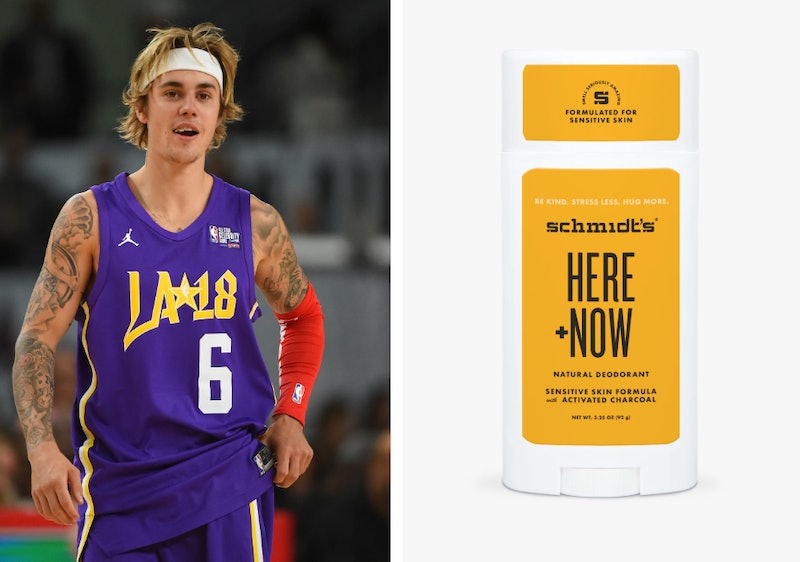 Here+Now is literally right here, right now. Justin Bieber is dropping a Schmidt's deodorant called "Here+Now" via a limited launch on Sept. 5 before an official release on Oct. 1. The deodorant is a gender-inclusive scent that was specifically created by the pop icon. Bieber previously teased the collaboration with the brand, whose tagline is "Natural deodorant that really works," on his personal Instagram back in May.

According to the latest press materials, Schmidt's is offering a sneak sniff, er, peek of the product in early September before the product launches next month. It will be available for just 48 hours via a Deo Drop on the Schmidt's website, and costs $10.99 for a 3.25-oz stick. There is a limit of five deodorants per customer. The early access ends at 1 p.m. ET on Sept. 7.

Schmidt's CEO Ryu Yokoi confirmed that Bieber was fully immersed in the collaboration, saying, "Justin has been integral in the development of Here+Now by bringing his own personal journey with self-care to the table." The singer personally selected the essential oils that were used to create the deodorant's fragrance. He also had a hand in designing the packaging.

Schmidt's reps confirmed to Bustle that Here+Now is not a limited edition product, so Beliebers won't have to worry about scrambling to grab a stick during the initial drop.

Here+Now is only accessible via the link above. It's described as a "mellow" scent, mixing fresh and spicy citrus with warm florals and deep, woodsy base notes to neutralize those pesky odors and keep you smelling fresh all day long. It was specifically designed for anyone and everyone to use. Here+Now is also the mineral-enriched and sensitive-skin version of Schmidt's best-selling activated charcoal deodorant. Like the rest of the brand's offerings, Here+Now is plant-based, and is certified vegan and cruelty-free. There is also no aluminum or artificial fragrances in the product.

Since Schmidt's markets itself as a brand that prioritizes both physical and mental wellness, it actually named this deodorant Here+Now to remind users to be present in and to enjoy the moment. Basically, the Bieber x Schmidt's collab gives new meaning to the notion of "don't sweat the small stuff."

As most Beliebers are already well aware, Bieber has plenty of experience marketing and selling lifestyle products since exploding onto the scene as a teen. He launched a portfolio of perfumes — Girlfriend, Someday, and The Key — back in the earlier part of this decade when celebrity scents were all the rage. The singer also created his very own House of Drew fashion line, which debuted with a range of beige basics that sold out almost immediately. The brand followed with a collection of tees and other casual, normcore pieces featuring Drew Barrymore graphics. Those also flew off the digital shelves.

Additionally, Bieber's wife, model Hailey Baldwin Bieber, filed paperwork in the spring to trademark "Bieber Beauty." The filing is a standard formality to secure the legal rights to the name should the duo decide to launch a beauty brand in the future.

However, Justin Bieber is currently all about Here+Now.