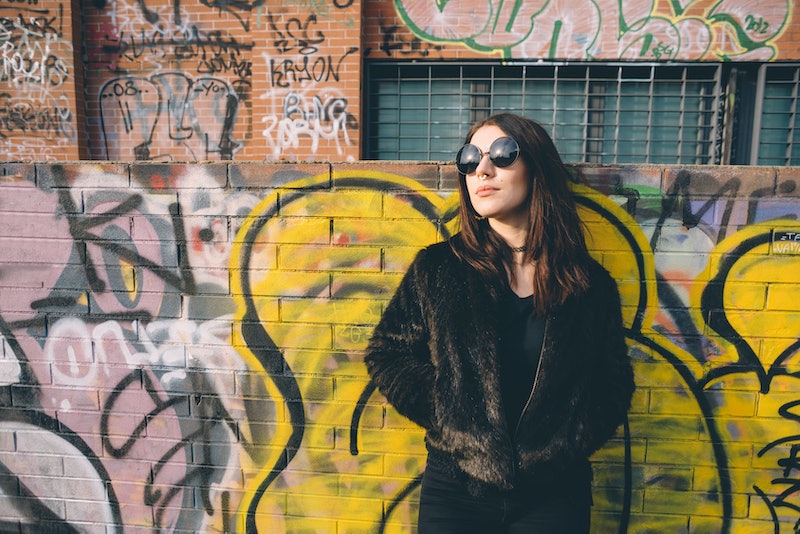 App-less April is now in full swing. Yep, it's just what it sounds like, giving up your dating apps for the month of April. In case you're curious, there are many ways to make the most out of App-less April. After all, in this app-laden world you and I live in, it may seem abnormal for someone NOT to have dating apps installed on their phone. But once you drag them into your little trash can icon and delete them — not forever, just this month! — you'll see how empowering it is. Aside from all the free time you'll have, you'll be forced to do other things with the time you used to spend swiping on the apps! For instance, going to meet people IRL.

"Interacting in person makes people step up their game to be on their best behavior, which is a win-win for everyone involved," Camille Virginia, Founder of Master Offline Dating, tells Bustle. "Because adding a small barrier to a situation — like the risk of rejection in a public setting — instantly separates those who truly want something (and are willing to go for it) from those who didn't really want or value it in the first place. And deleting your apps can be just the push you need to start engaging like that in real life."

OK, I could not agree more with Virginia. I mean, just think about it: When's the last time you met someone in person and then went on a date with them versus a string of not-so-great online dates?

Without further ado, here are a few ways to make the most out of App-less April.

Yes, I know it may be difficult at first, but don't think about your dating apps! It's as though you are giving up another kind of addiction, like sugar or caffeine. The first few days are the toughest, but once you get through them, you can get through anything! True, you may have had several messaging conversations going on with potential matches, but guess what? They'll likely be there when you return to the apps, too! (Even if some of them start to see somebody, they're probably not going to delete their apps after a date or two! And if they do, there's someone else out there for you!)

Like Virginia says, now's your chance to work on real-life interaction again, not just conversing through typed acronyms and emojis. Yep, it's time to polish your social skills. "Use this time to start connecting with people in the real world," Virginia says. "That could mean making a new friend in line at the grocery store, flirting with the barista at Starbucks, or creating a brief but meaningful moment with an elderly person on a park bench. The next time you think to yourself 'I love that woman's red scarf,' say it out loud to her without hesitation. Or ask how someone's day is going when you step onto the elevator with them. Or flash a genuine smile to someone who looks like they could really use it."

You miss a lot of quality one-on-one time with friends — in person — when you're caught up messaging strangers on your dating apps. But the good news is, it's not too late! Your friends may have been caught up in their Tinder, Bumble, and OKC messages, too! And, when meeting up with your friends now, try not to use your phone. I'm sure you can think of friends who are glued to their phones, laughing into the screen as they read a message from someone, whether it's a dating app person or friend. However, those messages are not going anywhere, so, for now, focus on the people in front of you.

They say there's more strength in numbers, right?! So why not have your friends try App-less April with you? You can be each other's support group, so to speak, to check in how the month is going for you. You can make it into a game and each pick places you all should go IRL, whether it's miniature golfing one weekend or beach volleyball the next. Doing activities like these will also help you not be glued to your phone, since it's hard to serve a volleyball (at least well) while checking a dating app! Plus, they are social activities, so you'll have better odds at meeting new people, too.

If you're like me, I'm pretty sure there are some hobbies and activities you've meant to try, but haven't gotten around to doing them — yet, that is. Whether it's checking out the new rock climbing gym in town or starting a morning jogging routine along the lake, now's the perfect time to start.

As you can see from the above, there are many ways to make the most out of App-less April. It's exciting, when you think about all the advantages — the extra free time you have, bonding with friends, making new friends, and perhaps even meeting your future significant other without the crutch of a dating app. So from one App-less April participant to another, best of luck! We've got this!

More like this
Are Gemini & Leo Compatible In A Relationship?
By Kristine Fellizar
The 3 Dating Apps Queer Women & Nonbinary Folks Actually Like
By Emma Carey
TikTok’s Viral “Rating Game” Is Exposing Everyone’s Icks
By Courtney Young
35 Sexy Texts To Send Your Partner
By Griffin Wynne and Carolyn Steber
Get Even More From Bustle — Sign Up For The Newsletter