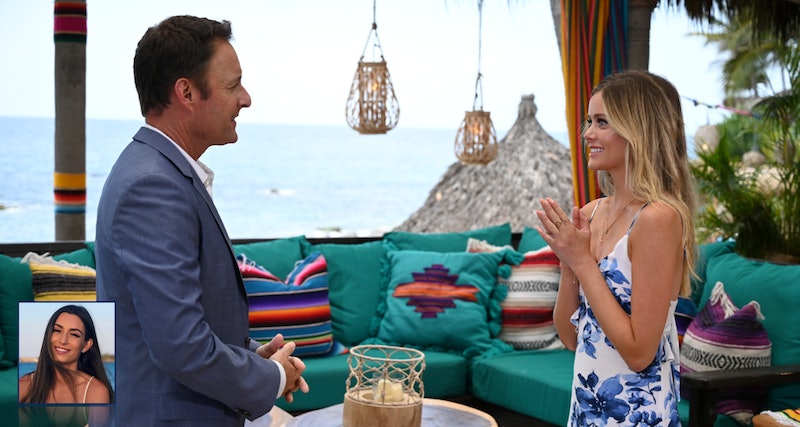 After competing for Nick Viall's heart on Season 21 of The Bachelor, Astrid Loch ultimately found love on Bachelor in Paradise Season 5 with Kevin Wendt. She knows first hand what it's like to weather emotional ups and downs of Paradise, and she's dishing all to Bustle. Read what she has to say about who's headed for a Paradise engagement, why Blake and Kristina should retire from Bachelor Nation, and more in this week's recap.

What. A. Freaking. Week. Can you guys believe Paradise is almost over? This week had it all: makeups, breakups, and our first ever unaccepted rose. It’s kind of a bittersweet feeling knowing this season is almost done. On the one hand, I am so ready to get my life back (four hours of TV per week is a lot) but on the other hand, I’m going to miss these crazy kids on my screen.

But let’s pick up where we left off with Dean returning to Mexico to ask Caelynn to leave the beach with him. Although Caelynn initially seems torn, I think she knew pretty quickly what her decision was going to be. Out of respect she pulls aside Connor, who I have to say is making a lot of good points about why she should stay. Ultimately, the heart wants what it wants (sometimes that’s the chase) and Caelynn decides to give Dean and his van a shot in the real world. I’m curious though, does Dean still think all Bachelor relationships are fake?

Anyways… let’s get to a couple I STAN: Chris and Katie. I have loved watching these two and I can’t stress enough how much these two remind me of Kevin and I. Similar to us, they were never even on each others' radar prior to Paradise. They didn't meet at Stagecoach, they didn't attend one of the many LA influencer events, and they didn't connect on social media prior to the show. They simply showed up on that beach with an open mind and happened to fall for each other. Of course, this doesn’t mean their relationship has been smooth sailing, as Katie continues to question where she stands with Chris. I’m not sure if her insecurities are still there due to the fact that Chris was entertaining other relationships a few weeks ago or if he simply can’t let his guard down 100%, but I’m praying these two find a way to make it work.

Demi and Kristian hit a rough patch this week as well, as we see Demi struggling with PDA, Kristian's “flirting,” and ultimately being in an openly gay relationship. Watching Demi open up to Kristian about her fears and worries makes me both sad and mad, as I couldn’t imagine thinking twice about kissing Kevin or holding his hand in public. Unfortunately this is all too common for so many gay couples out there, and I’m so appreciative that Demi and Kristian are brave enough to let us all into their relationship in order to get the conversation going. At the end of the day, it’s clear these two really care about each other and alongside Katie and Chris they’re my favorite couple left in Paradise.

My favorite person though? Hands down John Paul Jones. All the ladies were definitely sleeping on him, as he is the most romantic and thoughtful guy there. I mean, does it get any cuter than the prom he set up for Tayshia? I don’t think so. I love seeing how much Tayshia laughs around him and I thank the producers for putting together another great montage that reminds me just why I love watching this show.

Unfortunately, this show doesn’t work for everyone, as Monday's episode concludes with Blake setting up a cute date for Kristina that ends with both of them heading home single. I can’t say that I blame Kristina for being cautious about Blake’s change of heart. At the end of the day, these two had the opportunity to date in the real world. Heck, they even had the opportunity to date during all of Paradise, but didn’t choose to until there were no other options left. I think it’s safe to say these two should both retire from Bachelor Nation.

Let’s move on to Tuesday's episode. Remember Dylan and Hannah? Me neither. I honestly almost forgot these two were there until Tuesday’s episode, as we’ve barely seen anything from them. They get a second date where they attend a children’s birthday party that ends with them telling they love each other. I think I smell an engagement from these two.

Not so lucky in love is Connor, who's back on the beach trying to decide if there's any point in staying in Paradise without forming any genuine connections. During Chris and Krystal’s wedding Connor and Whitney hit it off, and since she doesn’t seem to be coming down the stairs, Connor decides to leave. But guess who’s on her way to Paradise?! WHITNEY FREAKING FRANSWAY! Tia said it best on Twitter when she pointed out the fact that producers were able to bring on Demi’s girlfriend but weren’t able to have Whitney show up an hour earlier. It’s just rude and Whitney deserves better. Anyway, long story short, Whitney shows up, Connor is gone, Whitney goes after Connor, and they live happily ever after.

The rest of the episode included a lot of filler, the existing couples questioning whether or not they could see themselves working in the real world, and us saying goodbye to Sydney, Haley, and Luke. And with that, it’s time for Chris Harrison to give us the infamous, “Paradise is over as we know it,” line that I’m pretty sure he said exactly the same during our season.

To nobody’s surprise we see the end of Bri and Matt and Chase and Angela, mostly because these couples just haven’t known each other for long enough. As expected Dylan and Hannah head to Fantasy Suites along with Demi and Kristian, Clay and Nicole, and hesitant but hopeful Chris and Katie. The true shock of the episode came with the end of JPJ and Tayshia's relationship. I’m not sure that Tayshia herself knows why she broke things off with John, but my guess is that she was feeling the same pressure Kevin was feeling while we were in Paradise. An engagement after just a few weeks is scary and honestly crazy. Who knows, maybe these two will follow in our footsteps and figure things out for themselves away from producers and cameras.

That’s all for this week. One more episode to go. Who will end up brokenhearted, and who will end up engaged? My money is on Dylan and Hannah for an engagement.