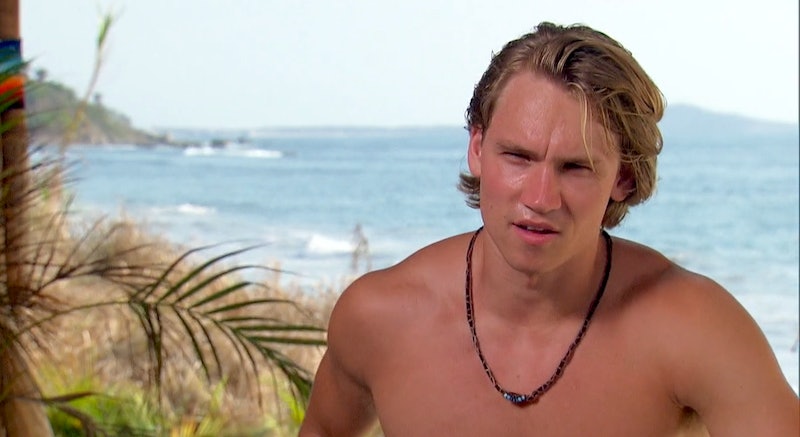 While he made it quite clear he won't go on Derek's podcast to spill the Paradise tea, Tayshia did go on the Bachelor Happy Hour podcast with Rachel Lindsay and Ali Fedotowsky-Manno. During the interview, Tayshia seemingly slipped and said she was single after Paradise — which doesn't bode well for the very smitten JPJ. However, Betches reported that Tayshia had shared a photo on Instagram on Aug. 14 where it looked like she may be fishing on John Paul Jones' boat. Tayshia deleted the photo, but this could be evidence that this pair is still hanging out post-Paradise. Additional social media evidence that they are together also comes via Tayshia seemingly defending JPJ in response to a tweet that has since been deleted and the time they bantered about the moves JPJ put on her.

The preview for the final weeks of Paradise shows that the drama between Tayshia and JPJ is far from over. JPJ claims while he wears a crown on his head, "I'm the king of Paradise!" and then it appears that JPJ tells Tayshia, "I'm in love with you." But then, Tayshia is shown crying and running toward JPJ while saying, "I'm sorry." With all the back-and-forth they've experienced in their short-lived relationship, an engagement between these two would be pretty surprising. But that doesn't mean that JPJ is necessarily single since there's always the chance he reconnected with Tayshia after Paradise even if they don't leave the show together.

During this BiP season, John Paul Jones has been active on social media, like when he apologized for making a scene at Chris and Krystal's wedding. But as a good member of Bachelor Nation, he hasn't revealed his current relationship status on Instagram or Twitter. He will be on an upcoming episode of the podcast Reality Life with Kate Casey (and possibly even on Dean's podcast Help! I Suck at Dating if a playful Twitter interaction is to be believed). So he will probably go into whether or not he is single on that podcast (still not yours, Derek) ... but you might have to wait until after his BiP fate with Tayshia airs.

One clue that he might be single is a recent event he attended. Us Weekly reported that on Sept. 5, JPJ and Derek were at a Victoria's Secret event in New York City where an eyewitness claimed they were flirting with models. "John Paul, specifically, was seen recreating his signature hair flip from the title sequence of Paradise Season 6 for female fans who asked," the report said. But Us Weekly also noted that both JPJ and Derek left the event alone. So was he playfully flirting with other women around the time his girlfriend Tayshia was celebrating her birthday in Vegas with friends? Or is he truly single and just so happens to have gone to a Victoria's Secret party to distract him from the fact that he didn't end up with Tayshia?

The only thing that's certain ahead of the last two episodes of Bachelor in Paradise Season 6 is that JPJ will either be leaving with Tayshia or going home solo. And fans will just have to wait and see if Tayshia is as confident in her relationship with JPJ as he is.