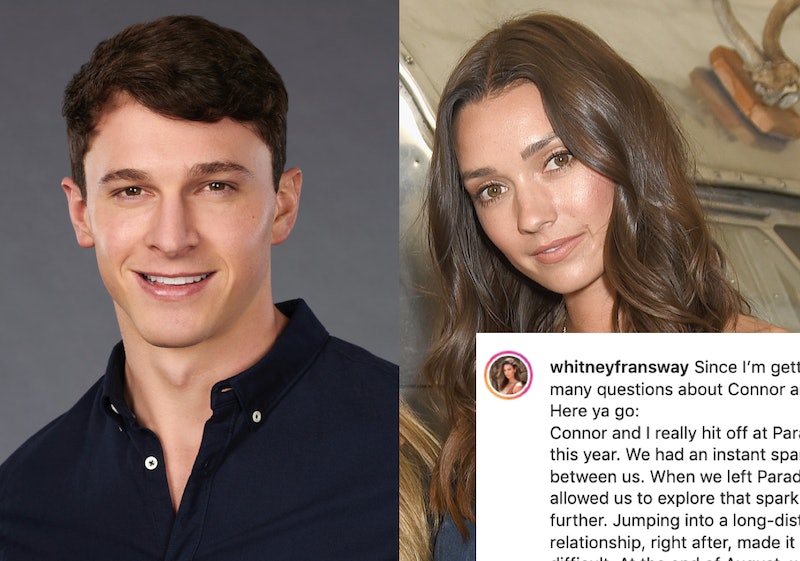 It's only been a week since Bachelor in Paradise ended for the season, but there's already a bummer of a follow-up. Last week, fans found out that Connor Saeli and Whitney Fransway had already called it quits, and now, there's a little bit more information as to why. Whitney explained her split from Connor in a new Instagram, and it truly seems like there are no hard feelings between the former couple — it was just the right time for them to go their separate ways.

In the post on Sunday night, Whitney shared a photo of her and Connor on the beach, along with a lengthy caption about why they decided to break up. She wrote:

Connor and I really hit off at Paradise this year. We had an instant spark between us. When we left Paradise, it allowed us to explore that spark further. Jumping into a long-distant relationship, right after, made it more difficult. At the end of August, we started having more serious conversations about where we saw our relationship going. We have been nothing but honest in communicating our feelings throughout the relationship, but we came to a conclusion that it just wasn't working right now.

Being that Connor is from Texas while Whitney lives in California, there definitely was a distance between them — and as she explained, it can be hard to make a brand new relationship work with that kind of obstacle in the way.

Whitney went on to say that they're still friends; the chemistry they needed just wasn't there. She continued:

The connection we had wasn’t igniting as much as it did in the beginning. I have grown to care for him very much and we have shared a lot of memories together in the past few months. I will always have nothing but respect for him. We are still on good terms and ultimately, still have the foundation of a friendship. We have mutually decided this is the best decision for both of us. Thank you to everyone who was rooting for us and has been so so supportive. I appreciate it so very much. Love you all!

After things didn't exactly pan out with Caelynn, Connor admitted that he was hoping to run into Whitney in paradise, but left just as she was arriving. Whitney ended up chasing after him to his hotel, and it seemed like they were going to live happily ever after. But now, it seems like things didn't quite pan out that way.

News of their split first broke last week, when Connor told People that they'd already broken up — even though on the BiP reunion, it looked like they actually were still together after the show. "We rushed into a relationship," Connor told the outlet. "And we realized that we just weren’t connecting anymore."

Connor and Whitney may not have worked out, but there's always next season of Bachelor in Paradise. And until then, it seems like they're both doing just fine.