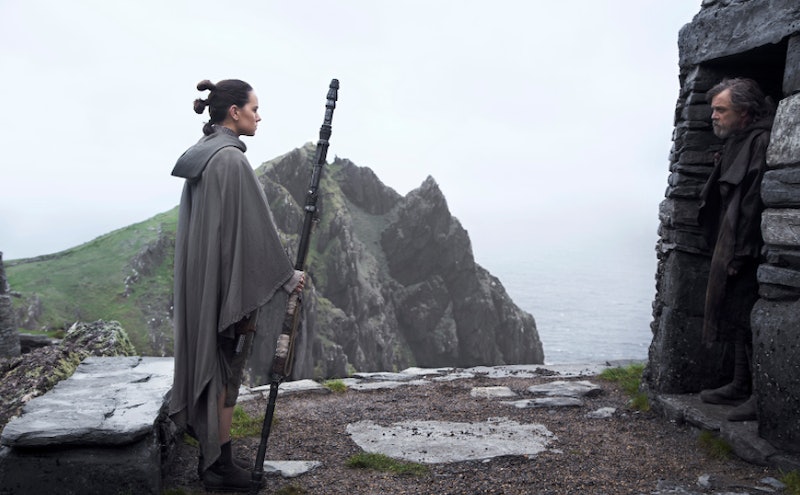 The Last Jedi is almost here, which means Star Wars fans of every ilk will soon be invading theaters for the latest installment in the world's most popular movie franchise. Fans are hoping the film, a sequel to 2015's The Force Awakens, will answer a number of questions that movie put forth, like what Snoke's real identity is, whether or not Luke Skywalker is evil now, and perhaps most intriguing, who Rey's parents are. The internet is filled with theories regarding the identity of Rey's parents, and with possible answers in The Last Jedi fast approaching, there's no better time than the present to go over them.

First off, here's a little refresher on what we know so far regarding Rey's parents based on what happened in The Force Awakens. We know she has been on her own since she was very young, abandoned on the desert junk heap planet Jakku by her parents who left her with alien junkyard dealer Unkar Plutt. She is reluctant to leave Jakku initially because she believes that her parents will one day return to the planet, but Maz Kanata tells her that she knows they're not actually ever going to come back. Facts-wise, that's basically all that's known, but it's been enough for a number of theories to spring up.

The most prominent theory surrounding her parentage states that Luke Skywalker is Rey's father. Many fans believe that he and a mystery woman had Rey, and then left her on Jakku when Luke went into hiding following Kylo Ren's betrayal. This theory makes sense for a number of reasons. First, and most obviously, when Rey picks up Luke's old lightsaber in TFA, Maz tells him that it belonged to Luke and his father before him, and now it calls to Rey. That sure makes it seem like she's next in line to receive a family heirloom — her family heirloom. Luke being her father would also explain why she was abandoned. As the last Jedi of the new film's title, Luke is a wanted man. The First Order wants him dead, so to keep his daughter safe, he left her on a backwater planet where no one would ever go looking for her. Makes sense.

The next most likely scenario is that Rey is the daughter of Leia and Han Solo. The fact that she is incredibly powerful with the Force, approached only in terms of raw power it seems by Kylo Ren, suggests that she is a Skywalker. And if she's not Luke's kid, then she would have to be Leia's. We already know Leia and Han had one kid in Kylo, and it's hard to deny that he and Rey share some sort of bond. The trailers for The Last Jedi only show that bond becoming stronger, with Rey openly asking for Kylo's help and Luke comparing her to Kylo in her training, so these two being brother and sister would make a lot of sense.

Then there are people who believe Rey is a Kenobi rather than a Skywalker. If she is a descendant of Obi-Wan Kenobi, then she would have to be his granddaughter since he died before she was born. His lineage would also explain her innate Force abilities, and advocates for this theory point to the fact that she shares his British accent — a rarity in Star Wars films and usually reserved for special characters.

Finally, the least likely theory that's still being bandied about suggests that Rey is the daughter of Jyn Erso, the protagonist of Rogue One. Rogue One was meant to be a standalone Star Wars film, taking place right before A New Hope, but some fans of course are assuming it holds a greater significance than its appearance suggests. The theory posits that Jyn had a secret daughter that became Rey, but there isn't much basis for it. For one, Jyn died at the end of the film, meaning Rey is too young to be her daughter. But beyond that, Jyn didn't have the Force, so Rey's abilities would not be explained by Jyn being her mother. Also, Jyn is very much an unsung hero, and it seems likely that Rey's parents must be someone who's legendary within the Star Wars universe, otherwise there's no point to making her parentage a mystery since the revelation should shock and change her.

It's not yet confirmed whether or not The Last Jedi reveals who Rey's parents are, but most fans are putting their stock in the above theories in case it does.