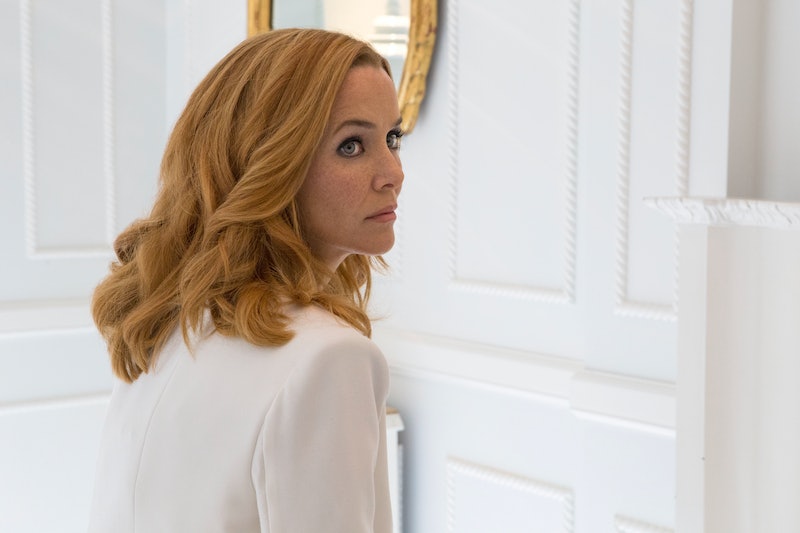 Nothing is as it seems in Runaways. Parents are evil, teenagers have superpowers, and dinosaurs live in basements. But of the many surprising elements featured on the show, there may be none more shocking than the identity of the alien-looking creature being hidden by Leslie Dean. Who is Jonah on Runaways? At the end of Episode 5, "Kingdom," it's revealed that the character who had been previous credited as "Mysterious Man" is just a guy by that name. While it seems that Jonah is now back to his restored state, fans are still no closer to knowing who exactly he is, or what his plans are.

What's clear is that Jonah is not only benefitting from the Pride's efforts, he may also be responsible for the Pride's existence in the first place. In the episode's opening scene, a flashback shows Jonah visiting Geoffrey Wilder in prison with an offer to go in on a business deal. Jonah is interested in purchasing some seemingly useless land that Geoffrey inherited — possibly related to the site for the property that Geoffrey is breaking ground on in Season 1 Episode 2, "Rewind." Whatever Jonah's scheme is, however, it's likely that it extends far beyond land development. Combined with the resources of the other members of the Pride, it seems like Jonah has some big designs on the future of Los Angeles.

Jonah's connection with the Pride is confusing, but he is definitely closely tied to them. He seems to offer the members of the organization great opportunities, such as he did to the Wilder family, and in exchange they must sacrifice teenagers to him once a year or else he becomes the grotesque, shriveled figure that Leslie has been tending to all season. Jonah's true nature is unclear. Is he an immortal human? Is he magic? Is he an alien of some kind? What ever is going on with Jonah, there's a chance that one of the Runaways inherited it.

Once Jonah is back to his true form, he makes a request of Leslie. It had been hinted in Episode 4, "Fifteen," that Leslie's relationship with the mysterious man was romantic and Episode 5 confirms it. However, both fans and Leslie were in for a surprise when Jonah tells Leslie that he "wants to see her." It seems that Karolina's father may not actually be her father and that she's the love child of the affair between Jonah and Leslie. If that's the case, Jonah may be responsible for Karolina becoming a human light show every now and then.

While the origins of Jonah are is still a mystery, he's going to have a major impact on the series going forward. It's hardly a coincidence that moments before it's revealed that Jonah is the mysterious man in the breathing mask, Victor Stein's future-telling device shows a video of Los Angeles crumbling to the ground. It's hard to believe that a mysterious figure that survives by having teenagers sacrificed isn't somehow related to the prophesied destruction of Los Angeles. Of the many questions surrounding Jonah's existence, however, the most important may be, "Can he be stopped, and who can stop him?"

The Runaways have yet to meet Jonah, but searching for the truth behind their parents' ritual will inevitably lead them making that discovery. However, just because the teens are dedicated to being good guys doesn't mean that one of their parents won't be the one to stop him. The Wilders have been hesitant about their participation in the Pride from the beginning, and Victor Stein's guilt over killing seems to be starting to catch up to him. Jonah may end up being betrayed by his own followers before the Runaways even have a chance to stop him. Whatever Jonah is up to, it likely does not bode well for the superhuman teens, the Pride, or anyone in the city of Los Angeles.