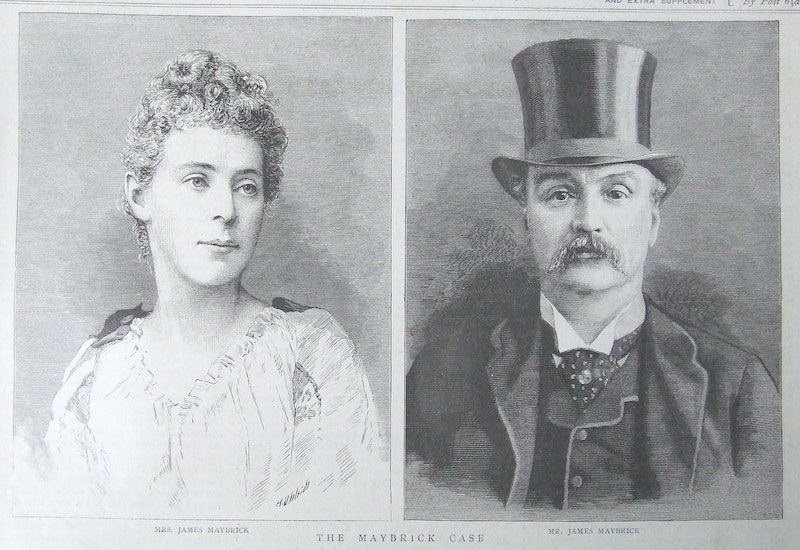 It’s a question that pops up again and again: Have we finally figured out the identity of Jack the Ripper? One Ripperologist is currently claiming that he has — and what he’s pointing to as evidence supports the theory that Liverpool cotton merchant James Maybrick was Jack the Ripper. Maybrick is, of course, just one of a huge list of possible Ripper suspects, and personally, I don’t find the case for him particularly compelling. But because, as Kelly Faircloth at Jezebel’s Pictorial points out, “proof” of different Ripper theories tends to emerge every few years, let’s take a look at what we’ve got this time and see what it tells us. If anything, it’s a good way to occupy your lunch break, right?

The history of this particular theory is… convoluted, to say the least. It goes a little something like this:

In the early ‘90s, a diary alleged to have belonged to Maybrick was found — or “found,” depending on who you talk to — in Liverpool. (Exactly where it was found also varies, which is one of the reasons this theory is so complicated.) The diary doesn’t actually name Maybrick; however, details in it consistent with what we know about Maybrick make a case for it belonging to him. Within the pages of the dairy, the author confesses to the murders of Ripper victims Mary Ann Nichols, Annie Chapman, Elizabeth Stride, Catherine Eddowes, and Mary Jane Kelly, as well as one other alleged murder committed in Manchester; he signed it, “I give my name that all know of me, so history do tell, what love can do to a gentleman born. Yours Truly, Jack The Ripper.”

As for why the murders stopped? The Maybrick theory has a tidy ending: Mary Jane Kelly was found dead (warning: graphic photos at the link) on Nov. 9, 1888. Maybrick was poisoned by his wife, Florence, in 1889 — that is, the murders stopped because Maybrick himself had been killed. This, of course, doesn’t take into account the fact that other murders that occurred after the “canonical five” suspected to be the work of the Ripper were executed well into the 1890s (Frances Coles was killed on Feb 13, 1891), but it’s true that those murders were never proven to be Ripper kills, so… I guess that’s where the Maybrick theory falls on the post-canonical five theory.

But is the diary authentic? That’s where it starts to get tricky. It was originally brought to public attention in 1992 by a Liverpudlian scrap metal dealer named Mike Barrett, who said that a friend, Tony Devereux,had given it to him while they were drinking at a pub called the Saddle Inn. This couldn’t be confirmed, however; as Phillip Knightley wrote in a piece aimed at debunking the diary as a hoax in the Independent in 1993, Devereux died in 1991. What’s more, according to Devereux’s family, he had never mentioned the diary to them. Additionally, Barrett’s wife, Ann, said in 1994 that the diary had actually been passed down through her family for generations — contradicting Barrett’s original story.

Tests on the diary have yielded conflicting results; according to some tests, the ink is authentic, while according to others, it’s of the 20th century. Handwriting analyses have also found some issues, with one stating that the handwriting looks more modern than something written during Maybrick’s lifetime should, and another comparing the diary’s handwriting with a sample we know came from Maybrick and concluding that they’re entirely different.

And then there’s this: Barrett has confessed to having made it all up, and then retracted his confession, multiple times. In 1995, for example, he signed a sworn affidavit that the diary was fabricated, which he retracted the following day.

Which — finally — brings us to our current news: Robert Smith, author of the new book 25 Years of the Diary of Jack the Ripper: The True Facts, believes that he’s conclusively proved that the diary is authentic. It’s been a long time coming —director, actor, and Ripperologist Bruce Robinson has headed up much of the charge, publishing his own book in 2015 positing notonly that the diary is authentic, but that it actually belonged to James Maybrick’s brother, Michael — and it all hinges on what Smith believes are the diary’s true origins.

Smith says that he’s traced the diary to a property in Liverpool known as Battlecrease House (seen here) — which was once Maybrick’s home. The Telegraph lays out the chain of events as follows:

In 1992 a local firm of electrical contractors, Portus & Rhodes Ltd, were working at [Battlecrease House] carrying out various renovations.

Mr. Lyons was a regular in The Saddle Inn public house in Anfield, where Mr. Barrett was also well known character.

According to time sheets obtained from Portus & Rhodes Ltd, Mr. Rigby and Mr. Coufopoulos were both at work on the morning of March 9 1992, the very day that Mr. Barrett contacted London literary agent Doreen Montgomery with the immortal words, “I’ve got Jack the Ripper’s diary, would you be interested in seeing it?”

Which, honestly, sounds a little sketchy to me — but what I think we’re supposed to take away from it is this: The three workmen allegedly found the diary while they were working on the house; they allegedly met up with Barrett at the pub later that day (which, by the way, is the same pub in which Barrett originally said he was when Tony Devereux allegedly gave him the diary); and then Barrett, having obtained the diary, made the call to Doreen Montgomery. According to the Telegraph, Smith believes that Barrett and the workmen didn’t reveal where the diary had allegedly come from “because they were frightened of being prosecuted.”

Personally, though, I’m… skeptical. I’m always skeptical, because honestly, at this point, I don’t think we’re ever going to be able to prove anything conclusively; it’s been far too long, and the physical evidence is always far too suspect — either because it’s too old to be of use or because we can’t prove its authenticity — for us to base anything certain on it.

Besides, every couple of years, a new theory — which is pretty much always the resurfacing of an old theory — begins circulating, with people being positive that this time, it’s really been solved: In 2014, it was Aaron Kosminski, a 23-year-old hairdresser whose DNA had allegedly been found on Catherine Eddowes’ shawl; in 2001, it was Walter Sickert, a troubled painter who some believed revealed homicidal tendencies in his work (novelist Patricia Cornwall has written several books about this theory, both of which I found wholly unconvincing... but maybe that's just me); and so on and so forth.

Maybrick himself has actually fallen in and out of favor as the key suspect several times. After the initial burst of activity in the early '90s, the diary was widely regarded as a hoax. Interestingly, though, in 2004, more than a decade after the “discovery” of the diary and almost as many years after Barret’s initial affidavit, a pocket watch was found to have an engraving that — again — convinced a lot of folks that yes, Maybrick was Jack the Ripper after all; not much came of it, though, and after some time, the theory drifted back to the bottom of the stack again.

But even if we never figure the mystery out, I think it’s telling that we’re still working on it. We’re fascinated by the unknown, and we often feel the need to solve every possible problem we can. That can be a good quality, or it can be a not-so-good one, depending on whether the “problems” we’retrying to solve are actually problems and whether we’re working on the things that really need solving.

What if we applied the same sort of fervor we do to trying to figure out who Jack the Ripper was to, y’know, other things?

Just… think about that for a minute.