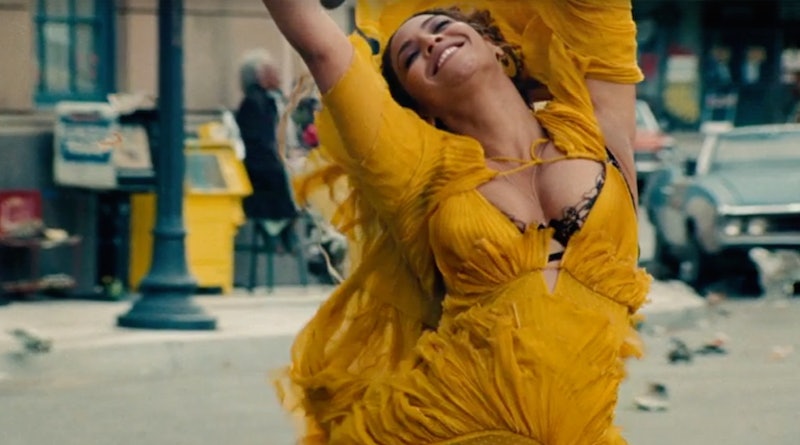 "I have three hearts." Those are the words that are all over Beyoncé's website the morning after she announced that Beyoncé pregnant with twins. Her one Instagram photo celebrating the news that she's been "blessed two times over," has managed to become the most-liked Instagram post in history. In less than day, nonetheless. Now Beyoncé has blessed us with a full pregnancy photo shoot that's accompanied by a poem on Beyoncé's website that repeats those four words over and over again: "I have three hearts." Those words were not written by Beyoncé herself, but they were written by a poet who has become a go-to for the artist: Warsan Shire.

Shire's name should sound familiar since the Kenya-born, Somali-British writer is also the poet whose work was used in Beyoncé's Lemonade. Shire often writes about black womanhood and infidelity, which made her a good fit for Beyoncé's 2016 album. Shire's work was so integral to the visual album that Beyoncé even credited her with “film adaptation and poetry."

Shire also explores motherhood in her poetry, discussing her mother's experience having her in her first book of poems, 2011's Teaching My Mother How to Give Birth. The poem featured here is fittingly called "I Have Three Hearts" and looks at the holiness of motherhood and womanhood.

Shire's words run alongside photos of Beyoncé taken by Awol Erizku, the Los Angeles and New York-based multimedia artist. The poetry, "I'm watching life inside me grow; there's life growing inside of me/ and i'm beside myself with dreams," is a prelude to a photo of Beyoncé as the Virgin Mary, a crown of flowers on her head as she holds her belly and her breast.

Beyoncé's latest photo album includes throwback shots of her pregnant with Blue Ivy followed by snapshots of her first daughter's four years, all sticking with the rule of threes: She's a family of three with Blue and Jay Z, and now she's a three-hearted woman preparing for three children.

This modern clash of art and literature is not just an announcement, but an opus that makes visual references to Mother Mary, the Egyptian queen Nefertiti, and Venus in the style of Kehinde Wiley, a New York-based painter who puts his own modern spin on classic portraiture by recasting the subjects as young Black men and women.

Beyoncé, though, has cast herself as black Venus, the same goddess of love, desire, fertility and prosperity, just with darker skin. The black Venus that, as The Root explained, was once the "ideal standard of beauty," despite being portrayed as a surprisingly domestic goddess in a 16th century bronze sculpture. It's that motherly Venus who feels so modern, as if she is the ancestor to the African-American mothers having babies in the time of Black Lives Matter, worrying about how she will protect her little one in this world from going to the next one.

That's the Venus Shire writes of and that is who Beyoncé says she's "growing into." A mother who has love, concern, and fear for those who will bear her name.

Mother is a cocoon where

swells and stretches to protect her

child, mother has one foot in this world

and one foot in the next,

Beyoncé has been reborn, not just as a woman and expecting mother, but as an artist. This photoshoot is that announcement: Her life reflects her art, and her art reflects her life. It also teases that the follow-up to Lemonade could be a beautiful tribute to Queen Bey as mother. The last installment of a trilogy that began with her sexual awakening on 2013's self-titled, followed up with her examination of infidelity as connected to black womanhood, can end with a mother's message of hope. Maybe Beyoncé and her twins are really going to save us — by forcing us to realize that in life and in art hope is never lost.

More like this
Taylor Swift, Kerry Washington & More Speak Out On Uvalde Mass Shooting
By Jake Viswanath
Selma Blair Wrote Through The Pain
By Samantha Leach
We’ve Got A Text! 'Love Island' 2022 Finally Has A Release Date
By Sam Ramsden and Frances Stewart
Watch The Emotional Trailer For Dolly Alderton’s 'Everything I Know About Love'
By Bustle UK
Get Even More From Bustle — Sign Up For The Newsletter