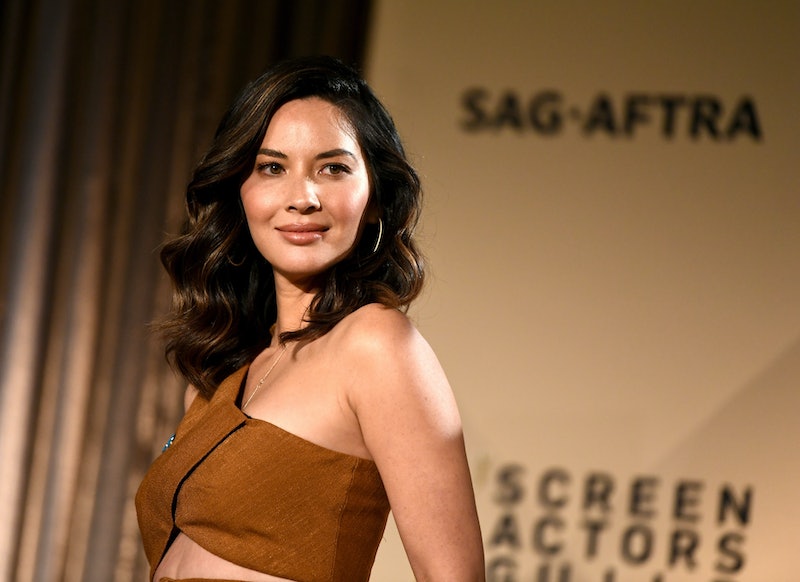 As the awards season marches on, the 2018 Critics' Choice Awards will be offering its own opinions on the best films and television of the year. The Broadcast Film Critics Association may be playing second banana to larger awards shows like the Golden Globes and the Oscars, but the CCAs have something that neither of those major awards have: a woman hosting. For those interested in catching the event, which will surely have its fair share of must-watch moments, the Critics' Choice Awards ceremony will air on The CW on Thursday, Jan. 11.

After the year that saw the rise of the #MeToo movement and a bevy of sexual assault allegations in Hollywood, the CCAs are taking a different approach from the Golden Globes and the Oscars when it comes to who is running the evening. The ceremony will be hosted by Olivia Munn, known for a prolific career than has included blockbuster films like X-Men: Apocalypse, television dramas like The Newsroom, and a stint as a correspondent on The Daily Show With Jon Stewart. While Munn will likely be an exceptional host (one of her early roles was hosting the daily Attack Of The Show! on the now-defunct G4 network,) this choice is also a sign that the CCA producers recognize that Hollywood needs to put its focus on listening to women and putting women forward, in every possible way.

At a time when it's more important than ever to give women a platform to speak, the Critics' Choice Awards is doing exactly that. Along with having Munn host the evening, the ceremony will feature Wonder Woman star Gal Godot being presented with the #SeeHer award. A spokesperson told E! News that the award recognizes women who "push boundaries [and] recognize the importance of accurately portraying women across the entertainment landscape." Gadot will be the second-ever recipient of the special CCA award, following Viola Davis in 2017.

While the CCAs will be handing out awards to the most well-regarded films and TV shows of the year, the ceremony is also a platform for the Hollywood community to present themselves to fans watching from hme. The broadcasting of Hollywood award shows gives households everywhere a direct look into the film industry. For example, during the 2018 Golden Globes', which aired only two days before the CCAs, host Seth Meyers used the opportunity to mock the various scandals that rocked Hollywood in the past year, but also to encourage the industry to start treating women in a fair and equal manner. Meyers said in his opening monologue, "People in this room worked really hard to get here, but it's clearer now than ever before that the women had to work even harder." While the Golden Globes set the bar for addressing Hollywood's flaws, Olivia Munn will likely leap over it with ease, as she's been vocal about the epidemic of sexual assault throughout the world.

In 2017, a report from The Los Angeles Times listed Olivia Munn as one of six women who had accused director and producer Brett Ratner of sexual misconduct. (Ratner denied all accusations through a 10-page statement from his lawyer, Marty Singer. Later, Ratner announced that he'd be "stepping away" from his Warner Brothers duties until the "issues" were "resolved.")

Munn revealed to The Los Angeles Times in a later interview that despite the recent actions studios have taken regarding sexual misconduct in Hollywood, she is still somewhat pessimistic about the situation, long-term. She said:

"If you ask me, now, do I feel good? Do I feel like I have justice? No ... I'm thankful that we're in this moment where our voices actually matter. But I don’t feel like there’s actually an awakening of consciousness in Hollywood. There’s an understanding that there will be backlash in the marketplace and to their bottom line if they don’t make these big announcements. They aren't woke; they're scared."

Olivia Munn's hosting gig will likely feature the same good-natured jokes as many award show hosting gigs do, but it will also likely serve as a rallying cry to demand respect for women in Hollywood and around the world.