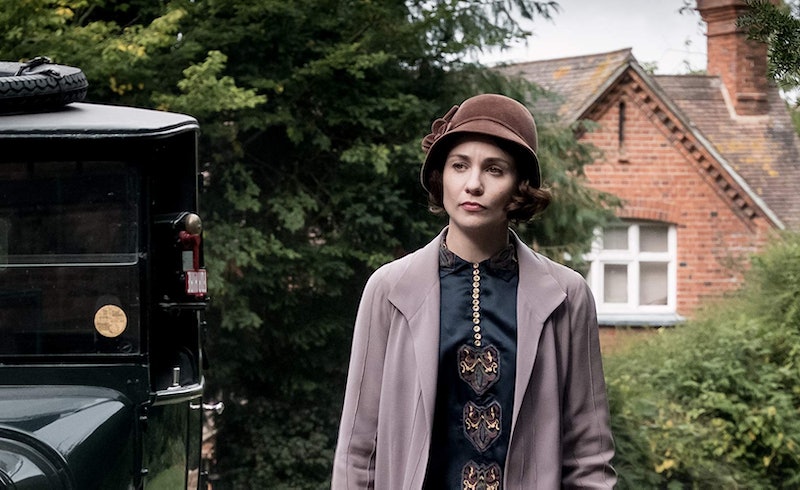 Coming to theaters on Sept. 20, the Downton Abbey movie meets back up with the Crawley family less than two years after the events of the series finale. It's the fall of 1927, and King George V (Simon Jones) and Queen Mary of Teck (Geraldine James) are making a historic visit to Downton. But it isn't just the British royals that the lords and ladies of the estate have to accommodate. With them come their staff, including the Queen's lady-in-waiting Lady Bagshaw (Imelda Staunton) and her maid, Downton Abbey newcomer Lucy Smith (Tuppence Middleton).

"You do sort of worry, going into something as big as this, that that it will be cliquey, or the fans won't accept you, and that any number of things can go wrong," Middleton, who also starred as Riley in Sense8, told Harper's Bazaar UK of joining the returning cast for the film. "But it was so welcoming, and everyone was glad to see some new faces, and for these new characters to come in and affect the lives of some of the beloved characters that have been in the show for years. It adds fresh energy to it, I think."

While Lucy's boss, Lady Bagshaw, finds herself clashing with her cousin, the Dowager Countess of Grantham (Maggie Smith), the maid becomes quite friendly with one of the original characters in the cast. And in fact, Town & Country reports that while Lucy is at Downton at a professional capacity, she finds herself "distracted by a new relationship instead."

That relationship is with none other than Tom Branson (Allen Leech), former chauffeur and the widower of Lady Sybil Branson (Jessica Brown Findlay). Since Sybil's tragic death after the birth of their child back in Season 3, Tom has been named the estate agent for Downton Abbey by Lord Robert Crawley (Hugh Bonneville) and has gained the respect and trust of his in-laws. But he has yet to find true love again. It looks like the arrival of Lucy changes things for the eligible bachelor. And though not much has been revealed yet regarding the two characters' relationship, things surely won't come easy because of the restrictive class barriers Branson already had to deal with back when he and Sybil first struck up a romance.

In her review of the film for Vogue, Marley Marius calls Branson the movie's "unlikely hero." It seems that his bravery and general good guy qualities will be rewarded by a new connection and hopefully some personal happiness. Of course, young Sybbie Branson (Fifi Hart) will have to decide if she likes her father's new love interest.

In addition to this film, Middleton can be seen in another period drama this fall. In The Current War, out Oct. 4 in the U.S., she reunites with her Imitation Game co-star Benedict Cumberbatch. The biopic is a retelling of the race to master electricity, between inventors Thomas Edison (Cumberbatch) and George Westinghouse (Michael Shannon). Middleton plays's she plays Edison's wife, Mary.

And this may not be the end of her Downton journey either. If Lucy and Branson end up attached by the end of this one, Middleton is almost guaranteed to appear in the potential sequel.