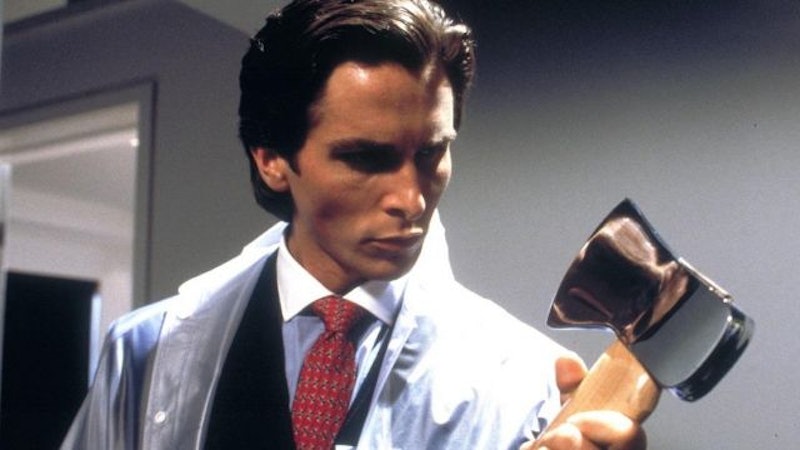 Everyone has their favorite style of Halloween movie. Some love the campy fun of family films they grew up with, like The Addams Family or Hocus Pocus. Some can't do horror because they're giant chickens and prefer a scary movie that is also funny (waves!). But some go all in and prefer the scariest, most bone-chilling horror movies out there. Whether you like supernatural ghost stories or realistic bloody slasher flicks, there's a good, scary horror movie out there for you. But for me, the scariest movie to watch this Halloween is American Psycho, which is all the more terrifying because the events of the movie feel so incredibly possible right now.

Set in 1987, 2000's American Psycho revolves around the character of Patrick Bateman (Christian Bale), a wealthy investment banker who prides himself on his fancy clothes, beautiful fiancé, and exorbitant lifestyle. He dines at the hottest restaurants, buys expensive furniture, and hobnobs with so-called important and powerful people. But Patrick has a hidden side: he's an unhinged killer who brutally murders a number of people for fun. Or, at least, he imagines himself to be one. The movie, and the novel on which it's based, never truly answers the question of whether Patrick commits these atrocities or if he's fantasizing about them. But both are equally terrifying, and yet, spoiler alert, he gets away with it all in the end. Let's see, a privileged white man getting away with vicious crimes? Sounds terrifying, and also like it happens all the time.

Despite its premise, American Psycho is remarkably un-bloody, with most of the violence happening off screen or just outside of the camera's frame. But what makes the movie so frightening is just how much we feel like we know who Patrick Bateman is. That we understand exactly what type of guy he is. His actions and desires are deeply rooted in misogyny. The scariest thing about the movie is that it reminds us that violent misogyny is often hidden behind a veneer.

In recent years, the Internet has become a place where misogyny has been allowed to flourish. Pick-up culture gave way to Men's Rights Activists, Alpha and Beta males, and the Incel phenomenon. These men, who feel directly threatened by the progress being made with regards to rights for women and minorities, have made their feelings known online. Many female writers with an online presence have been sent hate-filled messages if not outright death threats. And movements like those advanced by MRAs and Incels have ties to the growing White Nationalist threat in the country.

What's worse is that men like Patrick Bateman, who live in extreme privilege as a result of their wealth, connections, and whiteness, are getting away with atrocities in the real world, as well. It's not hard to connect the fact that Bateman possibly gets away with his murders at the end of the film with any number of affluent white men who have managed to escape punishment for their crimes in recent years. It's not hard to watch American Psycho and be reminded of accused rapists and harassers who are given lenient sentences or not punished at all.

It should come as no surprise, then, that American Psycho was adapted by a female screenwriter, Guinevere Turner and also directed by a woman, Mary Harron. While the source novel, written by Bret Easton Ellis, views its lead as a sort of anti-hero, the film, with its intentional "female gaze," writer Angelica Jade Bastién writes in The Village Voice, makes the film version more attuned to the pathetic nature of Patrick's self-absorption and more adequately confronts Ellis' own sexism. "Harron and Turner understand this milieu so well because knowing how to maneuver around the entitlement of men — whether it be on the street or when pitching a film — is the key to women’s survival. What did Margaret Atwood once say? Men are afraid that women will laugh at them. Women are afraid that men will kill them," she says.

And it's that ingrained fear, that women must protect themselves each and every day, is what makes American Psycho such a horrifying film. So if you want a good scare this Halloween, American Psycho might just do it, not because of its bloody and brutal murders, but because unlike ghosts or demons, there are any number of Patrick Batemans out there in the world.