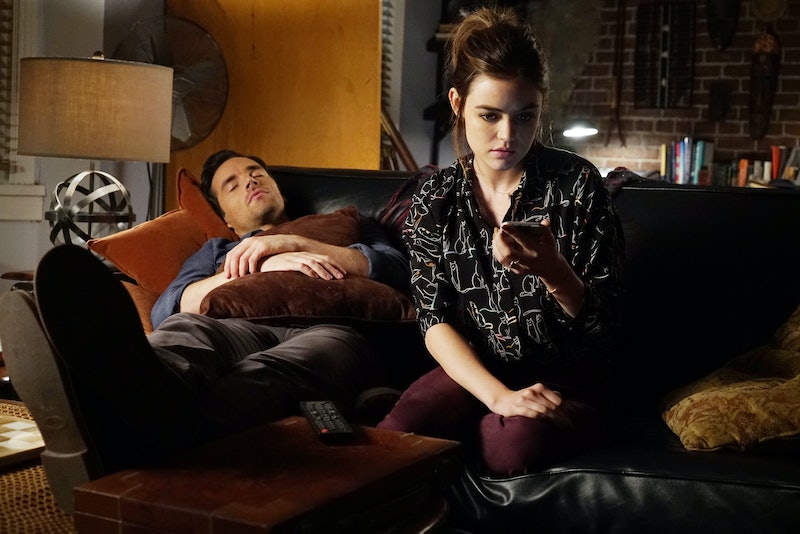 It's no secret that A (or technically, now A.D.) is the big bad on Pretty Little Liars. The series has featured its share of villains over the course of seven seasons. Not to downplay the various iterations of A's maliciousness, but there's another character worth discussing. Aria Montgomery is actually the worst. Well, you know, among the four main characters at least. And not just in the most recent season when Aria takes a trip to the dark side — black hoodie and all.

This gripe with Aria goes all the way back to the early days. If you rewind to Season 1, Aria once flips out on Emily for bringing Toby to the homecoming dance. At the time, the Liars suspected he was A, so Aria tells Emily, "Either you've got some genius plan of sleeping with the enemy, or you've lost your mind." Oh, how the tables have turned, huh? Since in Season 7, Aria throws fake blood all over Emily and Alison's nursery after joining the A team. She also steals Lucas' comic before Hanna can get to it. Basically, she turns her back on her friends.

In some scenarios, it's hard to blame the once-pink-haired teen for her actions. Yet throughout the show overall, Aria is undeniably selfish. Whether that comes to situations with her family, or even her relationship with Ezra, it's all about Aria — all. the. time.

Sure, she was upset, but this was a little extreme.

Or Threatens To Rat Out Her Dad

Again, families are complicated, but in Season 2, Aria gets mad that her parents don't want her dating Ezra and contemplate sending her to a boarding school. As a result, Aria threatens that she could tell her dad's college he's dating a grad student, if she really wanted. Her mom later tells her she doesn't even recognize her anymore.

Her Relationship With Ezra (In General)

Sure, fans have shipped Ezria all along, but in doing so, they're basically glossing over the fact that their relationship starts on a problematic foot — when she's his underage student. Not only that, but they both lie when they first meet: She pretends to be a college student, while he fails to mention that he's writing a book about Aria and all her friends.

She Cheats On Her Boyfriend Liam

Remember Liam? No? It's OK, his role was pretty minor. After the time jump, Aria is dating Liam. However, she breaks up with Liam to be with Ezra — but not until after making out with Ezra. Sure, some fans were excited because this meant Ezria could happen, it's still a shady way for it to go down.

And Joins The A Team

It doesn't matter that she got caught, she still turns her back on her best buds. As the Liars say when they called her out, Aria should've just told them from the start.

Everything She Does While Helping A.D.

She not only blackmails Spencer's dad, but Aria also destroys Emily and Alison's nursery. It's just straight-up vicious. While it's clear the actions weigh on Aria's conscience, that doesn't stop her from going through with it.

It's well-understood that A.D. is awful, but Aria has her share of groan-worthy moments that repeatedly get swept under the rug. She may be a beloved protagonist, but it's a bit problematic that the characters and the show keep looking past all of her flaws. Sure, no one is perfect, but let's stop putting Aria on a pedestal once and for all — she already has Ezra to do that anyway.

Editor's Note: A previous version of this story incorrectly referred to Liam as Aria's fiancé, instead of her boyfriend.