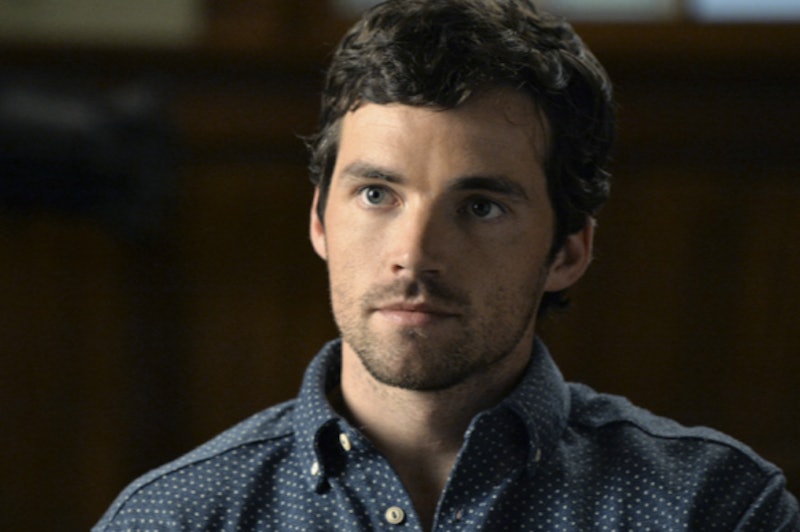 Fans of Pretty Little Liars have to wait until Spring 2017 to watch the second half of Season 7. This gives us all more than enough time to speculate about who A.D. actually is. Several of the characters are suspects at this point — with Spencer looking particularly guilty right now — but there's only one person I hope turns out to be A.D. when the show finishes. Even though there are reasons to believe his innocence, here are some of the clues that Ezra is A.D. on Pretty Little Liars . He's the only sensible choice, as far as I'm concerned.

My favorite moment of the series so far was when it looked as though Ezra Fitz, Aria's beloved and one-time English teacher, was A. In the midseason finale of Season 4, we saw Ezra in what we thought was his lair, and, through the rest of the season, he was completely creepy. At the time, it turned out that he wasn't A (although he had been surveilling the group since way before he started teaching them at Rosewood High, which is more than a little... worrying). Ezra's excuse for spying was that he was writing a book about Alison's disappearance, but OK. OK, Ezra.

Here's why there's still a possibility that everyone's favorite professor could turn out to be A.D. when Pretty Little Liars ends.

Ezra had video cameras set up in multiple locations, had research files on all of the Liars, and moved to Rosewood specifically to research Alison's disappearance. Does that sound creepy to anyone? Anyone?

2. He Keeps Secrets Almost Too Well

Ezra is usually keeping several important secrets at once. His relationship with Aria was kept under wraps, despite the fact that he was teaching her and working with her mom at Rosewood High. He knew Alison before she disappeared, but failed to mention this to anyone in her life. He spent years researching his true crime book by following the Liars around. Ezra is too good at keeping secrets. He's a pro.

Aria had a nightmare in Season 4 Episode 1, in which she dreamed that Ezra was arrested for their inappropriate relationship. But that was just a dream, and there weren't any serious or legal repercussions for his dating a student, when there probably should have been. Aria's ex-boyfriend Liam was less than impressed with Ezra, and compared his behavior to Nabokov's Lolita.

4. He Has A Violent Streak

He might keep it well hidden, but Ezra's temper is simmering under the surface.

5. He's A Sociopath When It Comes To Relationships

From ex-fiancée Jackie Molina who threatened to expose Ezra's relationship with Aria to high school girlfriend Maggie Cutler who claimed she'd given birth to Ezra's son, the teacher's track record with relationships isn't great. Add into the mix the fact that he had a thing for Alison before she disappeared, and it starts to seem as though Ezra has a habit for developing inappropriate relationships. Since Pretty Little Liars flashed forward in Season 6, Ezra has even been hanging out with a group of his former students. Ill-advised.

Alison rejected his advances. What better motive is there than that?

7. He's Gained The Trust Of Everyone Around Him, Despite Everything

Ezra has everyone on side, even Aria's parents. How is that even possible?

9. He Lives In Rosewood

Still. Even though he's not writing the true crime book about Alison anymore. Despite everything. Maybe Ezra lives in Rosewood for a reason?

10. He Hung Around With Alison Before She Disappeared

One of the creepiest things about Ezra, which places him high on the A.D. suspects list, is that he knew Alison, and was even romantically linked to her — or hoping to be.

11. He Knows Everything About The Liars

He may treat Emily, Spencer, and Hanna as friends now, but he was surveilling them for years, documenting every aspect of their lives. He knows everything there is to know about Rosewood's favorite girl gang.

Remember when Ezra Fitzgerald changed his name to Ezra Fitz? He claimed it was because he wanted to break away from his family, but what if it was for another reason?

13. He Dated One Of His Students, Lied About It, & This Went On For Years

I don't need to explain this one, do I?

Whenever something bad happens, Ezra is out of town on business. Coincidence?

Basically, Ezra Fitz is A.D., and now you know.