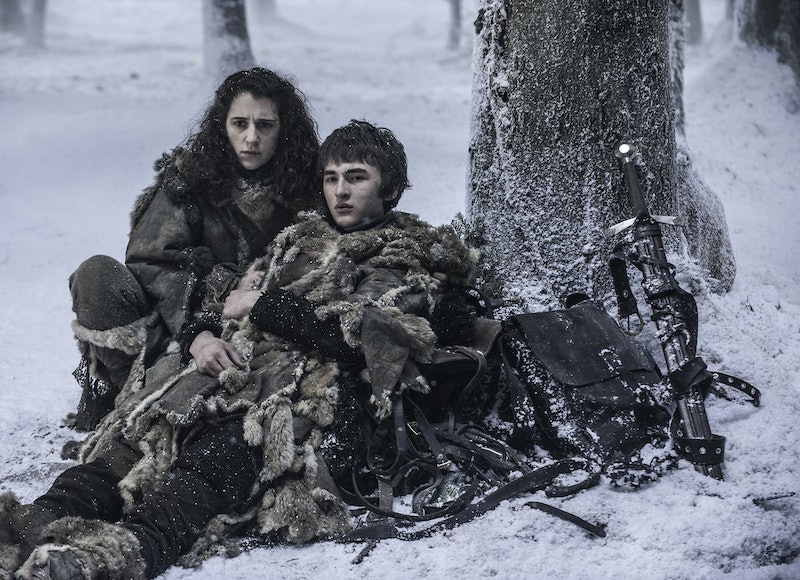 The return of Game of Thrones also means the return of fan theories, but, despite the speculation, Bran Stark is probably not the Night King on Game of Thrones. It would be a fun twist for the showdown between good and evil and light and dark to come down to Jon Snow and his own brother, but the elements of the theory that lead would lead us to suspect Bran just don't hold up.

Is it interesting that, when Bran witnessed the stabbing that caused the Night King's transformation, he clenched his fist right beforehand and regained consciousness in the same position? Absolutely, that is interesting. But is it strong enough to go up against the fact that Bran and the Night King are separate characters and we've seen them interact? Absolutely not. In most cases, that fact alone would be enough to dispel the theory that these two are one and the same. But since Bran can warg into the bodies and minds of other creatures, it does leave a little wiggle room.

At present, the list of non-animals that Bran has been able to warg into is limited to one: Hodor, a non-magical human. Even that possession was hard-won and devastating to everyone involved: It destroyed Hodor's mind, lost Bran his best friend and closest ally, and left the audience emotionally wrecked.

With that as his most recent humanoid warging experience, it's unlikely that Bran would be eager to jump right into another body in the future. And, even if he was, it's even more unlikely that he has the ability to warg into one of the most powerful humanoid characters we've been introduced to yet. We watched the Night King raise an entire battlefield of the recently killed at Hardhome with a slight movement of his arms, so this is not an easy nut to crack. It would take a severe increase in power in a very short time for Bran to be able to achieve this feat.

Plus, even if you ignore all the other evidence and imagine that they are somehow the same character, why then would the Night King have to mark Bran in order to find him again? Wouldn't he have known from the beginning where Bran was because they're the same person? It seems much more likely that they're two distinct characters whose actions will draw them closer and closer to each other until the inevitable clash.

This is especially true given the popular fan theory that Bran will instead warg into a dragon, based on a literal interpretation of the Three-Eyed Raven telling Bran he will never walk again and will instead fly. Sure, as PopSugar points out in the above link, this could mean metaphorically flying through time, but even if he does that and becomes the Night King, the Night King still walks. Warging into a dragon, on the other hand? Being able to do that would make him one hell of a worthy opponent for the Night King.

Essentially, the leaps of logic required to make the twist of Bran and the Night King being the same person work are just too much, even for a fantasy series. It's far more likely that we're being set up for an epic battle where the most underrated Stark is the true key to pulling out the win.

More like this
Gwendoline Christie’s Partner Is Part Of Royal Family History
By Parry Ernsberger and Sophie McEvoy
The 'PLL: Original Sin' Creators Say A’s Identity Will Be “Very Clear” By The Season Finale
By Alyssa Lapid
'The Sandman’s Ending Is A Departure From Neil Gaiman’s Comic Book Series
By Kadin Burnett
Every Horror Movie Reference In The 'PLL: Original Sin' Premiere
By Alyssa Lapid
Get Even More From Bustle — Sign Up For The Newsletter