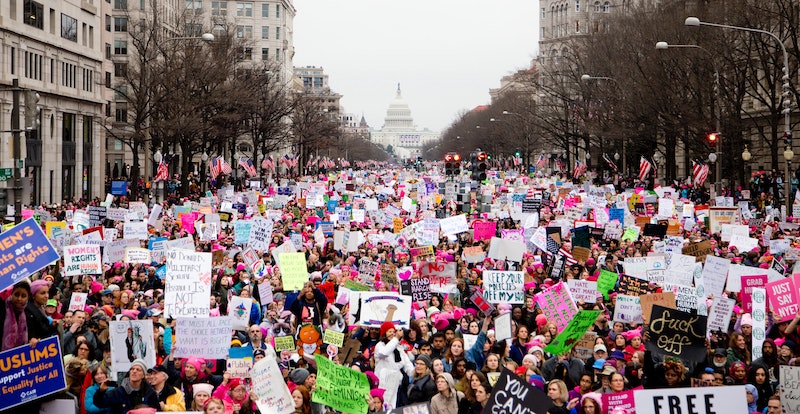 A goal of feminism (of its many diverse aims) is to ensure equality between men, women, and people of all genders. On Aug. 26, Americans celebrate that aim with Women’s Equality Day, commemorating the anniversary of women officially winning the right to vote. It’s a reminder of the progress that women have made in this country, and a call to action for all the struggles women still face daily. But the reason why we celebrate Women’s Equality Day is because of the efforts of the second-wave feminist movement, which reignited the conversation around women’s rights that’s still continuing today.

According to the National Women’s History Project, Women’s Equality Day officially commemorates the adoption of the 19th Amendment, which gave all women the right to vote, to the US. Constitution. The amendment was passed by congress on Jun. 4, 1920, and ratified on Aug. 18 of the same year. A few days later, it was officially added to the Constitution, legally guaranteeing the right to vote for all citizens. But it wasn’t until the early 1970s, amid debates about the Equal Rights Amendment (still not a thing) and “women’s lib,” that New York Representative Bella Abzug introduced a bill to designate Aug. 26 Women’s Equality Day forever.

Even though Women’s Equality Day is largely seen as a symbolic day of remembrance for the gains of the women’s suffrage movement, the events that built up the momentum for it definitely weren’t. On Aug. 26, 1970, a year before Abzug introduced her bill (and the 50th anniversary of the 19th Amendment), the National Organization for Women organized the Women’s Strike For Equality in New York City. According to Time, 50,000 women marched down Fifth Avenue, abandoning paid and unpaid work, demanding “free abortion on demand, equal opportunity in employment and education, and the establishment of 24/7 childcare centers.” As with the Women’s March and the Day Without A Woman this past year, it was a moment where mainstream society realized it could not ignore the demands of women.

The 1970s saw other significant gains for women. In 1972, the Educational Amendments law was passed, including Title IX, which prohibits gender-based discrimination in federally funded education. In 1973, the Supreme Court handed down its decision on Roe v. Wade, making abortion a constitutional right. After a long period of dormancy, feminism was once again on the national agenda, allowing women to make serious headway in the fight for true equality.

It’s important to remember, however, that despite the progress that was made, the first, second, and even third-wave feminist movements did not prioritize inclusivity as a matter of course. Even though the 19th amendment in theory guaranteed their right to vote, Black women in the south were systematically barred from voting in practice; there’s even evidence that women’s suffrage contributed directly to the rise of the KKK in the early 20th century. The second- and third-wave feminist movements’ focus on “grrrl” power excluded trans voices from the women’s equality movement, and there’s some criticism that that exclusion continues today, though some say it has gotten better.

Feminism as a movement has come a long way from the early suffragettes who fought for the right to vote, as well as the second-wave of feminism who crusaded for equal rights as a society and culture. But there’s still an enormous way to go, especially this year in particular. Legislatures across the country, enabled by the divisive rhetoric of the Trump administration, are pushing for rollbacks in voting rights, reproductive rights, immigration rights —in essence, human rights. And as Hillary Clinton famously said, “Women’s rights are human rights.” This Women’s Equality Day, take action on behalf of another woman, and thank your democratic reps who made this day possible.