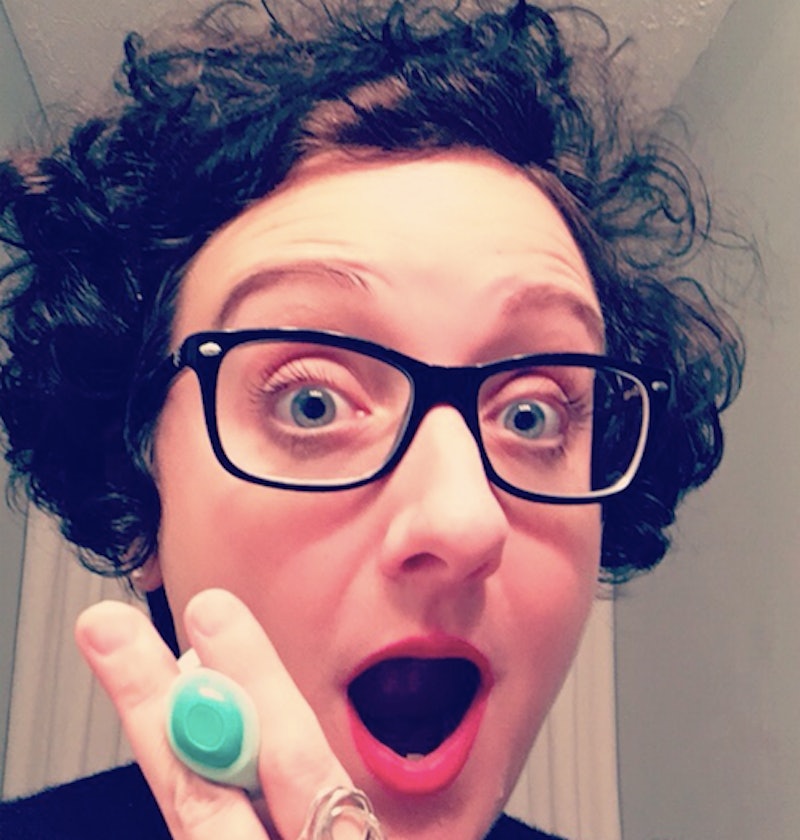 Since I first started writing about sex in 2010 (wow; now I feel old AF), sex toys have really evolved, especially in the last few years. And, in this evolution, I've been introduced to companies and products, like feminist sex toy company, Dame Products, that have, in many ways, changed my life. Yes, thanks to Janet Lieberman and Alex Fine, the women behind Dame Products, my life is better because of them.

I am definitely no stranger to sex toys. Even though I'm currently visiting my parents, the sex toys keep rolling in and, according to my subleter in my New York City apartment, sometimes she comes home to a bag of goodies that have been messengered to my apartment while she was at work. I've even received sex toys when I'm living abroad, which is part of the year. Basically, when it comes to such products, no matter where I am, I'm always knee-deep in them. This has given me the ability to be picky, to weed out the good from the bad (although very rarely is a sex toy bad, per se), but above all, have a deeper understanding of just how important it is that products are created specifically for female sexuality. If only 20 to 25 percent of women can climax during intercourse alone, then products that focus on clitoral stimulation are paramount.

“We believe that we will not have true gender equality until we have pleasure equality. Everyone has the right to sexual pleasure!”

After giving Fin a try (read: probably about a dozen times) in the last three days, I can say, without even the slightest hesitation, that Fin is the sex toy everyone needs.

Fin Is All About Women

For starters, since Fin is created by women, it is for women. When it comes to their products, Fine and Lieberman don't mess around. Everything is perfected, right down to specific details, through lots of research, and trial and error.

There's An Organic Aspect To It That's Really Appealing

When I first masturbated, many moons ago, I used my fingers. I used my fingers for a long time, because the very thought of going into a sex shop and buying a toy seemed impossible when I was teenager. (I'm from New Hampshire originally and it's not like the state has many shops that provided quality products anyway.)

There's A Speed For Everyone

While many vibrators also offer various speeds and pulse patterns, Fin keeps it simple. You get three speeds from which you can choose. With one click of the button, you can try out what works best for you. While there are only three speeds, they vary enough in stimulation that I'd be very surprised if someone couldn't find one that was a fit for what their clitoris needs.

It's Made To Travel

Not only is the size of Fin ideal for traveling, but it's been created so you can travel with it and not have to worry about it turning itself on and causing a scene. All you have to do is hold down the button for 10 seconds, wait for the red flash, then Fin cannot be accidentally turned on — as it's bouncing around in your luggage. In fact, the only way you can turn it back on at that point, is to plug it in to exit this amazingly handy travel feature.

You're Participating In Closing That Pesky Pleasure Gap

From the very beginning, Fine and Lieberman have been adamant about closing the Pleasure Gap, or Orgasm Gap — whatever you prefer to call it. Although studies have found that the Orgasm Gap is closing, especially among Millennials, men are still achieving orgasms more often than women.

“We believe that we will not have true gender equality until we have pleasure equality,” says Fine. “Everyone has the right to sexual pleasure!”

Fin is phenomenal. And that is not a word I usually use to describe anything, except for pizza, of course. The various speeds allowed me to sort of tease my clitoris, while holding off on my orgasm, so I could make it even stronger — that takes a boatload of control, FYI. When I did finally have an orgasm, well, one of the many times I had an orgasm with Fin, I had to restrain myself from singing out a loud, "Hallelujah," which, honestly, would have been a first for me.

Takeaway? You deserve Fin in your life. To echo Fine's sentiment, we all have the right to sexual pleasure and Fin is the product that's going to get your there.