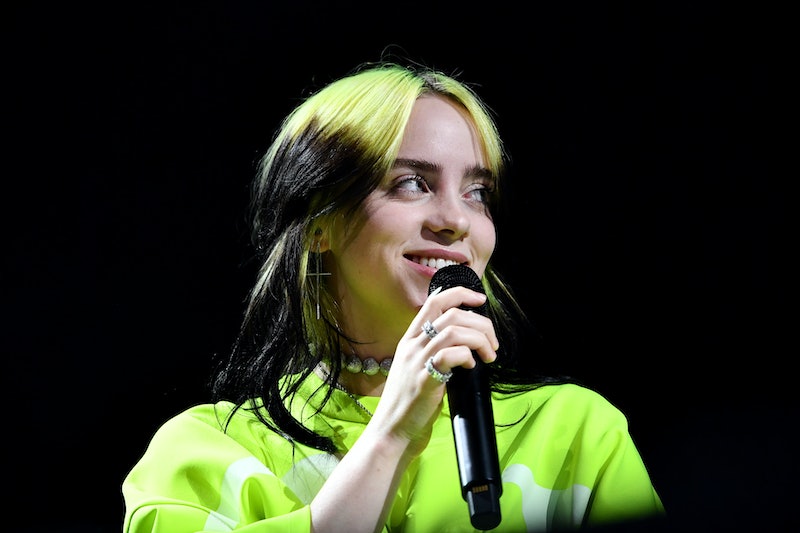 The award season party isn't over for music wunderkind Billie Eilish just yet. Fresh off becoming the youngest artist ever to sweep all four major categories at the Grammys, the 18-year-old will take the stage at the Academy Awards on Feb. 9. But the reason why Eilish is performing at the Oscars remains a mystery for now.

Generally, there tend to be two types of musical performances at the Oscars: live renditions of songs nominated in the Original Song category and an In Memoriam tribute. Eilish doesn't have a nomination this year, so it's possible that she could be singing as the In Memoriam video plays. Or she could be doing something entirely different since she's not the only artist who will be giving a special performance at the ceremony. On Feb. 4, the Academy announced that Harriet star Janelle Monáe will be performing as well — but again there's no word on what she'll be performing or why.

Despite the mystery surrounding her appearance at the Oscars, it's not surprising that the Academy invited Eilish to take part in the ceremony after her historic night at the Grammys. In 2019, Album of the Year winner Kacey Musgraves was asked to introduce Gillian Welch and David Rawlings before they performed their Best Original Song nominee "When a Cowboy Trades His Spurs for Wings." Meanwhile, Eilish not only won Album of the Year, she also took home awards for Best Pop Vocal Album, Song of the Year, and Best New Artist — and there's a good chance she'll be an Oscar nominee herself in 2021.

In January, it was announced that Eilish would become the youngest singer to ever write and perform the James Bond theme. The "Bad Guy" singer and her brother Finneas O'Connell have co-written the theme for No Time to Die, Daniel Craig's final Bond movie, which is set to hit theaters on Apr. 10. Given how close the movie's premiere date is, it's possible that Eilish will debut the highly anticipated song at the Oscars. Finneas added to the speculation during his Feb. 3 appearance on The Tonight Show Starring Jimmy Fallon, when he said that the new Bond theme would premiere "really soon, really soon."

For now, Eilish and the Academy are keeping quiet about what the four-time Grammy award winner will be doing at the Oscars. But there's no doubt that whatever brings her to the stage will be worth the wait for fans of the artist. The "When the Party's Over" singer has proven herself to be a mesmerizing performer, so it's no surprise that the Oscars enlisted her to bring a little Eilish magic to Hollywood's biggest night.

More like this
Katy Perry Regrets Not Working With Billie Eilish On “Ocean Eyes”
By Alyssa Lapid
Paul Mescal’s Family Celebrated His Oscar Nomination In The Sweetest Way
By El Hunt
Austin Butler Recalls Lisa Marie Presley Showing Him Elvis’ Bedroom
By Jake Viswanath
You’ll Definitely Recognise Isadóra Bjarkardóttir Barney’s Mum
By Maxine Harrison
Get Even More From Bustle — Sign Up For The Newsletter
From hair trends to relationship advice, our daily newsletter has everything you need to sound like a person who’s on TikTok, even if you aren’t.