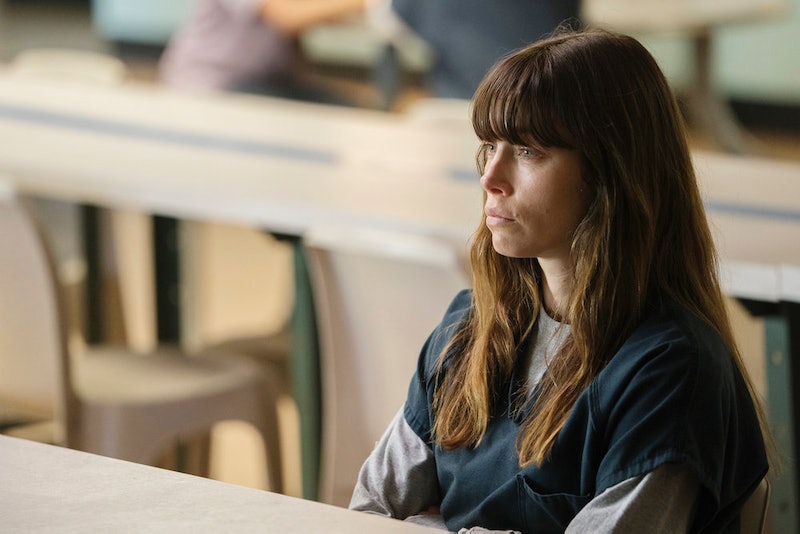 While most people would give any available information to the police when a lifetime in prison is on the table, that's not what Cora is up to on The Sinner. After Bill Pullman's Detective Harry Ambrose doesn't accept that Cora's murder at the lake was random, he interrogates her again during the second episode. Jessica Biel's Cora seemingly gives a comprehensible reason for murdering Frankie — that they had met five years ago, slept together, and that she traumatically lost the baby that she conceived during their one-night stand. Yet, before the Aug. 9 episode even ends, Harry learns that most of the story isn't true, so why is Cora lying on The Sinner? She not only seems to be hiding something, but she may not even really know the truth behind her actions.

Like some of the police involved in the case, you may have been satisfied upon hearing that there is a (kind of) clear-cut motive for why Cora murdered Frankie. Yet, there are eight episodes in The Sinner and the whole mystery is based around why Cora did what she did — so the miniseries isn't going to let viewers off that easy. Instead, Cora's intentions become even murkier in the second episode since all the lies she tells demonstrate that her life isn't as simple as the series first made it appear to be. And even her husband Mason doesn't know about her complicated past.

The fake story that Cora tells Harry is harrowing, especially since while she says her sexual encounter with Frankie was consensual, flashbacks of the incident (and with Mason) indicate that might not be the case. Yet, once Harry starts digging a bit further, he discovers that Frankie wasn't even on the East Coast on July 3, 2012, the day of the alleged encounter. That doesn't mean that all of Cora's story is a lie since a bartender corroborates that Cora was at the bar she says she was at on Fourth of July weekend five years earlier — she just wasn't there with Frankie.

Part of the reason Cora is lying seems to be that she wants to protect herself from a portion of her past that she doesn't want to relive, but another part seems to be locked in her subconscious. That's proven when Harry pushes Cora to tell the truth by putting on the song that triggered her attack at the lake in the first place. She lunges at the detective, punching him and screaming, "I'm gonna kill you." Harry realizes that she hits him in the exact pattern that she stabbed Frankie (hooray for thorough detective work!) and so there is something buried deep inside Cora's mind that results in repetitive violent actions that are set off by that song. Considering how frightening her bursts of violence are, it's no wonder that Cora doesn't want to acknowledge what's really causing them since it must be horrific.

Yet, don't let Cora's locked secrets distract you from the bold-faced lies that she tells. For instance, she says her parents are dead, but Harry finds out they are alive. That's most likely something she lies about on purpose — and yet again, who can blame her? After all, her mother told her when she was a child that eating chocolate would cause God to smite their family and kill her little sister. The flashbacks of her childhood are probably also a clue of what happened to her, but for now, they are an indication that while she is unaware of some lies she is telling, others are intentional.

Variety reported that Biel discussed her character's befuddling relationship with the truth during the pilot premiere at the Tribeca Film Festival. "(Cora) is terribly complex and complicated," Biel said. "The tracking of what she knows, what she remembers, what she thinks she remembers, what is a lie, what was told to her, and when she is lying was very complicated. We would constantly be (considering) if this is a moment where she was telling the truth or lying or is she telling the truth and it's actually a lie?" Biel also stated in a video for USA that, "The truth of her past is very complicated."

Based on Biel's assessment of her character, don't expect Cora to tell the truth in upcoming episodes of The Sinner. Instead, if you're trying to figure out her motivation, it may be more rewarding to pay attention to what she's not saying and focus on those shadowy flashbacks. Within those fragmented memories lies the truth and it's going to take Harry doing some more expert detective work to really get to the bottom of this crime — and Cora's psyche.

More like this
What’s New On Netflix: Lana Condor’s Ghostly Comedy & A Sexy Reality Series
By Arya Roshanian
Yes, Joseph Quinn Is Actually Playing The Guitar In This Epic 'Stranger Things' Scene
By Alyssa Lapid
Vecna Officially Has A Fan In 'Stranger Things' Star Jamie Campbell Bower
By Alyssa Lapid
Lizzo Proved She’s Team Jeremiah During Her ‘The Summer I Turned Pretty’ Review
By Grace Wehniainen
Get Even More From Bustle — Sign Up For The Newsletter