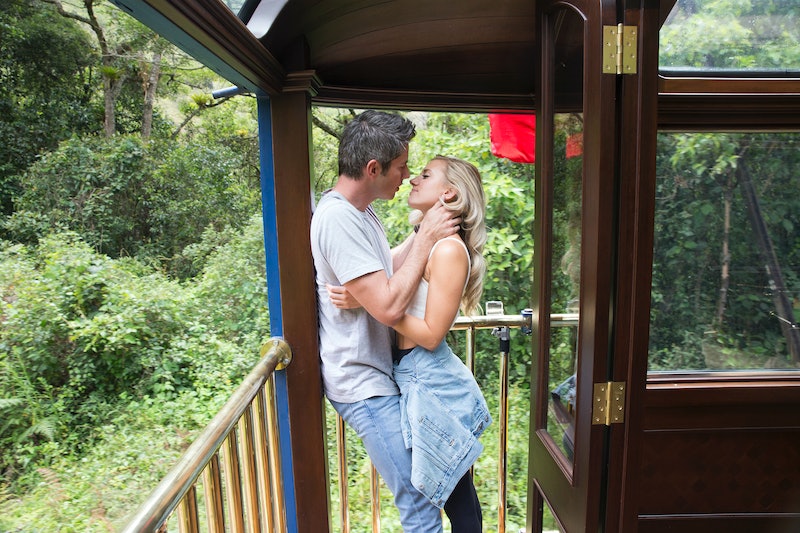 In what might actually be the most dramatic conclusion to a season yet, Arie Luyendyk Jr. proposed to Becca Kufrin on The Bachelor finale — but (plot twist!) later broke off their engagement, and is back together with runner-up Lauren Burnham. Needless to say, there was plenty of heartache and drama to go around, and more than a few people are knocking Arie for "flip-flopping" on his decision in the finale. However, it's been clear to viewers for the last several weeks that Arie's feelings for both women were growing stronger, and it's obvious that he was conflicted about who was the right partner for him.

"Arie showed a strong interest in both women throughout the episodes — but his attraction to Lauren seemed stronger — both physically and emotionally," Toni Coleman, LCSW, Psychotherapist and Relationship Coach, tells Bustle. "When he talked about these two women, he commented on how different they are — and I think they attracted him for different reasons."

Arie is hardly the first Bachelor star to be torn between two contestants (remember the Ben-JoJo-Lauren love triangle?), and given the fast-paced, hyper-romantic nature of the show, it's not hard to understand why the Bachelors and Bachelorettes almost always fall for more than one person.

To those of us watching his journey play out on TV, it might be hard to empathize with Arie — especially if you happened to be Team Becca since the limo entrances on night one. But the reality is that, as much as we might think we understand his relationships with the women on the show, only Arie knows how he truly felt, both leading up to and after his proposal to Becca. And although Becca definitely got the short end of the stick here, ultimately, it's a good thing that Arie realized he made the wrong choice and "flip flopped" back to Lauren — here's why.

Why It's OK To Change Your Mind In Love

When it comes to matters of the heart, things can get pretty messy. Regardless of whether you're looking for love on TV or out in the real world, there's always the chance that you're going to screw something up, even if you make every effort not to. As much as we might wish our feelings were always clean-cut and easy to comprehend, the truth is that we often don't know what we want right away — which can sometimes result in the need to make big, life-altering decisions in our love lives.

"It is crucial to change your mind regarding big decisions in your love life when and if there is deep-rooted doubt, as it’s not only your life that is being affected but your partner's and the life around them," Kailen Rosenberg, Relationship Expert, Elite Matchmaker, and founder of The Lodge Social Club dating app, tells Bustle. "Not only do you need to absolutely know this is 'the one’ when choosing your partner for life, it is even more important and loving for your partner that you ‘know’ so that you aren’t causing your partner to suffer in ways beyond feeling left, or ‘jilted’ in the end, if you should decide they are not 'the one.'"

Of course, if you're proposed to, only to have your engagement ring figuratively yanked from your finger weeks later, it's completely understandable if you feel jilted and bitter for a while. But when it comes to something as massively important as an engagement (or any other big relationship commitment), if something doesn't feel right and there's a change of heart from either partner, it's better for both partners to be honest with themselves — because it's absolutely OK to change your mind, even if it might hurt someone you love.

"It's too bad people don't do this more often instead of staying in long-term, unsatisfying relationships for the wrong reasons and/or going through with marriage when they have serious doubts"

"In real life, people change their minds all the time," Coleman says. "People break up with long-term partners that they live with, talked marriage with, and in some cases are engaged to. It happens because something just isn't right or isn't working or they have met someone who feels much more right for them. It's too bad people don't do this more often instead of staying in long-term, unsatisfying relationships for the wrong reasons and/or going through with marriage when they have serious doubts."

If Arie was having doubts about whether Becca was the right partner for him in the long-term, it's better that he realized those feelings after only a few weeks as opposed to years down the line — when a breakup would hurt even more.

Does Being The Second Choice Mean It Won't Last?

Obviously, being left high and dry by the one you love is devastating, but it's unlikely that Becca is the only one dealing with the emotional fallout of this awkward scenario. Lauren might have "won" in the sense that she (eventually) ended up with Arie, but I'd imagine it's not easy to feel like the second choice — even if it was her that Arie really wanted all along. So what does that mean for couples who get together after someone changed their mind? Can it survive, or will doubts, insecurities, and resentment about being chosen "second" creep in and ruin their budding connection?

"Whether one’s ‘second choice’ has a lesser or greater chance of working out has everything to do with how emotionally connected and mature each side of the equation (couple) is, as well as how truly in love, lust, or infatuation one is or was with the partner prior; whether it was healthy love, or not," Rosenberg says. "Flip flopping may not be fun to experience on either side of the equation, yet it is far better for both to flip flop than getting it wrong further down the road, especially in marriage and or with children, where the damage can be far greater. Regardless, whether one is the flip or the flop, neither has a better chance of success, it is about the genuine connection and ability to be authentic where both in the relationship feel safe, joyful and loved."

If the mutual love and connection between Arie and Lauren is as genuine as it appears, I have no doubt that they'll be able to communicate and work through any complicated feelings this whole convoluted scenario has left them with. Ultimately, though, only time will tell whether Arie and Lauren's love was built to last, or whether their made-on-TV romance will eventually fizzle out, as so many Bachelor relationships do.

And as difficult as it was to watch the sweet, lovable Becca get her heart broken this season, we can take solace in the fact that Arie clearly wasn't the right partner for her, simply by virtue of the fact that he chose Lauren over her in the end. Plus, there's one silver lining: we might now get to see an entire season of The Bachelorette with Becca as the leading lady — but either way, here's hoping she finds true love soon (on-camera or off).