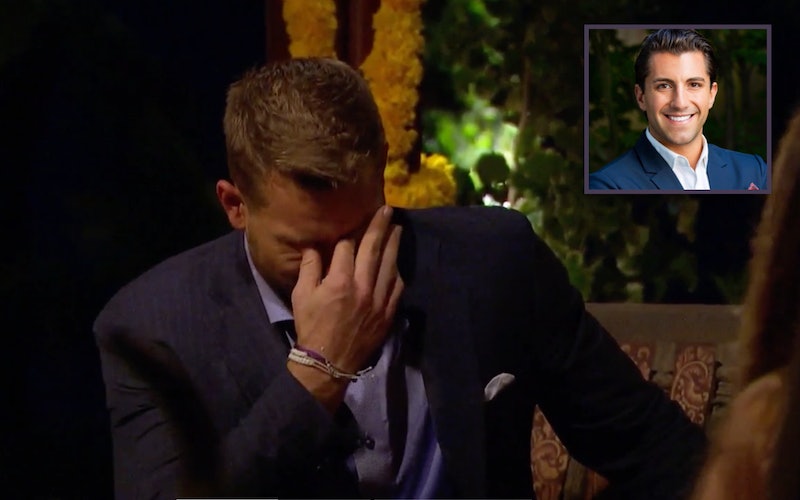 While competing on Becca Kufrin's Bachelorette season, Jason Tartick experienced love and heartbreak on national television. Now that he's been through it all, he has plenty of words of wisdom for new contestants, and he's dishing all to Bustle. Read what Jason has to say about which of Colton's women on The Bachelor aren't here for the right reasons and more in this week's recap.

There is one word to describe this episode and it is DISARRAY. Episode 6 opened with Chris Harrison coming to the rescue of the women, Colton, and all the viewers by interrupting Onyeka and Nicole's “disagreement." Shortly thereafter, both Nicole and Onyeka were eliminated at the rose ceremony. And elimination turned out to be a common theme, as we saw five of the ladies go home in this action-packed episode. Let’s break it down.

It’s clear that Colton’s perception of Hannah G. is much different than that of the women in the mansion. While Colton is openly expressing his deep feelings for Hannah G., the camera quickly cuts to Caelynn and Cassie mentioning how they feel like “they’re missing something with her." With all the disarray in the house and confusion sparked by exiting women, this certainly is a concern for Colton. That said, it definitely looks like there is a strong connection between Colton and Hannah. Their conversation, body language, and non-stop smiling points to a genuine relationship. Yet I can’t seem to shake Cassie and Caelynn’s comments.

Kirpa and I have at least one thing in common: We were both non-existent on the show prior to Episode 6! That said, I thought she was a breath of fresh air. She was authentic and well spoken, and I also appreciated that she openly communicated her support of the other girls as opposed to letting it deter her from being the best version of herself with Colton. While I was happy to see Kirpa get the one-on-one rose, I felt that Colton’s connection with Hannah G. was significantly stronger than Kirpa's.

Could Colton Underwood be our modern day Chuck Norris? Those karate moves to open this date up were on fire! The only one who impressed me more than Colton was Hannah B. with her karate skills.

While this date was pretty physically taxing, it apparently was mentally taxing, too. It's important to note, group dates really are so challenging. To incorporate being fun, attentive, competitive and loving all while you're with a group of new friends that are all dating the same person is not easy. This leads me to Sydney’s self-induced exit. By week six, it becomes apparent who has strong connections and who does not, which is why Sydney left. She was aware of her feelings and was very mature in how she handled that situation.

For me, the group date winners were Tayshia, Hannah B., and Cassie. Hannah B. and Tayshia are really developing their relationships as this show progresses! As for the dearly departed Demi, I didn’t know what to expect when the scene cuts to Demi with thunder and lighting firing off in the background as she made her way to Colton’s place. I was predicting a very outlandish conversation or action, but in actuality it did not go that way — it was Demi pouring out her heart to Colton. I have to imagine thus far breaking up with Demi was one of the hardest moments for Colton. It has to be a heart-wrenching to hear someone tell you that they're falling in love with you while you're breaking up with them in the same conversation. Is it too early to ship Demi and Jordan in Paradise this summer?

It was also difficult to watch Katie’s departure. She seemed very sweet, and yet she, too comments on the intentions of the existing girls. It's theme that started with Caitlyn from Toronto and has progressed to almost every girl that’s had a post-departure conversation with Colton— they all are worried about the motives of some still left in the house. I trust that Colton will get to the bottom of that.

We know a few things going into next week. The physical intimacy is certainly there with the women, but we need less making out and more “You’re my life partner” conversations. Colton is falling in several directions. I think he has really solid connections with several girls — Tayshia, Hannah B., Hannah G., Cassie, and Caelynn — but he also has concern for the true intentions of the remaining women and the legitimacy of their feelings for him. When and how will all the dust settle?