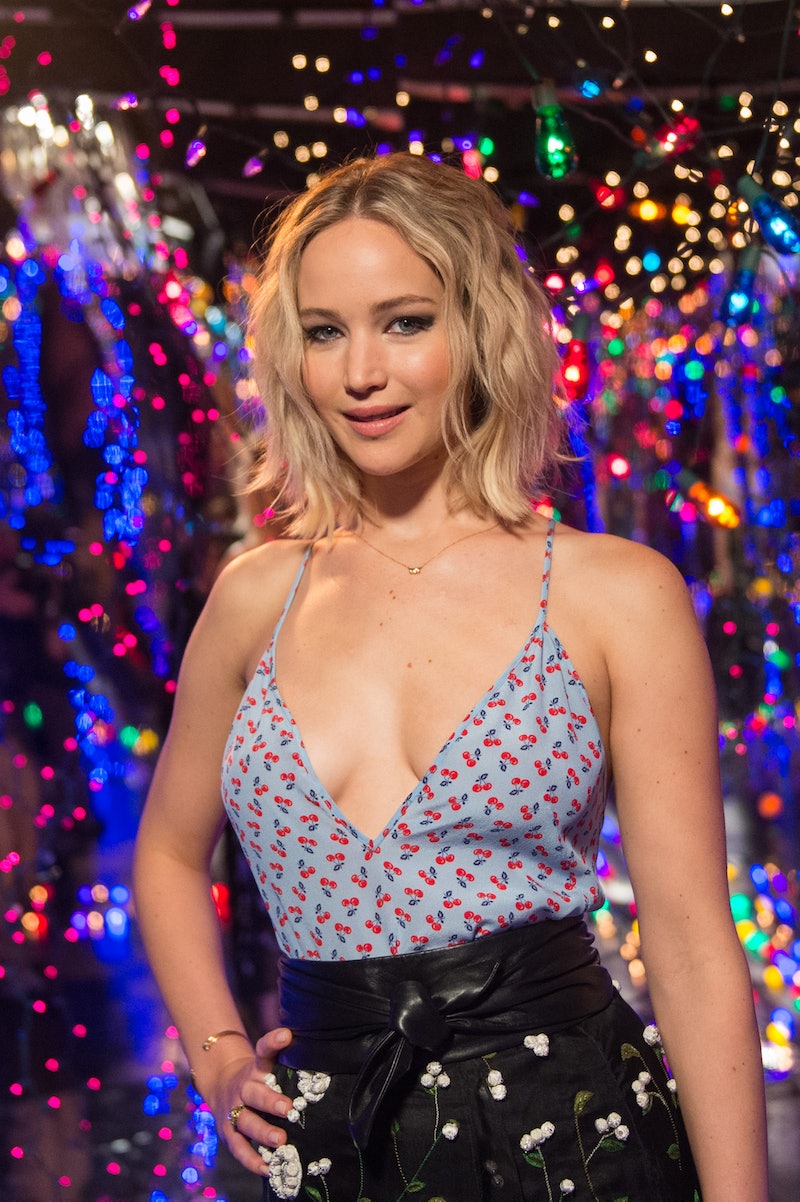 Jennifer Lawrence's latest film, Mother!, comes out Sept. 15, and it's already re-awakening a conversation that's been had many times over: that J.Law is playing a character far older than she actually is. In Mother!, Lawrence, 27, plays the wife of Javier Bardem, 48, and while it's customary in Hollywood for younger female actors to be paired with older men, Lawrence is a specific case, because it seems with each new movie she's is in, she's aged another decade. Audiences rarely see her, a star often called the "most relatable actress in Hollywood," ever play relatable 20-something characters. The reason for this? Industry sexism. For a female actor to get truly meaty roles, she has to portray older women, not ones her own age. And for Lawrence, that means being miscast in much older roles, over and over again.

According to a Time study, female actors' careers peak at age 30, and they begin to decline around age 35. Meanwhile, male actors' careers peak around age 46, then they decline around 51. This, unfortunately, makes sense, as in our society, men are seen as becoming sexier and more authoritative with age, while women are seen as losing both their appeal and innocence as they get older. As such, Lawrence's love interests, in films like Silver Linings Playbook and American Hustle, are often much older than her. But for Lawrence herself, in order to get good, Oscar-worthy roles at the age of 27, she must move to play characters drastically older than her actual self.

You see, movies that are deemed awards-worthy are rarely about women in their 20s, and ever since Lawrence was nominated for Lead Actress for Winter's Bone back in 2010, she's been on a path set apart from most of her contemporaries like Anna Kendrick, Emma Watson, and Kristen Stewart. Those actors often play women in their 20s, in movies that rarely get Oscar-nominated or earn major acclaim. Lawrence's films, meanwhile, nearly always rack up the awards. There are exceptions, of course. Saoirse Ronan's Oscar nomination for Brooklyn, in which she played a 20-year-old, is one, but in that same year, Lawrence was nominated for Joy, in which she portrayed a woman in her mid-30s. Ronan is 23 and Lawrence is 27, yet that four-year age difference warrants a decade's difference in character ages, by Hollywood norms.

Lawrence has commented on her frequent over-aging. In a 2015 interview with the New York Times, she said, "It’s not like I was old enough for American Hustle. And I was way too young for Silver Linings [Playbook]. That’s why I almost didn’t get it." It's understandable why she's drawn to these parts, as, as said, movies where 20-something actors portray women their own age or younger are rarely taken seriously. Looking at past Oscar-nominated films, many of them feature young female actors, but very few are actually about women in their 20s.

In order for actors around Lawrence's age to star as protagonists in big-budget films, they usually have to be in comedies or superhero/comic-based films. For example, we have Kendrick in the upcoming Pitch Perfect 3, Cara Delevingne in Valerian and the City of A Thousand Planets, and Zoë Kravitz in Rough Night, films that, while possible box office successes, don't reach Lawrence's movies' levels of acclaim.

If you look at the nine films nominated for Best Picture at the 2017 Oscars, only one of them, La La Land, features a young female protagonist. 2016's Best Picture nominees included Room (which is about a 24-year-old mother) and Brooklyn (as mentioned above), and none of 2015's picks were about women at all. Complex female characters are hard to come by for female actors of all ages, but those in their 20s are especially hard-pressed to find scripts about dynamic women close to their own age.

This, of course, is ridiculous. Sure, with age you gain experiences, but being a mother and/or wife shouldn't be the only things that classify a woman as interesting. Hollywood's message is clear, though: if young female actors want to be in Best Picture-worthy films, they likely need to play older roles, like Lawrence does.

But even when they do, their actual young age prevents them from playing as capable characters as they'd probably like. Director David O. Russell, who cast Lawrence in his films, Silver Linings Playbook, American Hustle, and Joy, has said that her innocent youthfulness is a lead factor in what inclined him to cast her as women in their 30s. In 2015, he told The Hollywood Reporter, "She can still play the child effortlessly. Bradley Cooper and I would always say, ‘Is she 10 years old or 50 years old?’ She’s both, and that’s a special thing."

In each of her films with Russell, Lawrence played a woman in her 30s; in the latter two, she has multiple children, and in all three, she's either married, divorced, or widowed. Russell seems to love that Lawrence can convey childish-like characteristics even when cast in mature roles, and that's no surprise. The idea that a woman should be able to be both sexy while remaining innocent has long been a standard in our culture, which places a premium on youth while also frequently objectifying women. Due to this, most of Lawrence's roles, especially those that've earned her acclaim, portray her as being both attractive and messy. In Silver Linings Playbook, she plays a gorgeous but unhinged widow; in American Hustle, she's an unhappy, incapable housewife; in Joy, she's a divorcee who, despite eventually gaining agency, is originally floundering and immature.

In none of her roles as older women is Lawrence necessarily confident. Aside from Joy, she rarely plays a woman with much agency over her life, and that messiness can be harmful. By constantly playing women who aren't put-together, Lawrence inadvertently reinforces harmful stereotypes of women being unable to handle responsibilities. It's not just in her Russell-directed movies; in Mother!, Lawrence plays a woman who seems to be paranoid, gaslighted, and psychologically haunted in her own home. Once again, she's an older woman living in the domestic sphere who's gorgeous and appealing, but can't keep her cool.

An actor actually in her 30s or 40s would've likely been better suited to play Bardem's wife in Mother!, but like Russell, director Darren Aronofsky (who Lawrence happens to be dating now) probably found his star's youthfulness a key part to her playing the older role. The film does seem to be about a woman's husband and friends gaslighting her into thinking she's going mad, and so Lawrence's youthful vulnerability likely makes her character more convincing. But still, we all know that the actor is undoubtedly capable of playing a more autonomous character at her own age, too — it's a shame Hollywood apparently isn't interested in letting her find that out for herself.

More like this
Sandra Bullock, Girlboss Extraordinaire
By Matt Harkins & Viviana Olen
'Dirty Dancing's Jennifer Grey Wants Harry Styles To Be The Sequel’s Love Interest
By Grace Wehniainen
Laura Dern Said “Cultural Awareness” Made Her Rethink This 'Jurassic Park' Fact
By Grace Wehniainen
'Doctor Who’s New Star Is Already Huge On TikTok
By Maxine Harrison
Get Even More From Bustle — Sign Up For The Newsletter