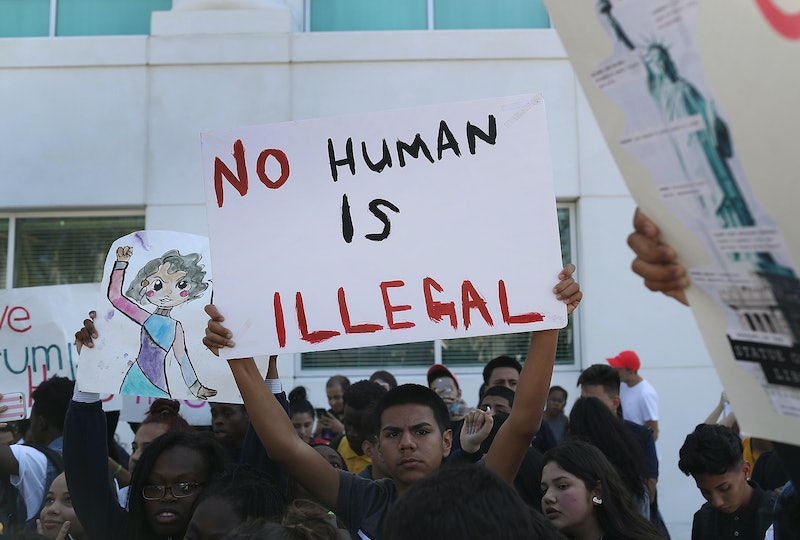 Immigration activists and advocates took to Twitter Tuesday night to express grief and anger over the case of Juan Manuel Montes — a 23-year-old DREAMer who said he was deported despite being protected twice under the Deferred Action for Childhood Arrivals (DACA) program established under President Obama. While many rallied behind Montes and shared the story of his pending lawsuit, others weren't so kind, pointing out the fact that Montes has a criminal history. However, that part of the story should be irrelevant, because when it comes down to it, Montes is a human being who was removed from the home he's known since he was just nine years old.

The Atlantic's David Frum responded to the story with a clinical list referring to Montes' apparent record. Meanwhile, Iowa Rep. Steve King posted a photo of a beer, toasting the Borders and Customs agents and taking a swipe at Montes. While neither tweet makes any effort to show sympathy or humanize Montes, both serve similar purposes and promote the same dangerous myths about undocumented immigrants in the United States.

Much like when Trump referred to some immigrants as "bad hombres," reductively referring to a man as merely a list of minor offenses or just a "non-valedictorian" offers a taste of the callous attitudes toward undocumented people in this cultural conversation. Both Frum and King use their own dehumanizing tactics — like, literally not referring to him as a man—to code him as unworthy of sympathy just because his record isn't absolutely 100 percent spotless.

It's particularly troubling, as noted by the many folks replying to Frum on Twitter, that the crimes Montes is accused of include the kind of trouble that tons of teens growing up in the United States get into. They include things like shoplifting, using fake IDs (mostly for underage drinking), or driving without licenses and, anecdotally, the commenters said they faced few consequences. Though, to be clear, they may have benefited from racial privileges their peers don't have. Still, the Department of Homeland Security claimed that around 1,500 DACA recipients lost their protections due to criminal convictions.

The media uses the "good immigrant v. bad immigrant" narrative to hold immigrants to standards that we don't impose on citizens.

So when individuals with a particular amount of clout (like, say, a politician on the state or federal level) make these kind of rhetorical choices, it further elevates the dichotomies of "good" immigrants and "bad" immigrants that are divided by an increasingly narrow, maybe even arbitrary margin.

Meanwhile, the reductive ideas do little to foster a sense of compassion or empathy in anyone — particularly when we're talking about immigration policy, undocumented people, and the various bureaucratic red tape and other heartbreaking realities surrounding deportation.

Ultimately, it doesn't take a lot to see Montes as a very real person — just reading over the statement from his lawyers announcing his lawsuit gives you insight into his life: how he studied welding, worked in agriculture (with a permit) to support his family and, of course, how he really, really misses the country he's lived in since he was nine. But, then again, you shouldn't need all that information to afford him that personhood (and maybe muster up a little bit of kindness)— ideally, that should be a given.