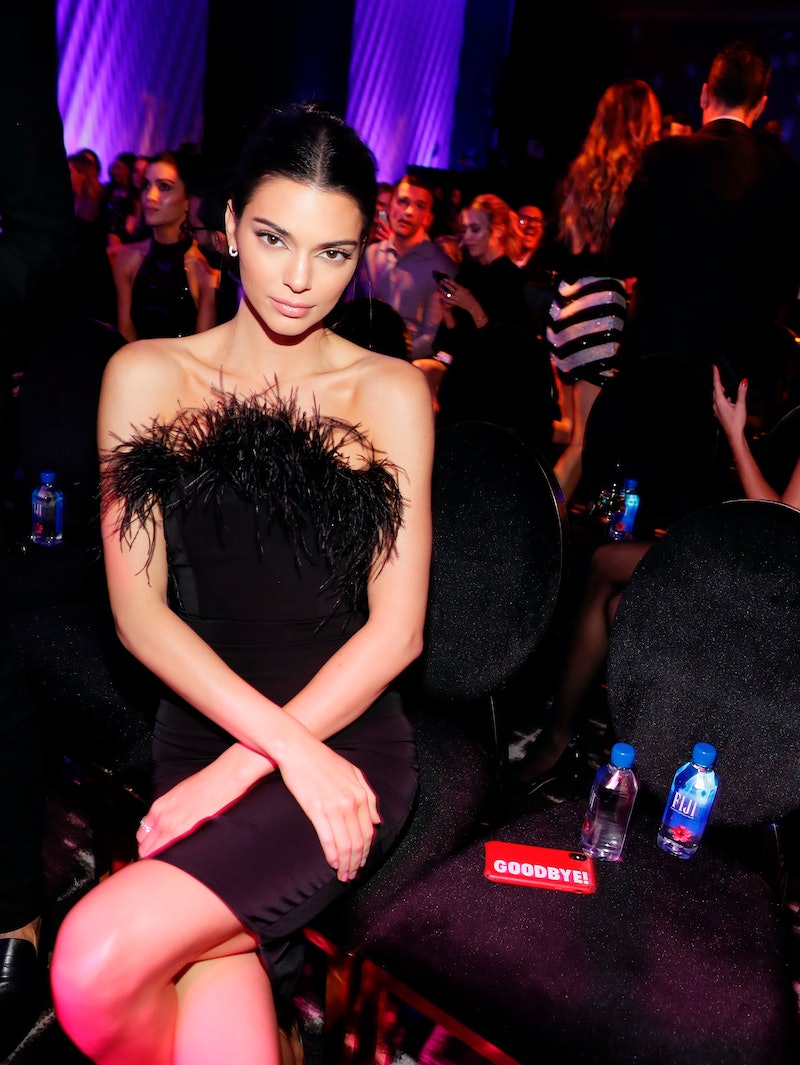 When the Kardashians unveiled their last minute Christmas card on Instagram on Christmas Eve, there was one major element that caught fans' by surprise — besides, of course, the card's existence in the first place. While the card featured four of the famous sisters, Kendall Jenner was missing from the 2018 Kardashian Christmas card, which left many fans wondering about the reason behind her absence.

However, while there may have been plenty of family drama in the quest to make last year's elaborate holiday card, there is actually a very simple explanation for why Kendall isn't in this year's photo. According to big sister Kim, who first unveiled the Christmas card via Instagram on Dec. 24, the model had a work commitment that kept her from being able to pose for this year's photo shoot.

"The day of this card last minute [we] realized we were all together so we had all of our kids come meet us. Kendall and my mom rushed to a meeting after this shoot so this is what we have! As many of us as possible!" Kim explained in the caption of her Instagram post.

In other words: Don't expect another Christmas card-related screaming match on the next season of Keeping Up With the Kardashians.

While Kendall might not have been present for the adorable family photo shoot, she is still feeling plenty of love this holiday season, thanks to her big sister, Khloé. On Monday morning, the Good American founder shared some sweet messages to all of her siblings on Twitter, explaining, "My siblings are the dopest, purest souls!! So proud of them for their growth!"

"You vitalize me," Khloé wrote to Kendall, in the middle of her family love-fest. The reality star and mother of one also noted that her big sisters, Kourtney and Kim, "inspire" and "motivate" her, respectively, and that baby sister Kylie "encourage[s] me."

"You strengthen me @robkardashian," Khloé tweeted, adding, "Mommy you love and invigorate me."

The new mother has been feeling lots of love for her family this holiday season, writing on her own Instagram post of the Kardashian Christmas card that "So far this is by far my most favorite of any Christmas." Khloé added, "I have all I could ever want ✞ FAMILY."

Khloé has been very open about how happy she is to finally be a mother, and how much joy her 8-month-old daughter, True, has brought to her life. In October, she shared a photo of her daughter on social media, along with a gushing caption about how motherhood has changed her: "I probably dreamt about you my entire adult life. You have exceeded every expectation I had of you! This is LOVE," Khloé wrote.

And back in July, she tweeted, according to the Daily Mail, that parenthood has been "amazing! Of course it’s an adjustment but it’s so beautiful! Sometimes I don’t know what day it is or I don’t get a shower LOL. But she is finally on a great sleep schedule so I get adult time which is awesome!"

With all of the new additions to the famous family this year, it's no surprise that the Kardashians are filled with love and joy this holiday season — and Khloé is happy to spread as much good cheer to her siblings as possible